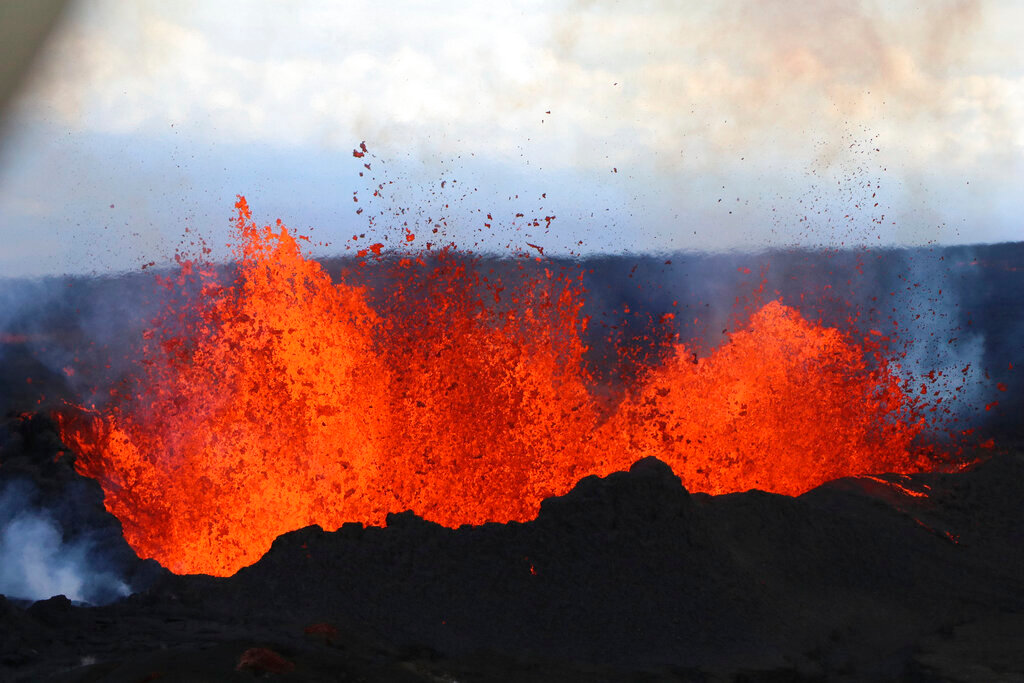 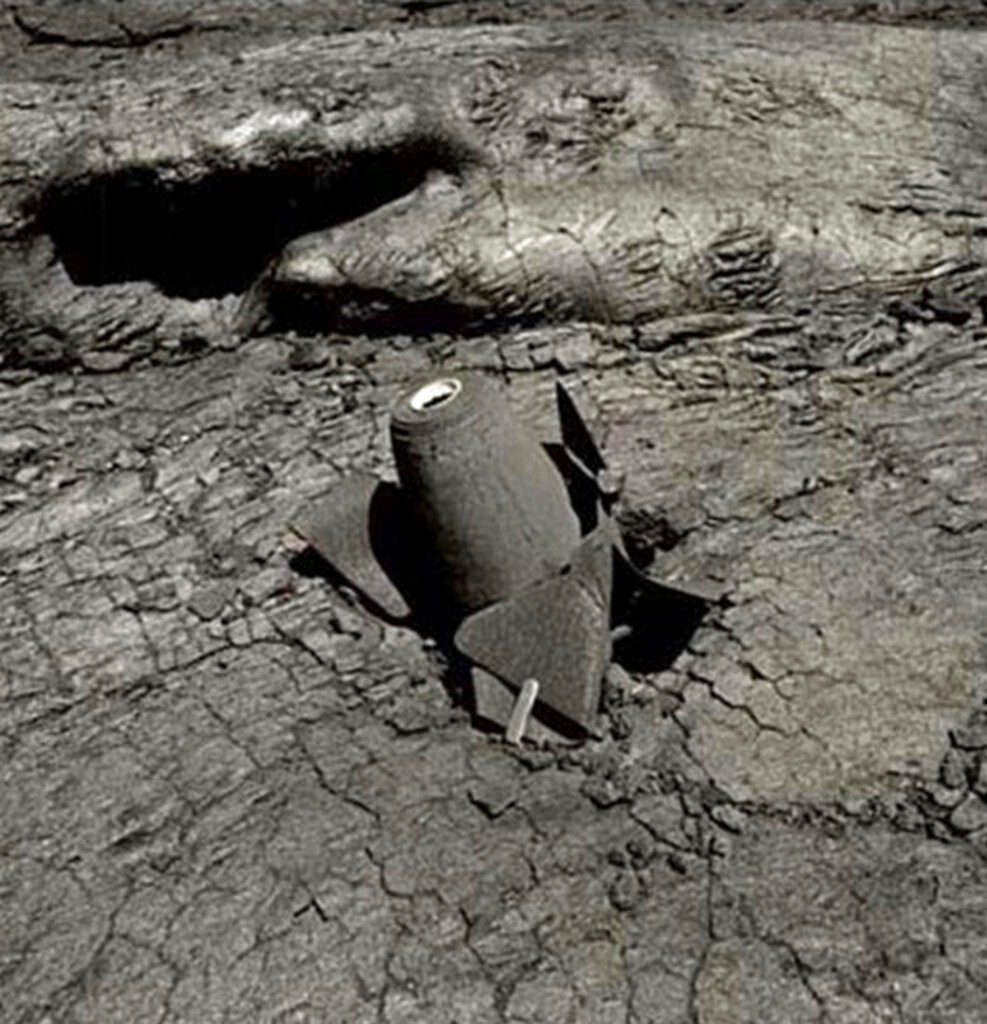 One of the bombs dropped on the Mauna Loa 1935 flow. Now Mauna Loa — the world's largest active volcano — is erupting again, and lava is slowly approaching a major thoroughfare connecting the Big Island's east and west sides. (Jack Lockwood/USGS Photo via AP)
Previous Next
Posted Thursday, December 1, 2022 9:26 am
By AUDREY McAVOY, Associated Press

HONOLULU (AP) — Prayer. Bombs. Walls. Over the decades, people have tried all of them to stanch the flow of lava from Hawaii's volcanoes as it lumbered toward roads, homes and infrastructure.

Now Mauna Loa — the world's largest active volcano — is erupting again, and lava is slowly approaching a major thoroughfare connecting the Big Island's east and west sides. And once more, people are asking if anything can be done to stop or divert the flow.

"It comes up every time there’s an eruption and there’s lava heading towards habited areas or highways. Some people say ‘Build a wall’ or ‘Board up’ and other people say, ‘No don’t!,’” said Scott Rowland, a geologist at the University of Hawaii.

Humans have rarely had much success stopping lava and, despite the world’s technological advances, doing so is still difficult and dependent on the force of the flow and the terrain. But many in Hawaii also question the wisdom of interfering with nature and Pele, the Hawaiian deity of volcanoes and fire.

Attempts to divert lava have a long history in Hawaii.

In 1881, the governor of Hawaii Island declared a day of prayer to stop lava from Mauna Loa as it headed for Hilo. The lava kept coming.

According to the U.S. Geological Survey, Princess Regent Lili'uokalani and her department heads went to Hilo and considered ways to save the town. They developed plans to build barriers to divert the flow and place dynamite along a lava tube to drain the molten rock supply.

Princess Ruth Ke'elikōlani approached the flow, offered brandy and red scarves and chanted, asking Pele to stop the flow and go home. The flow stopped before the barriers were built.

More than 50 years later, Thomas A. Jaggar, the founder of the Hawaiian Volcano Observatory, asked the U.S. Army Air Services to send planes to bomb a Mauna Loa vent to disrupt lava channels.

Lt. Col. George S. Patton (who later became famous as a general in Europe during World War II) directed planes to drop 20 600-pound demolition bombs, according to a National Park Service account of the campaign. The bombs each had 355 pounds of TNT. The planes also dropped 20 smaller bombs that only had black powder charges.

Jagger said the bombing helped to “hasten the end of the flow,” but Howard Stearns, a U.S. Geological Survey geologist onboard the last bombing run, was doubtful. In his 1983 autobiography, he wrote: “I am sure it was a coincidence.”

According to the park service, geologists today also are doubtful the bombing stopped the lava flow, which didn’t end with the bombing. Instead, the flows waned over the next few days and didn’t change paths.

Rowland said authorities could use a bulldozer to pile a big berm of broken rock in front of Daniel K. Inouye Highway. If the terrain is flat, then lava would pile up behind the wall. But the lava may flow over it, like it did when something similar was attempted in Kapoho town in 1960.

Rapidly moving lava flows, like those from Kilauea volcano in 2018, would be more difficult to stop, he said.

“It would have been really hard to build the walls fast enough for them. And they were heading towards groups of homes. And so you would perhaps be sacrificing some homes for others, which would just be a legal mess,” he said.

He said he believes most people in Hawaii wouldn’t want to build a wall to protect the highway because it would “mess with Pele.”

If lava crosses the highway, Rowland said officials could rebuild that section of the road like they did in 2018 when different routes were covered.

Hawaii County’s director of civil defense, Talmadge Magno, said Wednesday the county has no current plans to try to divert the flow, though he has had some discussions about it.

Hawaii Gov. David Ige, who was governor during the 2018 Kilauea eruption, told reporters his experience showed him it's not possible to overcome nature and Pele.

Thinking you should physically divert lava is a Western idea rooted in the notion that humans have to control everything, said Kealoha Pisciotta, a Native Hawaiian cultural practitioner. She said people need to adjust to the lava, not the other way around.

“We are not separate from nature," she said. “We are a part of nature.”