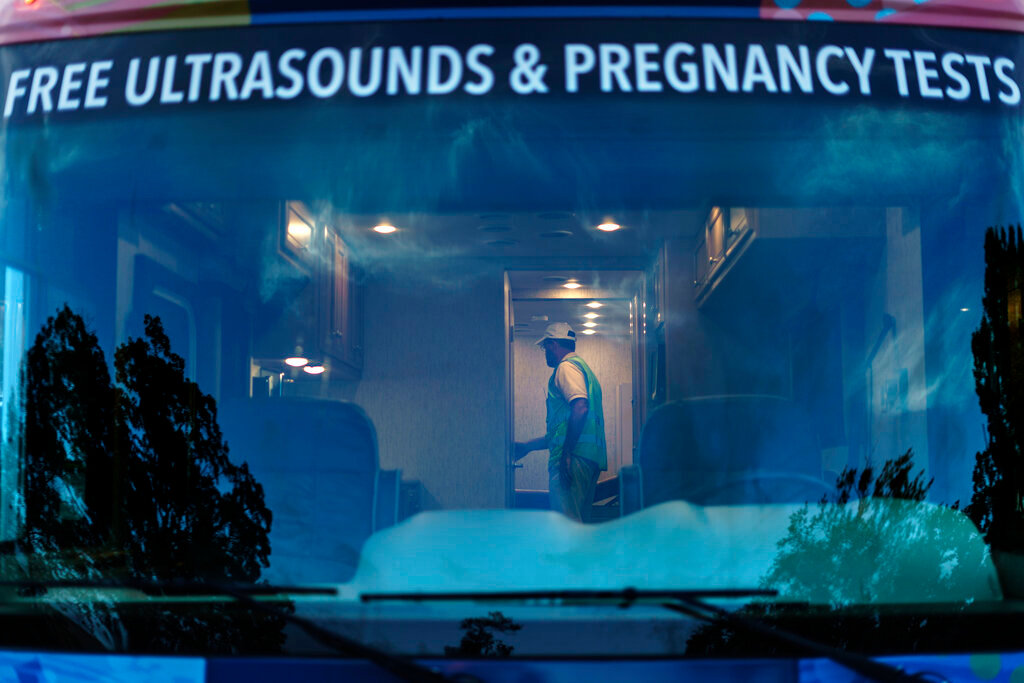 Mark Baumgartner, founder of the anti-abortion group, A Moment of Hope, works in an RV outfitted with an ultrasound machine on Friday, May 27, 2022, in Columbia, S.C. (AP Photo/David Goldman)
Posted Tuesday, June 21, 2022 12:18 pm
By HENRY DURAND, The Christian Index

ATLANTA – Abortion rights activists have ramped up attacks on pro-life organizations and individuals as the U.S. Supreme Court prepares to release a ruling that could overturn the 1973 Roe v. Wade decision.

Some pro-life organizations have had their buildings fire-bombed. Others have been vandalized and had messages spray-painted on their walls.

The threat scrawled on the Wisconsin Family Action office said, “If abortions aren’t safe, then you aren’t either.”

“The message that we’ve really been telling our pro-life team is stay the course but stay vigilant,” said Suzanne Guy, president and founder of the Georgia-based group Life Initiatives and Values. “Of course, everything we do is wrapped in kindness and compassion, but we will not stop fighting to protect the babies in the womb, and we will not stop loving their moms.”

Abortion rights activists have also targeted churches, with nearly naked protesters disrupting services. Three young women stripped to their underwear and shouted slogans during a service in early June at Lakewood Church, which is led by Pastor Joel Osteen. A woman wearing only fig leaves shouted pro-abortion slogans while standing on a pew at a Roman Catholic church in Michigan.

A Wyoming abortion clinic that had been scheduled to open in mid-June was damaged by arson. Police are looking for a suspect seen on surveillance video carrying a red gas can.

“During this time of heightened tensions, I would advise Christian women’s centers to be especially prayerful and vigilant,” said Mike Griffin, public affairs representative for the Georgia Baptist Mission Board. “We know that we are living in difficult days, but we also know that God has not given us a spirit of fear. We must continue to press on to protect innocent human life and to minister to our mothers knowing that God will give us the grace to move forward.”

A bulletin issued on June 7 by the Department of Homeland Security references the increasing threat of violence, though it did not differentiate between pro-life and pro-abortion rights groups. “In the coming months, we expect the threat environment to become more dynamic as several high-profile events could be exploited to justify acts of violence against a range of possible targets,” the bulletin reads. One of those “high-profile events,” of course, is the upcoming Supreme Court decision on abortion.

On June 8, a man carrying a gun, a knife and pepper spray was arrested outside the home of U.S. Supreme Court Justice Brett Kavanaugh. Nicholas John Roske, 26, of Simi Valley, Calif., told police he was upset about the leaked draft opinion in the abortion case. He was indicted June 15 by a federal grand jury, charged with attempting to murder a U.S. justice of the United States.

The arrest was followed by passage in the House of a bill that would provide around-the-clock protection to the families of Supreme Court justices. The bill, which was passed by the Senate last month, was signed into law by President Joe Biden on Thursday.

The bill was prompted, in part, by pro-abortion activists protesting outside the homes of Supreme Court justices on May 7.  Justice Samuel Alito and his family were moved to an undisclosed location in response to those protests.

Federal law prohibits protests outside “a building or residence” used by a judge, with the “intent of influencing any judge.”

“In 2022, simply being a Christian or being pro-life seems to be sufficient cause for angry radicals to call in threats, graffiti your door, or firebomb your office,” McConnell said.

The FBI said in a statement last week that it is “investigating attacks and threats targeting pregnancy resource centers and faith-based organizations across the country.”

Fed: Sharply higher rates may be needed to quell inflation
WASHINGTON (AP) — Federal Reserve officials were concerned at their meeting last month that consumers were starting to anticipate higher inflation, and they signaled that much higher interest rates could be needed to restrain it. The policymakers also acknowledged, in minutes from their meeting released Wednesday, that their rate hikes could weaken the economy.
Georgia monument damaged by bomb
ELBERTON, Ga. (AP) — A rural Georgia monument has been bombed, damaging one of four granite panels that some people have dubbed “America's Stonehenge.” The bombing comes weeks after a Republican candidate for governor claimed the Georgia Guidestones are satanic and called for their demolition.