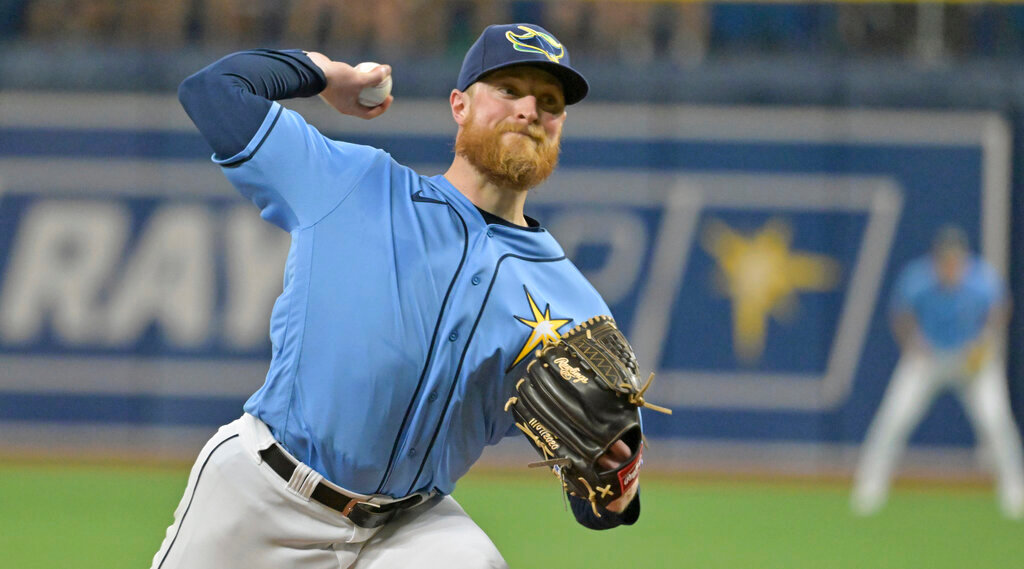 ST. PETERSBURG, Fla. (AP) — Drew Rasmussen took a perfect game into the ninth inning, and the Tampa Bay Rays expanded their lead over Baltimore for the final AL wild card to 1 1/2 games with a 4-1 victory over the Orioles on Sunday.

Rasmussen allowed his first baserunner when Jorge Mateo doubled down the left-field line on the first pitch of the ninth. Mateo, who went 5 for 5 on Friday night, later scored on a Rasmussen wild pitch.

The right-hander struck out seven in the longest outing of his career. He threw 62 of 87 pitches for strikes.

“I’ll take it," Rasmussen said. "It helps our team’s chance of winning. When our team has a chance to win a game, that’s first and foremost, the most important thing.”

Jason Adam got two outs for his sixth save, finishing a one-hitter.

Rasmussen (7-4) struck out Rougned Odor on a 2-2 pitch to end an eight-pitch at-bat for the second out in the eighth.

Baltimore’s Adley Rutschman flew out to the warning track in center in the first. Former Ray Brett Phillips had a hard drive buzz Rasmussen with two outs in the sixth, but shortstop Taylor Walls fielded the ball and threw to first for the out.

“They started hitting balls at our guys,” Rasmussen said. “You look back even in the first inning, that ball Rutschman hit to center was well struck. Felt really good when the day starts off that way, giving up some hard contact and it finds a glove.”

“Any outing like that is incredible to watch,” Walls said. “I wish he could have got through it, done it, but still such a great outing.”

Rasmussen was coming off three no-hit innings in his previous start Aug, 7 at Detroit, an abbreviated outing to manage his workload for the season. His longest career start had been seven innings on June 4 against the Chicago White Sox.

“We just stayed with the same game plan going into that last inning," Mateo said through a translator. "We weren’t trying to change anything. Credit to the pitcher. He pitched a really good game.”

There hasn’t been a perfect game in the majors since Seattle’s Felix Hernandez accomplished the feat at home against the Rays on Aug. 15, 2012.

Tampa Bay has never thrown a perfect game. Matt Garza has only Rays no-hitter, coming on July 26, 2010, at Tropicana Field against Detroit.

Randy Arozarena hit a three-run homer off Jordan Lyles (9-9) with two out in the third. Arozarena has 15 homers and 38 RBIs in 37 games against Baltimore. It was his second home run in 10 at-bats off Lyles.

Lyles was charged with four runs and five hits in 4 1/3 innings. He had won his last three starts.

David Peralta hit an RBI single in the fifth off Joey Krehbiel, who replaced Lyles with two on.