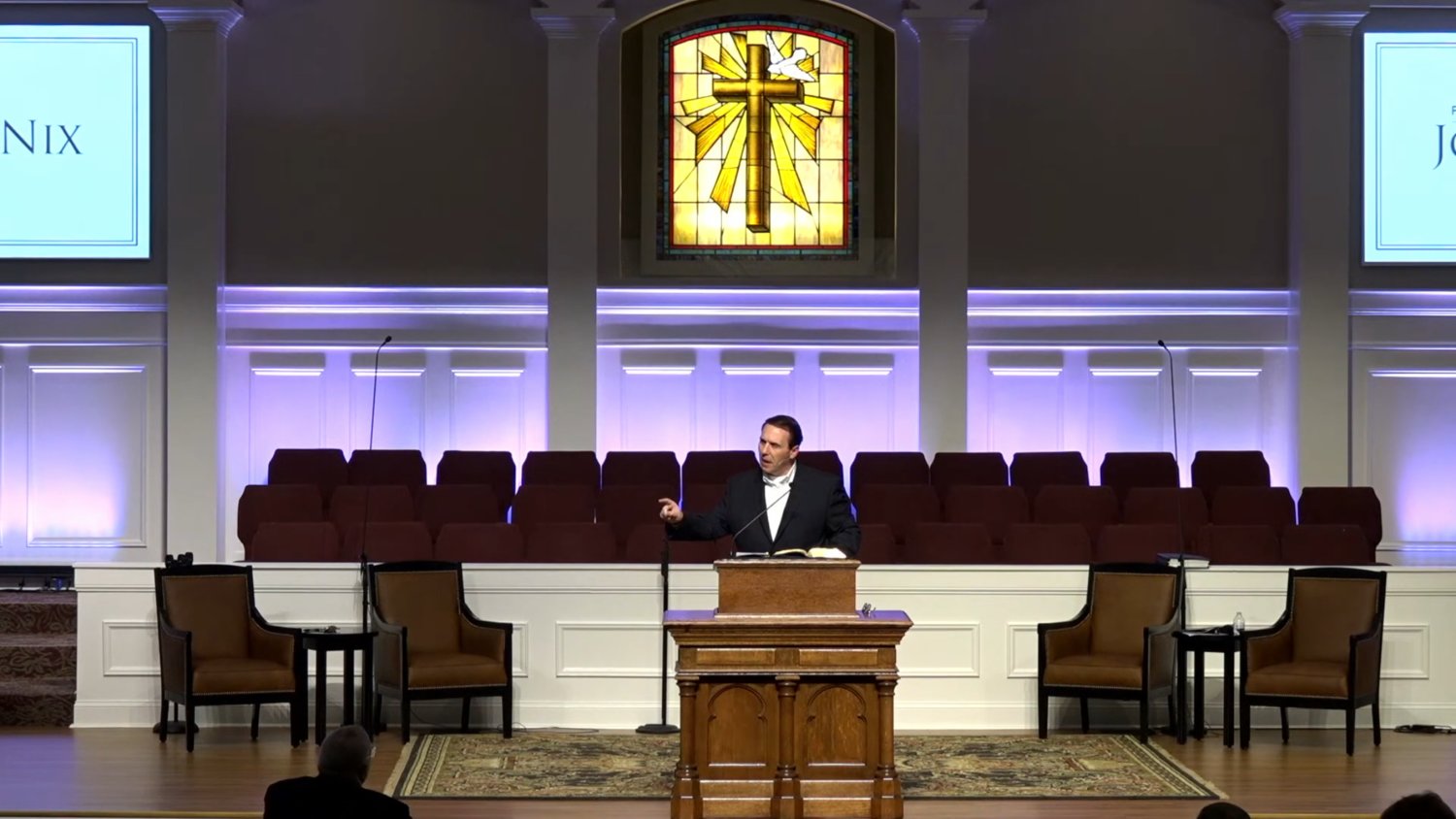 Pastor Johnny Nix preaches from the beautiful pulpit which symbolizes the centrality and sufficiency of the Word of God at Pickett’s Mill Baptist Church. COURTESY/Johnny Nix

DALLAS – History is all about successes and failures, wins and losses, prosperity and poverty, blessings and curses, and both noble and ignoble individuals. The rise of “cancel culture” is comprised of individuals bent on erasing the elements of history contrary to their ideology or their notions of what is right and what is wrong. However, history can no more be erased than our sins can be washed away apart from the blood of Christ. 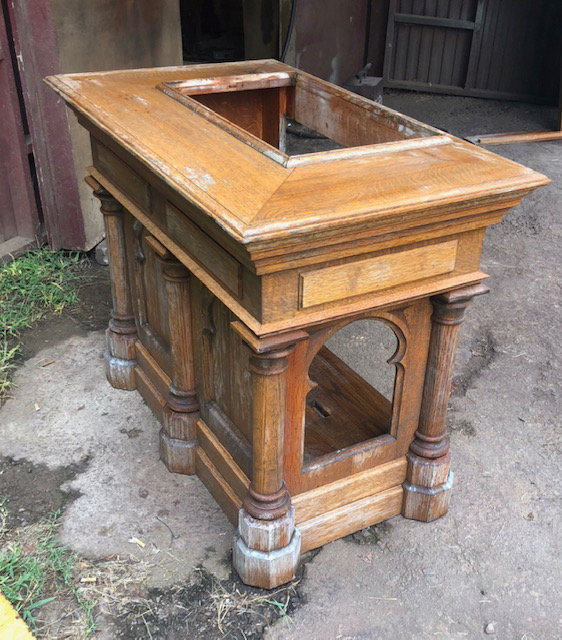 The pulpit that Pastor Johnny Nix secured from Conklin Forks United Methodist Church in Binghamton, New York. His wife, Hannah, looked at the old unkempt and dilapidated “sacred desk” and exclaimed, “You have bought the ugliest pulpit I’ve ever seen.” COURTESY/Johnny Nix

Johnny Nix, pastor of Pickett’s Mill Baptist Church in Dallas, has an appreciation for history and has acquired a replica from the past to adorn the newly renovated worship center of the Dallas church. While the renovation was taking place, Nix was actively searching for a pulpit that would provide the capstone or the crowning piece of furniture for the refurbished facility.

His quest for just the right pulpit led him to the eBay website and to an antique dealer who had in his possession a pulpit from the Conklin Forks United Methodist Church in Binghamton, New York. Nix recalled, “The antique dealer had already sold the pews from the church but explained that the pulpit was in such bad shape that no one wanted it.”

Nix continued, “He told me that the lady who sold it on behalf of the church said that a famous songwriter had stood behind the old pulpit to sing on three separate occasions, including the first Sunday the new building was opened in 1903. He also assumed that the pulpit was built in 1903.” When Nix asked for and received pictures of the pulpit, it was obvious that it was in ill repair. He added, “When the antique dealer called me back to see if I received the photos, he informed me that the songwriter who sang from that pulpit was Fanny Crosby and asked, ‘Have you ever heard of her?”

Fannie Crosby (1820-1915) was an American mission worker, poet and hymnist. Her illustrious career is exceedingly impressive. Even though she was blind she was known as the “Queen of Gospel Song Writers”.  Among the 8,000 hymns she wrote are Praise Him, Praise Him, To God Be the Glory, Rescue the Perishing, Near the Cross, All the Way My Savior Leads Me, and Tell Me the Story of Jesus.

Nix fired the same question back at the antique dealer who indicated, “I don’t have a clue.” As it ended up, the PMBC pastor negotiated with the owner and got the pulpit for $800.00 and that included the shipping.

“Two months later the pulpit arrived,” Nix announced. “When it was delivered, my wife, Hannah, called me and said, ‘You have purchased the ugliest pulpit I’ve ever seen. It is ruined.”

Nix explained, “The reason I purchased it was its connection to Fanny Crosby. I received a letter from an older lady who recalled her mother speaking of the significance of Crosby reciting her poems with piano music and being accompanied by a female soloist as they visited their church. I could only imagine that pulpit sitting in our newly remodeled building as a symbol of a godly heritage that will continue until Jesus comes. 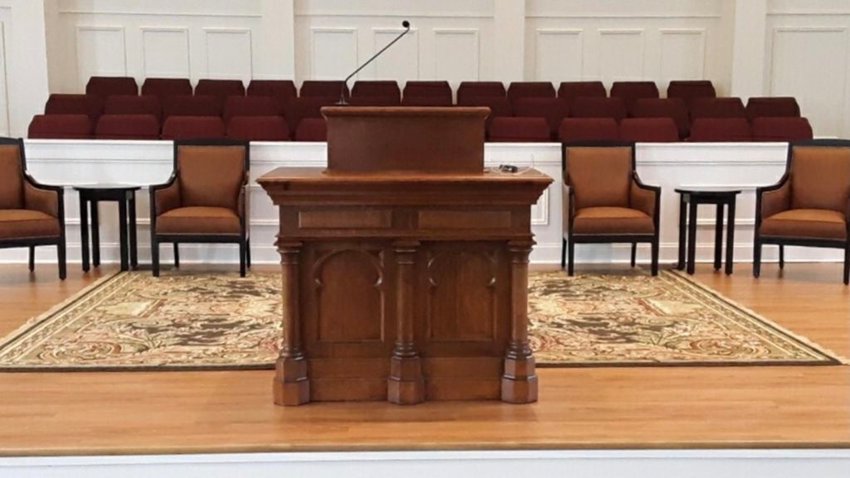 The refurbished pulpit from which the great hymn writer, Fanny Crosby, once recited her poetic works has become the centerpiece in the worship center for Pickett’s Mill Baptist Church in Dallas. COURTESY/Johnny Nix

“I imagined the congregation singing ‘Blessed Assurance’ or an invitation being given with ‘Pass Me Not, O Gentle Savior’ being sung by the choir or congregation and the minister of music standing behind the sacred desk once graced by the presence of Fanny Crosby.”

The Pickett’s Mill pastor shared his burden to restore the pulpit with Ray Clark, a devoted member of the church. He promised to pay for the restoration of the pulpit. Nix added, “When the work was completed the members of the church loved it. The felt like the pulpit was an enhancement to the preaching of the Word that has characterized Pickett’s Mill from its inception.”

With the pulpit in place, the renovation of the worship center was complete. The people of the church decided they would use the pandemic to beautify their facilities. It was challenging for several reasons: (1) There was uncertainty about the economic impact such a venture would have on the church; (2) The church by-laws required a by-proxy vote; and (3) The plan for the building would have to be communicated to the church via YouTube. The renovation would cost the church $412,000. The plan was revealed to the membership; and the church approved the plan by a 97 percent vote. Furthermore, reserved funds were used to pay for the renovation, so it was not necessary for the church to borrow money to pay for the attractive makeover.

Nix reported, “Calvin Thompson led the way forward with our building and grounds team. It took nearly four months to complete the project; and we have already recovered 70 percent of the money taken from our reserved funds to pay for the restoration. The sanctuary has many modern updates and is beautifully designed with the pulpit sitting front and center on the platform as a testimony to the centrality and sufficiency of the Word of God at Pickett’s Mill.”

The PMBC pastor decided to use the newly refurbished facility to host a revival March 7-10 to the great delight of the congregation, many of whom have borne witness as to how refreshing and heart-warming it was after a year of pandemic. (Taylor Gillaspie was the evangelist and the Mylon Hayes family provided the special music).

Nix stated, “In each service, it was like sitting in the presence of God. We are more convinced than ever as a church that revivals still work. We are passionate about the truth that our church, like many others, must be an agent of gospel change in this declining culture.”