Religious liberty amid a pandemic: Southern Baptist leaders weigh in 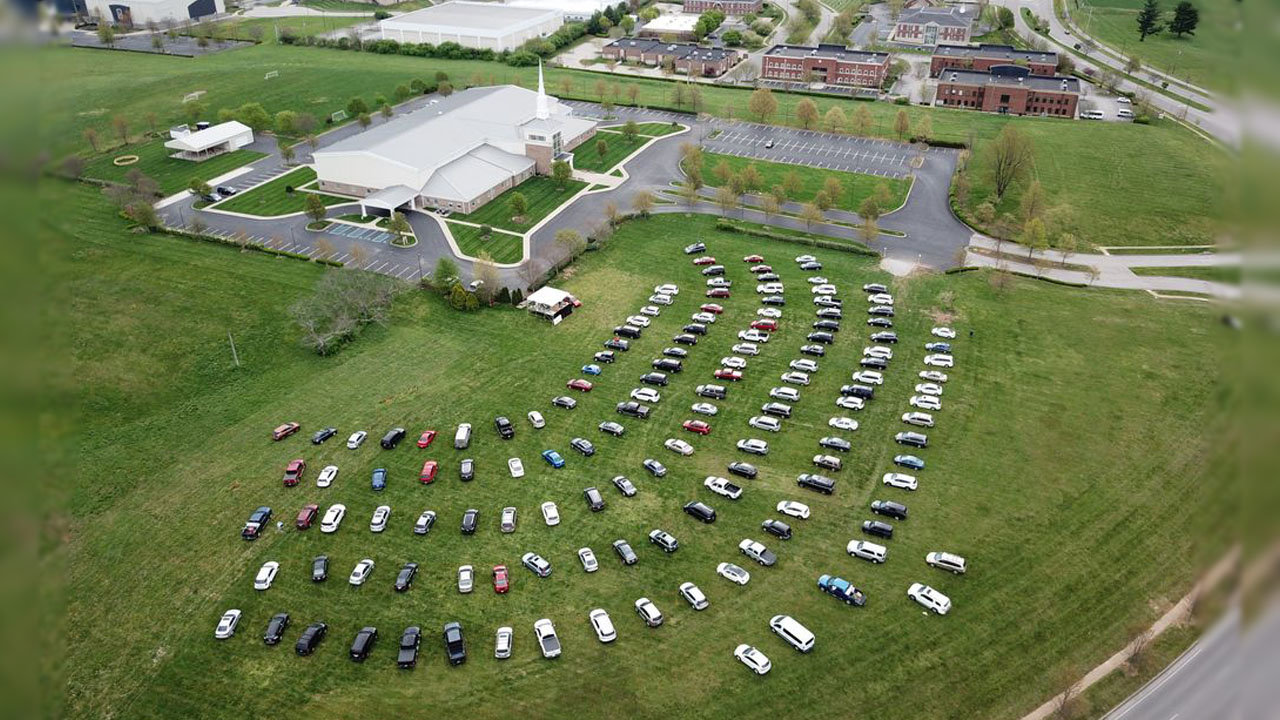 Ashland Avenue Baptist Church in Lexington, Ky., was one of many around the U.S. to hold "drive-in" services on Easter Sunday, where worshipers remained in their cars and tuned in to the service on the radio. TWITTER/Special
Posted Wednesday, April 15, 2020 2:55 pm
Baptist Press

Ashland Avenue Baptist Church in Lexington, Ky., was one of many around the U.S. to hold "drive-in" services on Easter Sunday, where worshipers remained in their cars and tuned in to the service on the radio. TWITTER/Special

Mayors in Louisville, Ky., and Greenville, Miss., barred "drive-in" worship services days before Easter, resulting in objections from Christian leaders and lawsuits by the churches involved. A federal judge temporarily blocked the Louisville action April 11, enabling a church to go forward with its "drive-in" Easter worship plans the next day.

The limited conflicts between local governments and congregations have occurred as most Southern Baptist churches and other religious groups throughout the United States have canceled in-person worship gatherings in cooperation with public officials to help prevent the spread of the virus. More than 584,000 confirmed cases and 24,485 deaths had been reported in the country at the time of publication April 14, according to Johns Hopkins University.

While many churches have been using online video platforms for worship since mid-March, others have been hosting "drive-in" services in their parking lots. Typically, people remain in their cars while the pastor preaches using radio equipment during such services.

Russell Moore, president of the Southern Baptist Ethics & Religious Liberty Commission, wrote in an April 11 column, "Except for a few instances, most governments are not acting inappropriately or using overheated rhetoric against churches. A few bad actors have indeed communicated poorly, though, causing people to believe that they will start shutting down or surveilling churches, in ways that, at least, could be perceived as overstepping the right boundaries recognized in our First Amendment."

Moore urged government leaders to "recognize that at a time of deep distrust of government in our country, rhetoric should be carefully worded and explained."

Both Moore and R. Albert Mohler Jr., president of Southern Baptist Theological Seminary in Louisville, have said the government has proper authority to enact broadly applied limits on public gatherings.

"If, however, policies target or single out churches and religious groups, this becomes an entirely different issue – it is an issue of an unconstitutional violation of religious liberty," Mohler wrote April 13.

Fischer announced April 10 that Louisville police would record the license plate numbers of cars in church parking lots but said he had not ordered law enforcement to take action against congregations hosting "drive-in" services, according to The Louisville Courier-Journal.

In his April 11 opinion in a suit filed by On Fire Christian Church, federal judge Justin Walker said Fischer had "criminalized the communal celebration of Easter."

The mayor's action "is, 'beyond all reason,' unconstitutional," Walker wrote. "In this case, Louisville is violating the Free Exercise Clause 'beyond all question.'"

The Free Exercise Clause of the U.S. Constitution prohibits the government from barring the "free exercise" of religion.

State Attorney General Daniel Cameron, however, said in written comments April 10 he sees "no problem with these drive-in services occurring" as long as churches are abiding by social-distancing recommendations from the federal Centers for Disease Control and Prevention.

"Religious organizations should not be treated any differently than other entities that are simultaneously conducting drive-through operations, while also abiding by social distancing policies," he said.

Maryville Baptist Church, an independent Baptist congregation in Louisville, held an in-person service in its building on Easter. Kentucky State Police placed notices on the windshields of 33 cars in the parking lot and recorded license plate numbers, according to The Courier-Journal. The police said the church was the only one that did not follow guidelines, the newspaper reported.

Police officers issued fines of $500 per person to those who sat in their cars during Temple Baptist Church's April 8 evening service, according to Alliance Defending Freedom (ADF), which is representing the congregation. ADF reported that those attending remained in their cars with the windows rolled up while listening on a low-power FM radio frequency as Arthur Scott preached from inside the empty building.

A large majority of states have instituted stay-at-home orders during the pandemic, and many of those have included churches and other religious groups in the directives. New Mexico Gov. Michelle Lujan Grisham announced April 11 her state no longer will exempt houses of worship from the order that prohibits mass gatherings. According to the New Mexico release, stay-at-home orders are in effect in 39 states, and only 11 have exemptions for religious gatherings, mostly with social-distancing requirements.

Looking ahead, Mohler said Americans need to realize "our constitutional liberties are at stake and the precedents set during this health crisis will have far reaching implications in the decades to come."

Moore encouraged churches to "continue to obey every lawful order and to go the extra mile to protect our neighbors from disease. And, elected officials, make sure that every communication and action is for the purpose of clarity and health, with the temperature as cool as possible while also as grave as the situation requires."