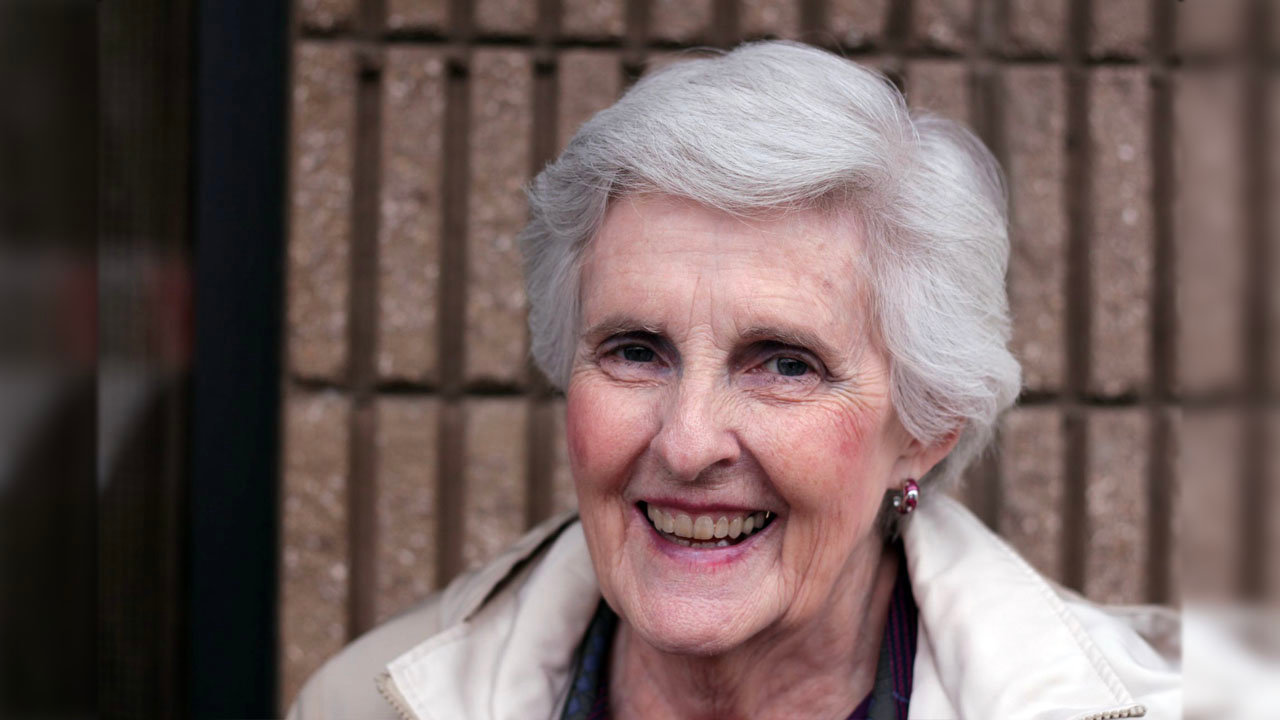 Gladys "Glad" Martin served alongside her husband, Jack, in Thailand as missionaries for more than 30 years through the Foreign (now International) Mission Board. BP/Special
Posted Tuesday, May 12, 2020 2:17 pm
Baptist Press

Gladys "Glad" Martin served alongside her husband, Jack, in Thailand as missionaries for more than 30 years through the Foreign (now International) Mission Board. BP/Special

RICHMOND, Va. (BP) — Retired Southern Baptist missionary Gladys ("Glad") Martin, a farmer's daughter from Louisiana bayou country who helped lead thousands of prison inmates and students to Christ during more than 30 years in Thailand, died May 8 following a stroke. She was 81.

Alongside Jack Martin, her husband and missionary partner, she pioneered ministry to Thai prisoners, perhaps the most hated and rejected members of society in the overwhelmingly Buddhist nation. The Martins' determination to give inmates hope – and the message of a God of second chances – eventually won the respect and cooperation of national prison authorities and the admiration of Thailand's royal family.

Jack, an outgoing visionary and passionate soul winner, was the face of the prison ministry and the bustling Baptist Student Center in Bangkok, which trains more than 10,000 Thai professionals and college students each year in English and the Gospel. But as he cheerfully acknowledged in later years, the better-organized Glad often was the brains. They made an ideal team.

First date led to a lifetime of service together

"Dad gets a lot of the credit for what Mom actually did," recalled their youngest son, Craig, who watched them in action before going on to his own media ministry career with the International Mission Board. "She did a lot of the grunt work and actually served for a time as the  director when Dad branched off into prison ministry."

The former Gladys Ola Way was born in 1938 in Port Barre, La., into a family struggling to survive the Depression. Her parents tended a small farm until she was 5 before moving into Port Barre when her father began working on oil rigs in the area. They attended church faithfully, and at age 9, she embraced Jesus Christ as her Savior. Characteristically, she brought someone with her.

"That was the happiest day of my life," Martin later wrote. "I made my decision public that night at the end of the  service, and my closest girlfriend told her mother that she needed Christ too and wanted to follow my example."

At age 14, while attending a Baptist camp, Martin realized God was calling her to the mission field. Her parents scraped together the money to send her to Acadia Baptist Academy in Eunice, La., and then to Louisiana College in Pineville. There she met Jack Martin, a handsome young preacher-to-be from St. Louis. They discovered on their first date that they both felt called by God to missions, and they married the following summer.

Early struggles, including with depression, on the mission field

Jack served as pastor of four Louisiana churches during and after his seminary studies, and the two were appointed missionaries to Thailand by the Foreign (now International) Mission Board in 1965. They already had three children when they boarded a ship for Asia the following year, with another on the way. After language study in Bangkok, they began their mission ministry in Rayong, a provincial town several hours' drive from Bangkok.

A U.S. Air Force base was located in the area (the Vietnam War was raging across the Thai border), and the Martins served as parent figures to young servicemen and women on leave. But Jack spent much of his time away starting churches and spreading the Gospel in remote villages.

Early on, Glad endured isolation, language struggles, few friends, and the challenge of rearing four children with Jack constantly on the road. She struggled with depression, a foe that would dog her repeatedly through the years. It isn't uncommon for missionaries, especially women, but it was uncommon to admit it in those days. Glad not only admitted it but used her experience to help others she and Jack mentored in later years.

"The Martin house was always open," retired missionary Janet Williams said. "They fed us, introduced us to the local barbershop and hair salon, loved our child, and showed us how to love with open hands and hearts. Jack took my husband, Tom, to the prisons; Glad took me to the Student Center.

"Glad's open and honest sharing about homeschooling woes and dark days of depression helped me see that one did not have to be perfect or 'have it all together' to love and minister to others. When she and Jack joyfully used their imperfect Thai language skills to minister, they encouraged me to try the same. By extending God's grace and mercy to me, she enabled me to extend that same grace and mercy to others."

Many other missionary families and Thai Christians could say the same.

Prison ministry among those who couldn’t forgive themselves

The Martins moved to Bangkok in 1970 as Jack took on leadership of the Baptist Student Center. Later they spent 10 years in the rowdy resort city of Pattaya, starting churches and doing street evangelism before returning to Bangkok and the Student Center in the 1990s. But woven through most of these years is the thread of their most challenging call: Thailand's grim prisons.

In the early 1970s, an influential Thai government official befriended by the Martins asked Jack to begin working with foreign inmates, most of whom were jailed for drug possession and trafficking. Gradually, that work spread to Thai inmates.

"Glad's open and honest sharing about ... depression helped me see that one did not have to be perfect or 'have it all together' to love and minister to others."

How difficult was it to bring any hope of redemption to Thai prisoners? The inmates themselves didn't believe they deserved mercy for their wrongs, much less the rest of society. Fatalism runs deep in Buddhist Thailand. Most Thais believe their "karma" controls their destiny. Only "making merit" improves chances for a better future life. Even their families reinforce the deep sense of rejection most convicts already feel.

"That was one of the hardest things Jack and I faced when we started prison ministry," Glad observed. "There were days we'd come home and just cry when we couldn't get any Thai Christians interested in prison work. They'd say, 'These are bad people. Why do you want to have anything to do with them?'"

But the Martins didn't give up. The work gradually spread from one prison to 13. In 1976 Glad began visiting women's prisons, which became a major part of the ministry along with Bible correspondence courses for male and female inmates. Attitudes began to change. Thai Baptist churches got involved. Christian inmates transferred from one prison to another became "missionaries" in their own right, sharing hope with others.

One of many stories of grace emerged from Glad's work.

A former Thai beauty queen who murdered her unfaithful fiancée was sentenced to 50 years in prison. Filled with shame and despair, she looked for a way to kill herself. But a Christian inmate in the same women's prison in Bangkok told her about a loving God who forgives and restores. She gave her heart to Christ and became a strong witness for Him. She is still in prison, Glad later reported, but "she wears the radiance of spiritual beauty rather than the ashes of worldly fame."

"Twenty years ago, prison ministry was hard and slow," Glad wrote in 1993. "Now, there is a strong Baptist team going into several prisons. One prison has seven church groups meeting every week with 34 leaders being trained to teach their own people! Other prisons have opened up and allow the team to go in and hold services. Many have been baptized. There are still over 100 awaiting baptism in one prison."

"They were like my parents. They were my mentors and partners in the ministry."

The ministry continued to expand after the Martins retired in 2000. Now led by Jack's long-time Thai ministry partner, Soonthorn Soonthorntawarong, the Christian Prison Ministry Foundation of Thailand also operates the House of Blessing, a halfway house in Bangkok that provides lodging, education, and vocational training for former inmates and their families.

The Martins returned in 2005 to serve for two months as volunteers in the prison ministry and Student Center and were honored for their years of prison service by one of Thailand's royal princesses. They also were recognized (in 2002) by Thailand's minister of justice.

"They were like my parents," Pastor Soonthorn wrote after hearing of Glad's death. "They were my mentors and partners in the ministry. Both of them taught me how to start the prison ministry 35 years ago. I am glad they had the burden and vision for Thai prisoners, even though nobody else wanted to reach out to them in Thailand. Glad, your sweet legacy will continue in the hearts of those women. You left a fruitful and great ministry here in Thailand."

In lieu of flowers, her family asks that memorial gifts be sent to the House of Blessing in Bangkok in care of Craig Martin, 11 South Dooley Avenue, Richmond, VA 23221.

A memorial service is being planned after COVID-19 restrictions are eased. It will be held at Bon Air Baptist Church in Richmond, Va.

Erich Bridges, who wrote for the International Mission Board for 35 years, became a friend of the Martins after writing about their Thai prison work in the 1990s.