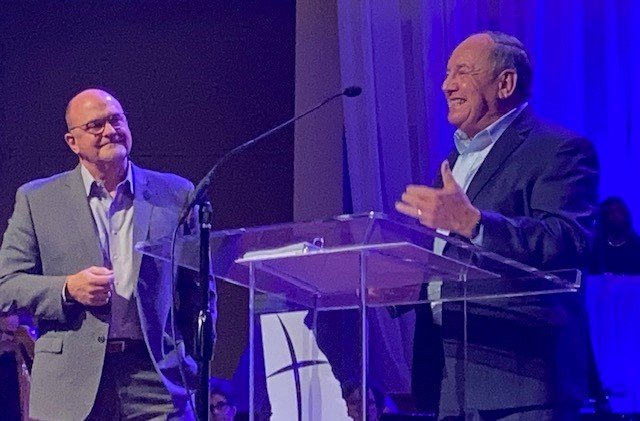 Mission Board Executive Director Thomas Hammond made that announcement Sunday evening during an inspirational rally kicking off the Georgia Baptist Convention’s two-day annual meeting in Jonesboro.

“This is an answer to prayer,” Hammond said. “The Lord provided a way for our retirees to be blessed while at the same time protecting the financial integrity of the Mission Board.”

About 170 Mission Board retirees receive the “post-retirement benefits” at an overall cost of between $700,000 and $1 million per year.

Hammond said the decision to eliminate the post-retirement benefits hadn’t been made hastily, nor was it an easy decision.

“Actually we have held many meetings over several years to figure out how to right-size our organization so we can keep the promise I made in 2019 to operate within our means,” he said. “The option to cut retiree benefits was suggested many times over the years and always rejected. Instead, we cut staff. Then we furloughed some staff. Then we cut staff salaries. We cut staff’s Guidestone matching funds and benefits. Then we went through the exercise to examine every possible way to save money.  Then we offered a voluntary retirement incentive. Then we cut more staff.  Totaling more than 80 positions cut. But after all those difficult decisions we still were not going to be operating within our means.”

Cooperative Program receipts have declined in Georgia by $11.7 million since 2007.

In March 2020, Tommy Fountain Sr, chairman of the Georgia Baptist Executive Committee, appointed members to the Budget Committee, ramped up their meeting schedule, and dug deeper into the Mission Board’s finances.

“After many hours and an opportunity to see the full financial picture, our CP Budget Committee made the decision to cut post-retirement benefits for our retirees,” Hammond said. “These are not bad people doing terrible things; they are people with great responsibility making extremely difficult decisions.”

The Budget Committee provided their findings and recommendations to members of the Administration Committee.

“They too came to the same difficult conclusion,” Hammond said. “Following our protocol, the Executive Committee was next to see the information and drew the same painful conclusion.”

The retirees were notified of the decision to cut the post-retirement benefits. They were invited to the Mission Board offices for a half-day meeting to answer to ask questions, express concerns, and to meet with Guidestone representatives.

“During this entire process our team continued asking God to give us wisdom in every decision and to clearly show us how to best help our retirees,” Hammond said. “We also prayed for God to provide a way for our retirees to have their specific needs met.”

God used the Georgia Baptist Health Care Ministry Foundation to answer those prayers. In October, a member of the foundation’s board of trustees, Raymond Moody, asked if the foundation could begin to cover the cost of the post-retirement benefits.

“Chairman Darey Kittle responded by saying he thought it would be a good idea,” Hammond said. “Other trustees felt it would be appropriate, but no official decision was made. I knew in my heart we had 15 months to work on this possibility, because I knew we were going to take care of them through 2022.”

Last week Larry Wynn met with the Executive Leadership Team of the Georgia Baptist Mission Board and brought the matter up again, and they agreed health care foundation’s generous offer was the answer to the prayers of the Mission Board’s staff and the retirees.

Wynn said covering the cost of the Mission Board retirees post-retirement benefits was well within the organization’s wheelhouse, and that’s why members of the board of trustees decided to do it.