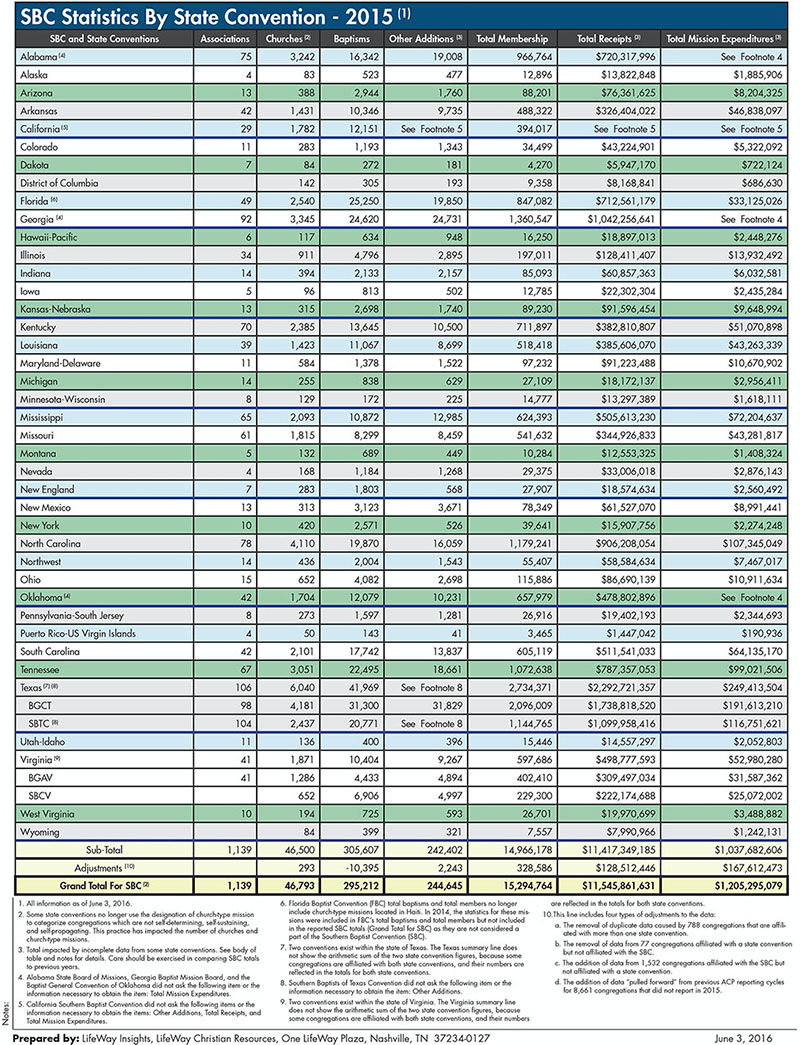 Note: A chart of SBC statistics state-by-state in 2015 is at the end of this commentary.

SPRINGDALE, AR (BP) — In a Baptist Press story on June 7, we were informed of the most recent Annual Church Profile (or ACP), where churches report their own statistics. So how are we really doing as Southern Baptists? I want to give you a few thoughts about our statistics from the compiled ACP from the churches who reported.

What did we learn about ourselves?

Statistics are our friends, but they do not always tell the entire story about who we are. Yet, what do we learn?

This is an extraordinary turnaround and we give God the glory! We do not need to minimize this but celebrate it! Churches are giving more money through our Cooperative Program and more than one-half of our state conventions are forwarding more money from the states for our national and international work together.

3. Our Lottie Moon Christmas Offering for International Missions was our largest in history.

In the 127-year history of our churches giving to the Lottie Moon Christmas Offering, this was our highest ever. Our Southern Baptist churches gave a total of $165.8 million through our Lottie Moon Christmas Offering. This is an increase from just over $153 million last year, which means Southern Baptists gave $12.8 million (or 7.6 percent) more to international missions over last year. By the way, our highest offering in history prior to this was $154 million.

Southern Baptists responded to our missionaries coming home by giving willingly, voluntarily, and sacrificially because they want people on the ground across the world and our mission force strong. This giving explosion to Lottie Moon is an encouraging response to our crisis of bringing home more than 1,000 missionaries last year.

Since this offering was just received in late March, we will have a much better sense of where we are by the end of the summer. However, to God’s glory at this point, we are 20.81 percent or $6,052,063 ahead over last year.

Our churches are stepping up with a stronger commitment to push back on lostness in North America.

So let’s be encouraged, God is at work through our churches and in our work together.

Issues we need to address

From the churches who reported through our Annual Church Profile or ACP report, we learned:

1. The membership in our churches declined.

2. The baptisms in our churches declined.

I have been talking about this evangelism crisis in our convention during my presidency, trying to move us forward through this season of challenge. I believe Southern Baptists are beginning to have this conversation. It is imperative for our future that evangelism becomes the priority of our churches and convention again.

3. The weekly worship average attendance in our churches declined.

The infrequency of church attendance on Sundays is once again being seen through our churches over this past year. Our worship attendance went from 5,674,469 people to 5,577,088 people in 2015. This is not surprising and reinforces that pastors and leaders need to call our people back to the priority of Sunday in their lives rather than willingly accept and accommodate the growing carnal perspective of the Lord’s Day as a day for self rather than a day for God.

4. The average attendance of Sunday School, Bible Study, or Small Groups in our churches declined.

The attendance of our Southern Baptist people in Sunday School, Bible Study, or small groups declined from 3,723,679 people to 3,605,303 people. This is not surprising due to the growing infrequence of church attendance on Sundays.

A perspective that may surprise you

We had 8,661 churches not reporting their 2015 ACP. Per the compiled reports since 2012, we see this reality cannot be ignored in our evaluation:

Why does this occur? There are many opinions on this topic, and I have heard this conversation since I was chairman of the Great Commission Task Force in 2009-2010. While adjustments have been made through the years, we have large to small membership churches who, for various reasons, decline to complete the ACP. These reasons need to be addressed when possible.

Therefore, from my perspective, we need to be very careful in making comparisons because any comparison is not from all of our churches. Yet, the facts are the facts. And since we have, in recent years, had thousands of non-reporting churches, to some degree there is room for comparison.

Yes, the typical response is concern for this report and unquestionably, it reveals some issues we are facing. Undeniably, we need to address these issues urgently, intentionally and aggressively. While I do not want to minimize our issues, I do want to bring perspective. Let me use our baptisms report as one example: Since 8,661 churches did not report their ACP, this means the 38,132 churches who did report baptized 295,212 people, or an average of 7.74 people per church.

Let’s just imagine the non-reporting churches averaged baptizing only 4 people per church and this figure becomes 34,644 people. Either way you look at it, our baptisms may be up from the previous year. Yet, as long as we have this many non-reporting churches, it is hard to know where we really are.

So what does all this mean? Be careful in your assessments, evaluations, and statements. Yet, let’s be honest with ourselves; these trends are unhealthy and undeniable, demanding immediate action.

In reality, the most real data we have is relating to finances, which is reported by our own Executive Committee monthly and annually. Why? Because churches must forward the money they receive for the Cooperative Program and mission offerings. But these same churches volunteer to complete the ACP or choose not to complete the ACP.

I say this to remind us that our financial giving, which still needs to grow greatly, is showing greater signs of health for our churches in their giving through the Cooperative Program and mission offerings. Please keep this in mind when talking about the ACP of our reporting churches.

The key question and our great need

The key question for Southern Baptists is: Are we pushing back on lostness in America? I think we know the answer is no. We are losing our nation spiritually. It comes back to my theme for the last two to three years: The greatest need in America is the next Great Spiritual Awakening. Anyone who denies this needs to adjust their spiritual glasses concerning the spiritual condition of our nation and the need in this hour.

May God help our churches and convention recapture the passion for evangelism, return to God in repentance seeking Jesus with greater intensity for spiritual revival, and remind ourselves even in this uncertain, volatile U.S. presidential election cycle, America must have the next Great Spiritual Awakening. 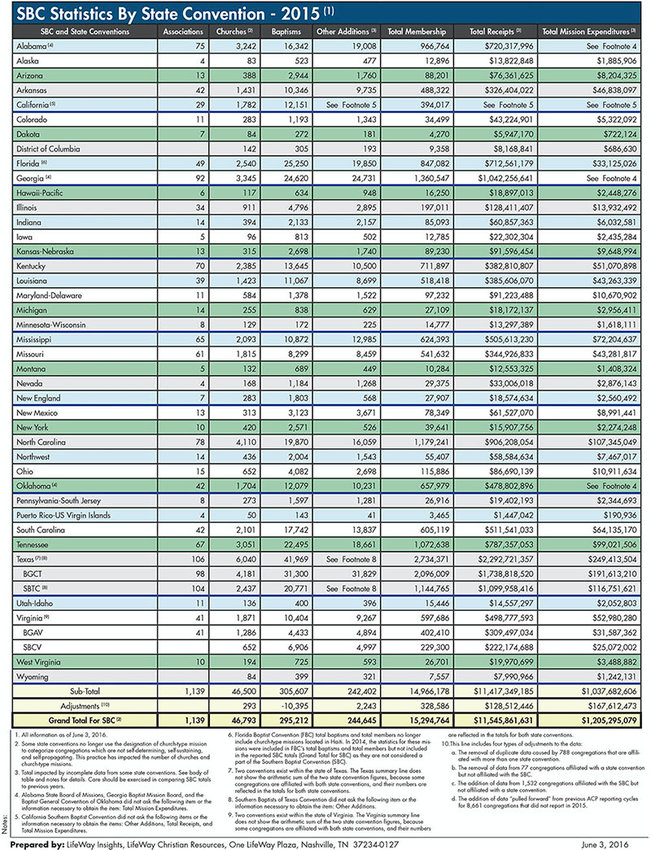