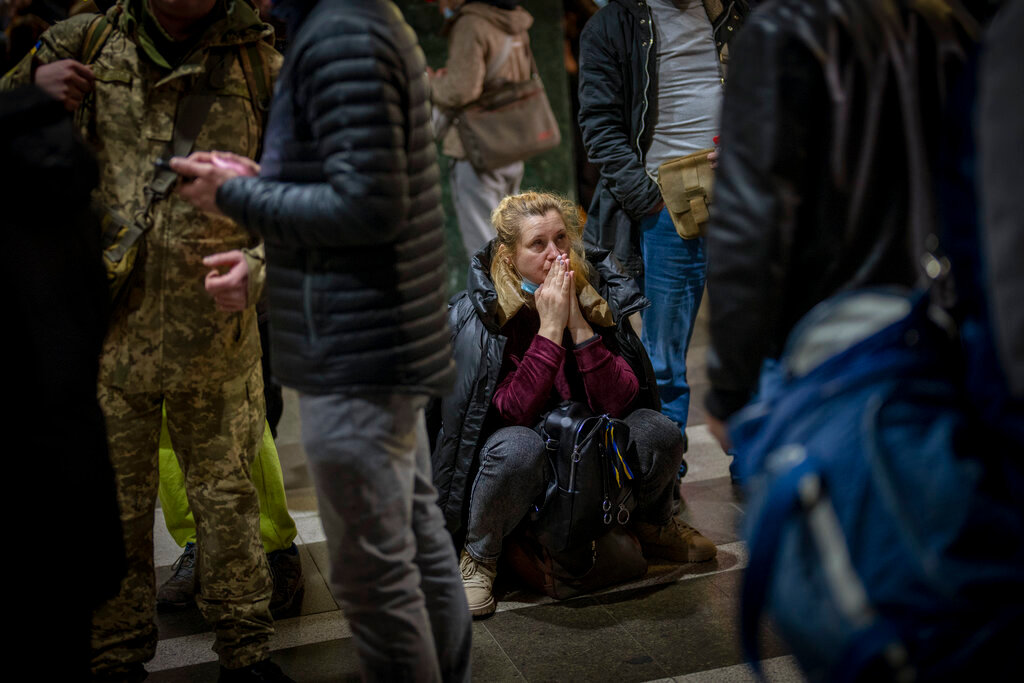 A woman reacts as she waits for a train trying to leave Kyiv, Ukraine, Thursday, Feb. 24, 2022. Russian troops have launched their anticipated attack on Ukraine. Big explosions were heard before dawn in Kyiv, Kharkiv and Odesa as world leaders decried the start of an Russian invasion that could cause massive casualties and topple Ukraine's democratically elected government. (AP Photo/Emilio Morenatti)
Emilio Morenatti 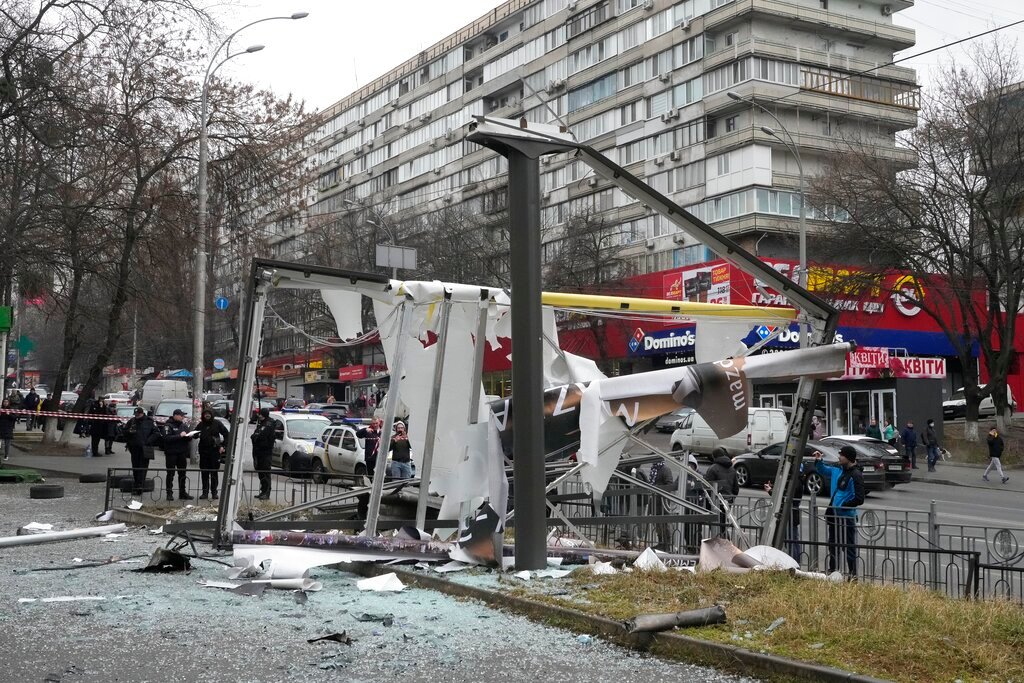 Police investigate the consequences of Russian shelling in Kyiv, Ukraine, Thursday, Feb. 24, 2022. Russian troops have launched their anticipated attack on Ukraine. Big explosions were heard before dawn in Kyiv, Kharkiv and Odesa as world leaders decried the start of an Russian invasion that could cause massive casualties and topple Ukraine's democratically elected government. (AP Photo/Efrem Lukatsky)
Efrem Lukatsky 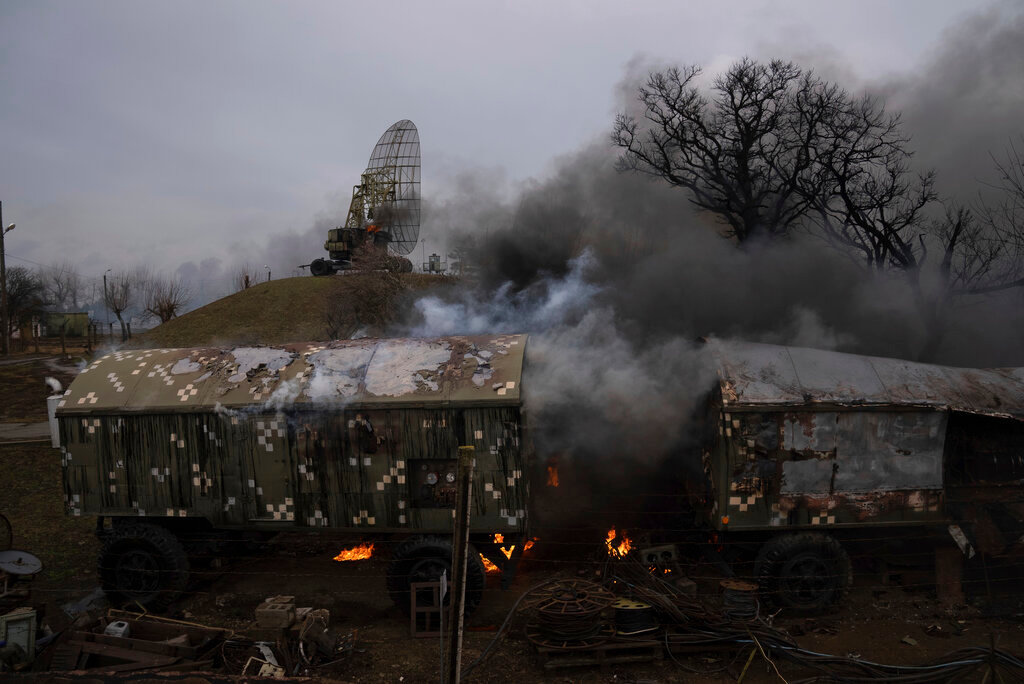 Smoke rise from an air defence base in the aftermath of an apparent Russian strike in Mariupol, Ukraine, Thursday, Feb. 24, 2022. Russian troops have launched their anticipated attack on Ukraine. Big explosions were heard before dawn in Kyiv, Kharkiv and Odesa as world leaders decried the start of Russian invasion that could cause massive casualties and topple Ukraine's democratically elected government. (AP Photo/Evgeniy Maloletka)
Evgeniy Maloletka
Previous Next
Posted Thursday, February 24, 2022 8:37 am
By YURAS KARMANAU, JIM HEINTZ, VLADIMIR ISACHENKOV and DASHA LITVINOVA, Associated Press

KYIV, Ukraine (AP) — Russia launched a wide-ranging attack on Ukraine on Thursday, hitting cities and bases with airstrikes or shelling, as civilians piled into trains and cars to flee. Ukraine's government said Russian tanks and troops rolled across the border in a “full-scale war” that could rewrite the geopolitical order and whose fallout already reverberated around the world.

In unleashing Moscow's most aggressive action since the Soviet invasion of Afghanistan in 1979, President Vladimir Putin deflected global condemnation and cascading new sanctions — and chillingly referred to his country’s nuclear arsenal. He threatened any foreign country attempting to interfere with “consequences you have never seen.”

Sirens rang out in Ukraine’s capital, large explosions were heard there and in other cities, and people massed in train stations and took to roads, as the government said the former Soviet republic was seeing a long-anticipated invasion from the east, north and south. It reported more than 40 soldiers had been killed and dozens wounded so far.

The chief of the NATO alliance said the “brutal act of war” shattered peace in Europe, joining a chorus of world leaders who decried the attack, which could cause massive casualties, topple Ukraine’s democratically elected government and upend the post-Cold War security order. The conflict was already shaking global financial markets: Stocks plunged and oil prices soared amid concerns that heating bills and food prices would skyrocket.

“As of today, our countries are on different sides of world history," Zelenskyy tweeted. "Russia has embarked on a path of evil, but Ukraine is defending itself and won’t give up its freedom.”

His adviser Mykhailo Podolyak said: “A full-scale war in Europe has begun. ... Russia is not only attacking Ukraine, but the rules of normal life in the modern world.”

The attack targeted a country the size of Texas that has increasingly tilted toward the democratic West and away from Moscow's sway. The autocratic Putin made clear earlier this week that he sees no reason for Ukraine to exist, raising fears of possible broader conflict in the vast space that the Soviet Union once ruled. Putin denied plans to occupy Ukraine, but his ultimate goals remain hazy.

Ukrainians who had long braced for the prospect of an assault were urged to stay home and not to panic despite the dire warnings.

With social media amplifying a torrent of military claims and counter-claims, it was difficult to determine exactly what was happening on the ground.

Associated Press reporters saw or confirmed explosions in the capital, in Mariupol on the Azov Sea, and Kharkiv in the east. AP confirmed video showing Russian military vehicles crossing into Ukrainian-held territory in the north from Belarus and from Russian-annexed Crimea in the south.

“We are facing a war and horror. What could be worse?” 64-year-old Liudmila Gireyeva said in Kyiv. She planned to flee the city and try to eventually get to Poland to join her daughter. Putin “will be damned by history, and Ukrainians are damning him.”

Governments from the U.S. to Asia and Europe readied new sanctions after weeks of failed efforts for a diplomatic solution. But global powers have said they will not intervene militarily to defend Ukraine, though NATO mobilized more troops to move toward eastern Europe.

Alliance member Lithuania, which borders Russian ally Belarus and a Russian exclave, declared a state of emergency, and the president of Moldova pushed to do the same.

“We woke up in a different world today,” Germany’s foreign minister said.

After weeks of denying plans to invade, Putin justified his actions in an overnight televised address, asserting that the attack was needed to protect civilians in eastern Ukraine — a false claim the U.S. had predicted he would make as a pretext for an invasion. He accused the U.S. and its allies of ignoring Russia’s demands to prevent Ukraine from joining NATO and for security guarantees.

The Russian military claimed to have wiped out Ukraine’s entire air defenses in a matter of hours, and European authorities declared the country's air space an active conflict zone. Russia's claims could not immediately be verified, nor could Ukrainian ones that they had shot down several Russian aircraft. The Ukrainian air defense system and air force date back to the Soviet era and are dwarfed by Russia’s massive air power and precision weapons.

U.S. President Joe Biden pledged new sanctions to punish Russia for the “unprovoked and unjustified attack.” The president said he planned to speak to Americans on Thursday after a meeting of the Group of Seven leaders. More sanctions against Russia were expected to be announced.

Zelenskyy urged global leaders to provide defense assistance to Ukraine and help protect its airspace, and urged his compatriots to defend the nation. Ukraine’s Foreign Minister Dmytro Kuleba pleaded: "The world can and must stop Putin. The time to act is now.”

In the capital, Mayor Vitaly Klitschko advised residents to stay home unless they are involved in critical work and urged them to prepare go-bags with necessities and documents if they need to evacuate.

The Russian Defense Ministry said it was not targeting cities, but using precision weapons and claimed that “there is no threat to civilian population.”

The consequences of the conflict and resulting sanctions on Russia started reverberating throughout the world.

World stock markets plunged and oil prices surged by nearly $8 per barrel. Market benchmarks tumbled in Europe and Asia and U.S. stocks pointed toward a sharply lower open. Brent crude oil jumped to over $100 per barrel Thursday on unease about possible disruption of Russian supplies. The ruble sank.

Anticipating international condemnation and countermeasures, Putin issued a stark warning to other countries not to meddle.

In a reminder of Russia’s nuclear power, Putin warned that “no one should have any doubts that a direct attack on our country will lead to the destruction and horrible consequences for any potential aggressor.”

Putin’s announcement came just hours after the Ukrainian president rejected Moscow’s claims that his country poses a threat to Russia and made a passionate, last-minute plea for peace.

“The people of Ukraine and the government of Ukraine want peace,” Zelenskyy said in an emotional overnight address, speaking in Russian in a direct appeal to Russian citizens.

Zelenskyy said he asked to arrange a call with Putin late Wednesday, but the Kremlin did not respond.

The attack began even as the U.N. Security Council was meeting to hold off an invasion. Members still unaware of Putin’s announcement of the operation appealed to him to stand down. U.N. Secretary-General Antonio Guterres opened the emergency meeting, telling Putin: “Give peace a chance.”

“In these dark hours, our thoughts are with Ukraine and the innocent women, men and children as they face this unprovoked attack and fear for their lives,” they said on Twitter.