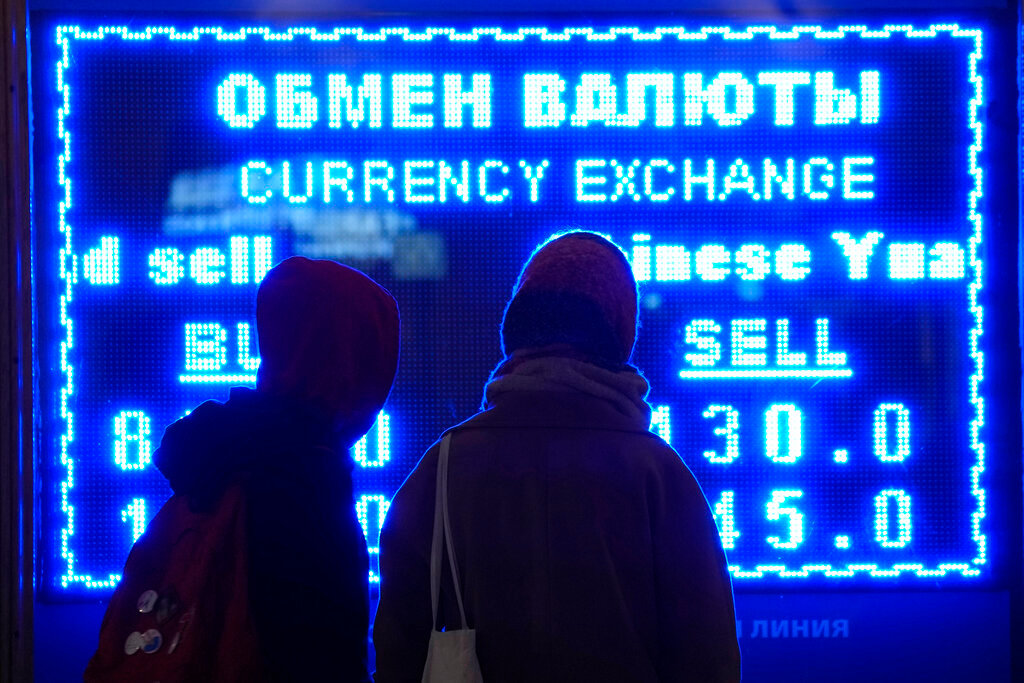 Western sanctions are dealing a severe blow to Russia's economy. The ruble is plunging, foreign businesses are fleeing and sharply higher prices are in the offing. Familiar products may disappear from stores, and middle-class achievements like foreign vacations are in doubt.

Beyond the short-term pain, Russia's economy will likely see a deepening of the stagnation that started to set in long before the invasion of Ukraine.

But a total collapse is unlikely, several economists say. Despite the punishing financial sanctions, Russia has built “an economy that’s geared for conflict," said Richard Connolly, an expert on the Russian economy at the Royal United Services Institute in Britain.

The Russian government’s extensive involvement in the economy and the money it is still making from oil and gas exports — even with bans from the U.S. and Britain — will help soften the blow for many workers, pensioners and government employees in a country that has endured three serious financial crises in the past three decades. And as economists point out, Iran, a much smaller and less diversified economy, has endured sanctions misery for years over its nuclear program without a complete breakdown.

Still, the Russian currency has fallen spectacularly, which will drive up prices for imported goods when inflation was already running hot at 9%. It took 80 rubles to get one U.S. dollar on Feb. 23, the day before the invasion. By Thursday, it was 119 — even after Russia's central bank took drastic measures to stop the plunge, including doubling interest rates to 20%.

Marina Albee, owner of the Cafe Botanika vegetarian restaurant in St. Petersburg's historic city center, has already heard from her fruit and vegetable supplier that prices will be going up 10% to 50%. Other suppliers can't say how much.

“We're waiting for the tsunami to hit — the tsunami being the price increases for everything we purchase,” Albee said. "We need to keep our eye on the situation and, if we need to, take those dishes out of the menu."

“We can reengineer our menu to make more Russian-based dishes," she said. “You have to be quick on your feet.” After surviving two years without tourists because of the COVID-19 pandemic, “it takes a lot to faze us,” Albee added.

Although sanctions have frozen a large portion of Russia’s foreign currency reserves, state finances are in good shape with low debt. When the government does need to borrow, its creditors are mostly domestic banks, not foreign investors who could abandon it in a crisis. The government announced support this week for large companies deemed crucial to the economy.

Estimates of the short-term impact on Russia's economic growth vary widely because more sanctions could come and the fallout from President Vladimir Putin's war are uncertain.

“Russians will be a lot poorer — they won’t have cash to holiday in Turkey or send their kids to school in the West — and even then, because of Putin, they will not be welcome,” said Tim Ash, senior emerging market sovereign analyst at BlueBay Asset Management.

He sees economic growth dropping 10%, while other economists see a drop of as little as 2% or something in between.

Long-term prospects for a growing economy are not good — for enduring reasons that predate the war: A few favored insiders control major companies and sectors, resulting in a lack of competition and new investment. Russia has failed to diversify away from its dominant oil and gas sector. Per capita income in 2020 was roughly what it was in 2014.

Foreign investment built up over the 30 years since the collapse of the Soviet Union and the jobs it brought are heading for the door. Big corporations like Volkswagen, Ikea and Apple have idled plants or halted sales, while energy giants BP, Exxon and Shell have said they will stop buying Russian oil and gas or exit partnerships there.

On Wednesday, ratings agency Fitch cut its credit rating for the country further into junk status and warned of an imminent default on sovereign debt.

The central bank has stepped in to bolster the ruble and the banking system, restrict withdrawals in foreign currency and keep the stock market closed for nearly two weeks. The government also has announced measures to restrict foreign investors from fleeing. While such restrictions shore up the financial system against utter collapse, they also close off the economy to trade and investment that could fuel growth.

Since facing sanctions over its 2014 seizure of Ukraine's Crimea peninsula, the Kremlin has anticipated such measures would be the West's primary weapon in any conflict. In response, it has devised what Connolly, an associate fellow at the Royal United Services Institute and author of a book on Russia’s response to sanctions, calls “the Kalashnikov economy,” a reference to the Russian military rifle.

It's “a durable, in some ways primitive system," he said, based on low debt, government control of most of the banking system and a central bank able to intervene and prop up the currency and banks.

While trade will fall and fewer goods will be available, the weaker ruble means the Russian government will earn more of its currency for the oil it sells because oil is priced in dollars. With recently higher prices, Connolly estimates Russia is getting 2.7 times the amount of rubles from oil compared with 2019, money that can cover salaries and pensions.

While U.S. and British officials said they will ban the relatively small amount of oil they import from Russia, Europe, which is much more dependent on Russian energy, has held back.

As it stands, “there's a lot of holes in this, and the Russians will exploit this and develop a way of carrying on," Connolly said.

“I’m not saying they’re going to have a wonderful time. I’m saying they have the resources to deal with these problems,” he said.

“That may not translate into open dissension, let alone revolt, but it will hardly bolster support for the autocrat,” he said.