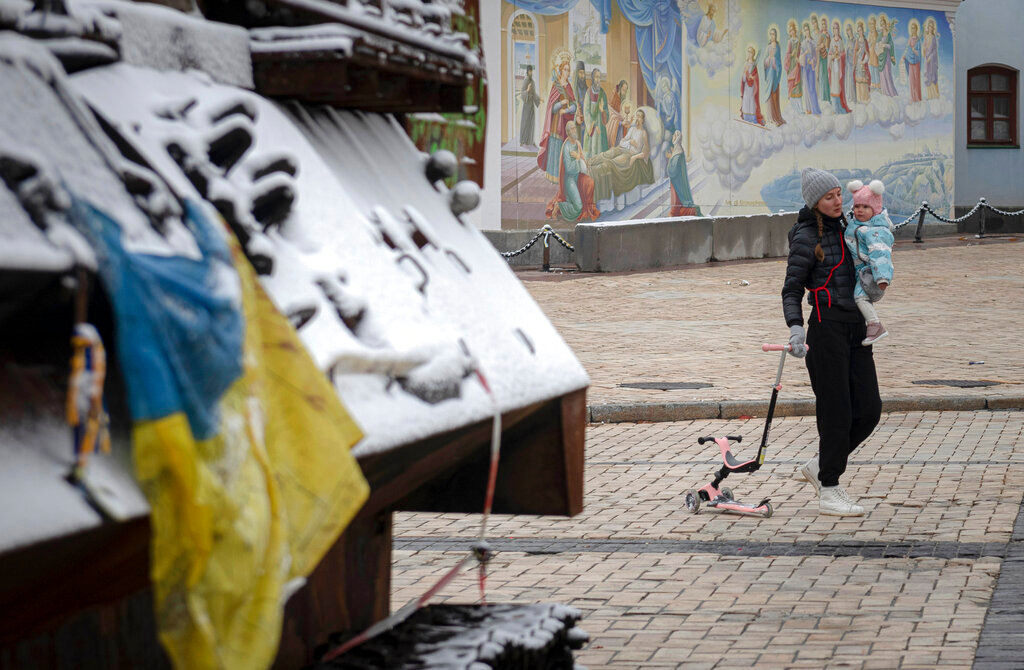 A woman walks past a display of destroyed Russian tanks and armoured vehicles after a snowfall in downtown Kyiv, Ukraine, Thursday, Nov. 17, 2022. (AP Photo/Andrew Kravchenko) 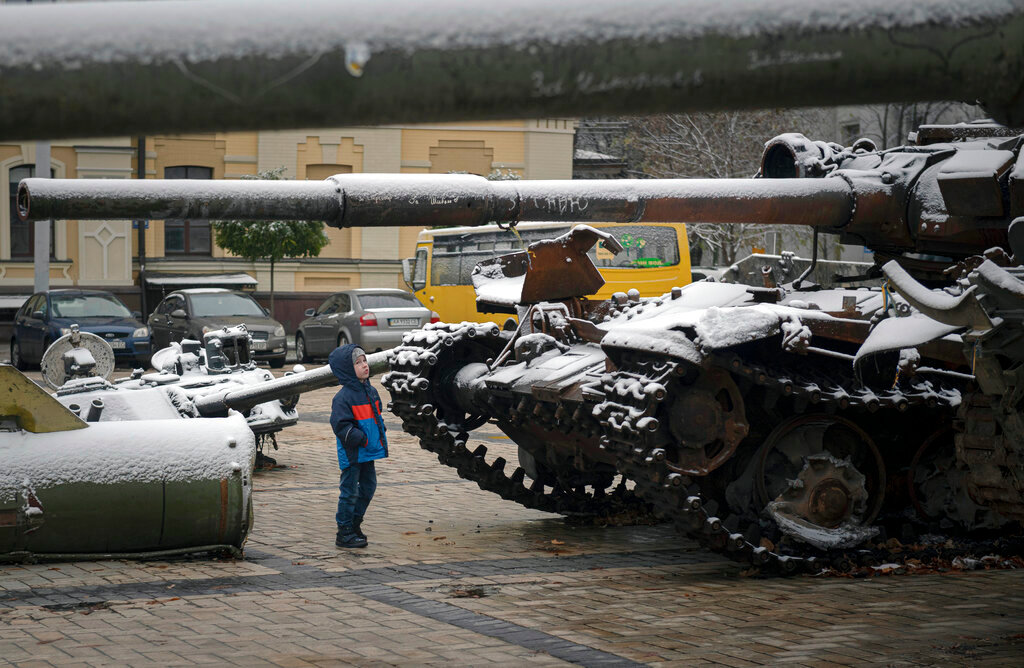 KYIV, Ukraine (AP) — Russian airstrikes targeted Ukraine’s energy facilities again Thursday as the first snow of the season fell in Kyiv, a harbinger of the hardship to come if Moscow’s missiles continue to take out power and gas plants as winter descends.

Separately, the United Nations announced the extension of a deal to ensure exports of grain and fertilizers from Ukraine that were disrupted by the war. The deal was set to expire soon, renewing fears of a global food crisis if exports were blocked from one of the world's largest grain producers.

Even as all sides agreed to extend the deal, air raid sirens sounded across Ukraine on Thursday. At least four people were killed and more than two dozen others wounded in the drone and missile strikes, including one that hit a residential building, authorities said.

The Kremlin’s forces have suffered a series of setbacks on the ground, the latest being the loss of the southern city of Kherson. In the face of those defeats, Russia has increasingly resorted to aerial onslaughts aimed at energy infrastructure and other civilian targets in parts of Ukraine it doesn’t hold.

Thursday's salvo appeared to be on a lesser scale than the nationwide barrage of more than 100 missiles and drones that knocked out power to 10 million people earlier this week. Tuesday's strikes were described by Ukraine’s energy minister as the biggest barrage yet of the nearly 9-month-old invasion against the battered power grid.

It also resulted in a missile landing in Poland, killing two people. Authorities are still trying to ascertain where that missile came from, with early indications pointing to a Ukrainian air defense system meant to counter the Russian bombardment.

The renewed bombings come as many Ukrainians are coping with the discomforts of regular blackouts and heating outages, as winter approaches. A light snow dusted the capital Thursday, where the temperature fell below freezing.

Russian strikes also hit the central city of Dnipro and Ukraine’s southern Odesa region for the first time in weeks. And critical infrastructure was also hit in the northeastern region of Kharkiv, in the area of Izyum, wounding three workers, the regional administration said.

The head of Ukraine’s presidential office, Andriy Yermak, called the strikes on energy targets the “naive tactics of cowardly losers” in a Telegram post on Thursday.

“Ukraine has already withstood extremely difficult strikes by the enemy, which did not lead to results the Russian cowards hoped for,” Yermak wrote.

Ukrainian President Volodymyr Zelenskyy posted on Telegram a video that he said was one of the blasts in Dnipro. The footage from a vehicle dashcam showed a fiery blast engulfing a rainy road.

“This is another confirmation from Dnipro of how terrorists want peace,” Zelenskyy wrote, referring to the Kremlin's forces. “The peaceful city and people’s wish to live their accustomed lives. Going to work, to their affairs. A rocket attack!”

Valentyn Reznichenko, governor of the Dnipropetrovsk region, said a large fire erupted in Dnipro after the strikes on the city hit an industrial target. The attack wounded at least 23 people, Reznichenko said.

In the Odesa region, an infrastructure target was hit, Gov. Maksym Marchenko said on Telegram, warning about the threat of a “massive missile barrage on the entire territory of Ukraine.”

Elsewhere, a Russian strike that hit a residential building killed at least four people overnight in Vilnia in the southern region of Zaporizhzhia. Rescuers combed the rubble for any other victims, according to Kyrylo Tymoshenko, a senior official in the Ukrainian presidential office.