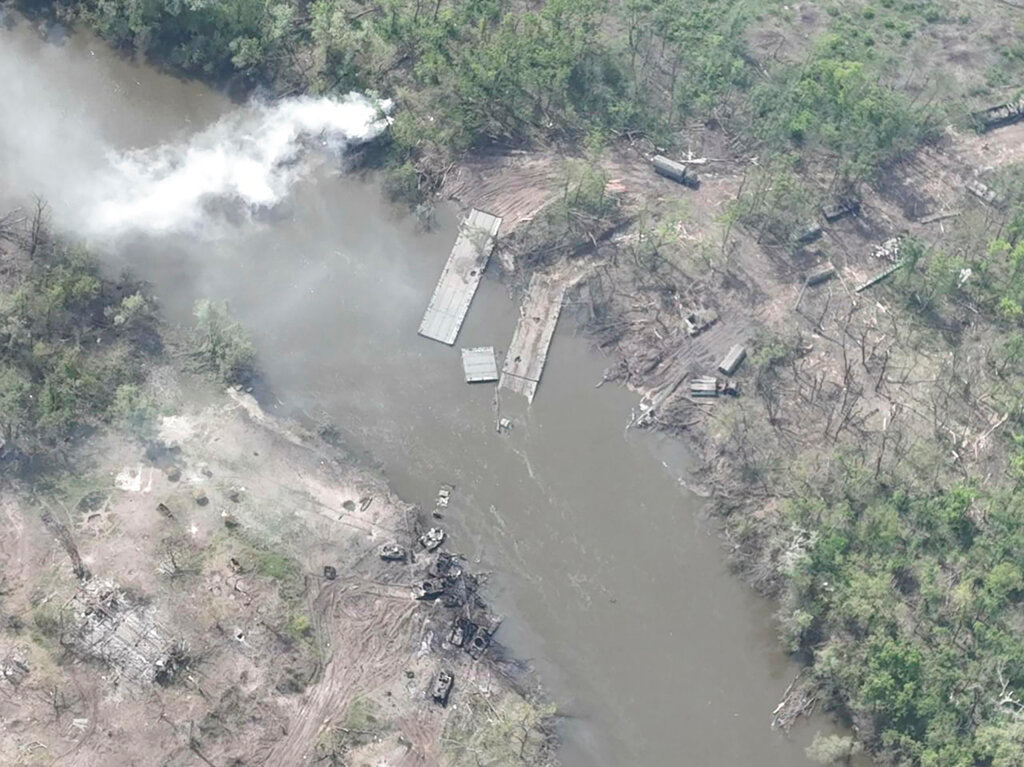 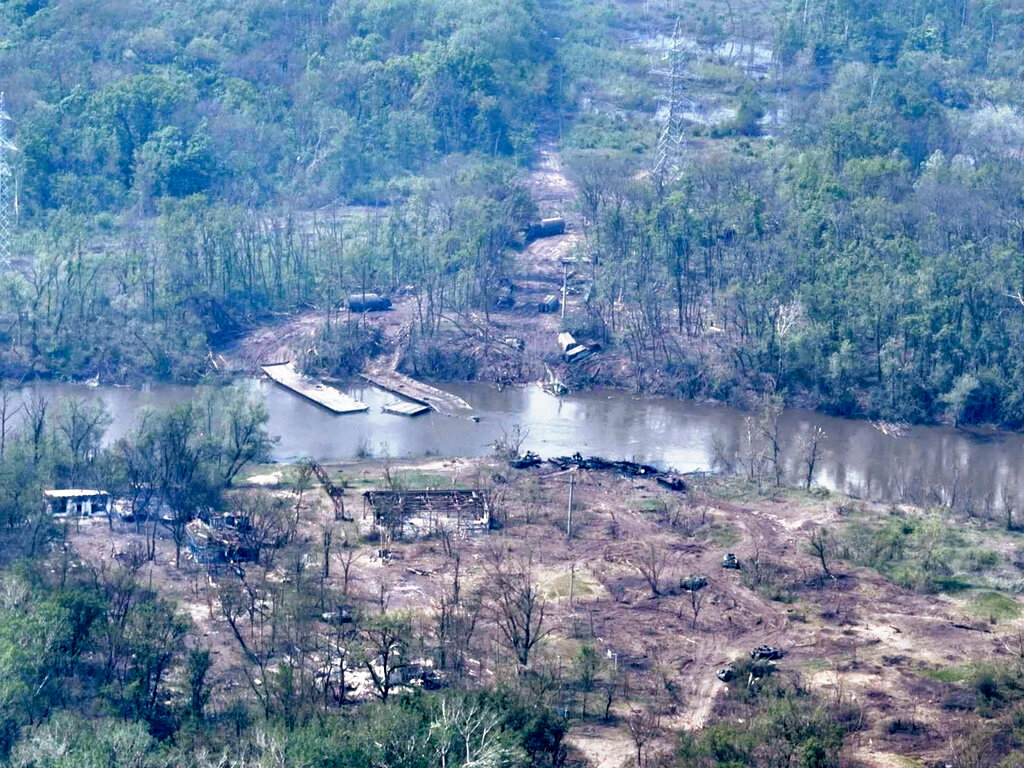 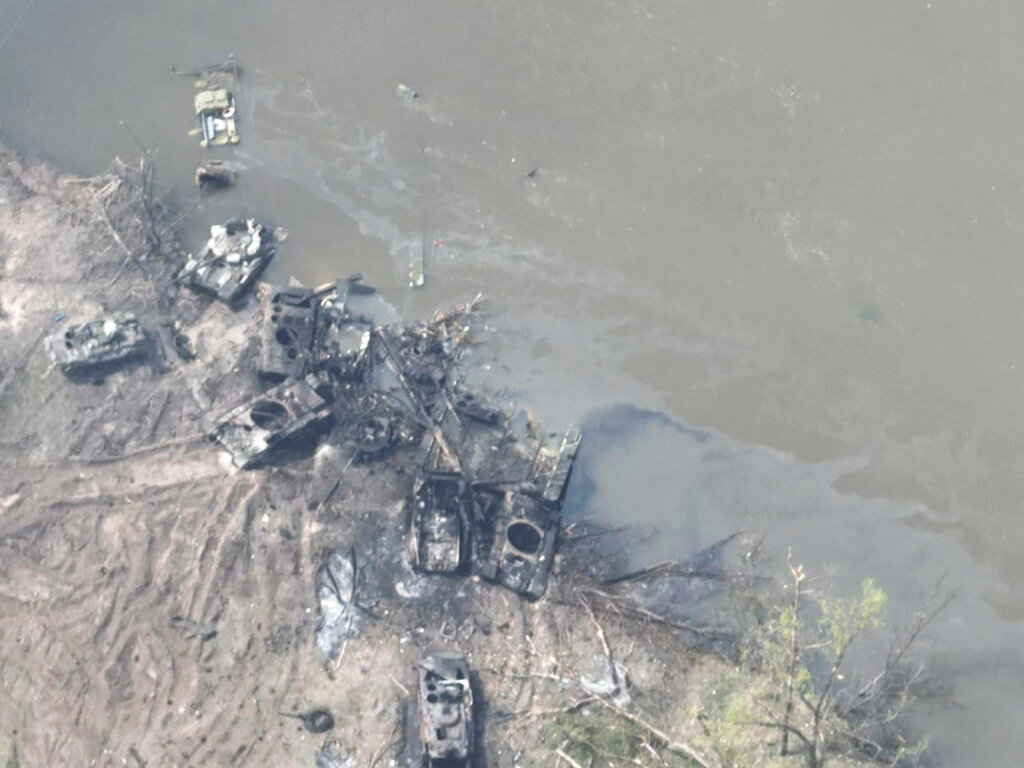 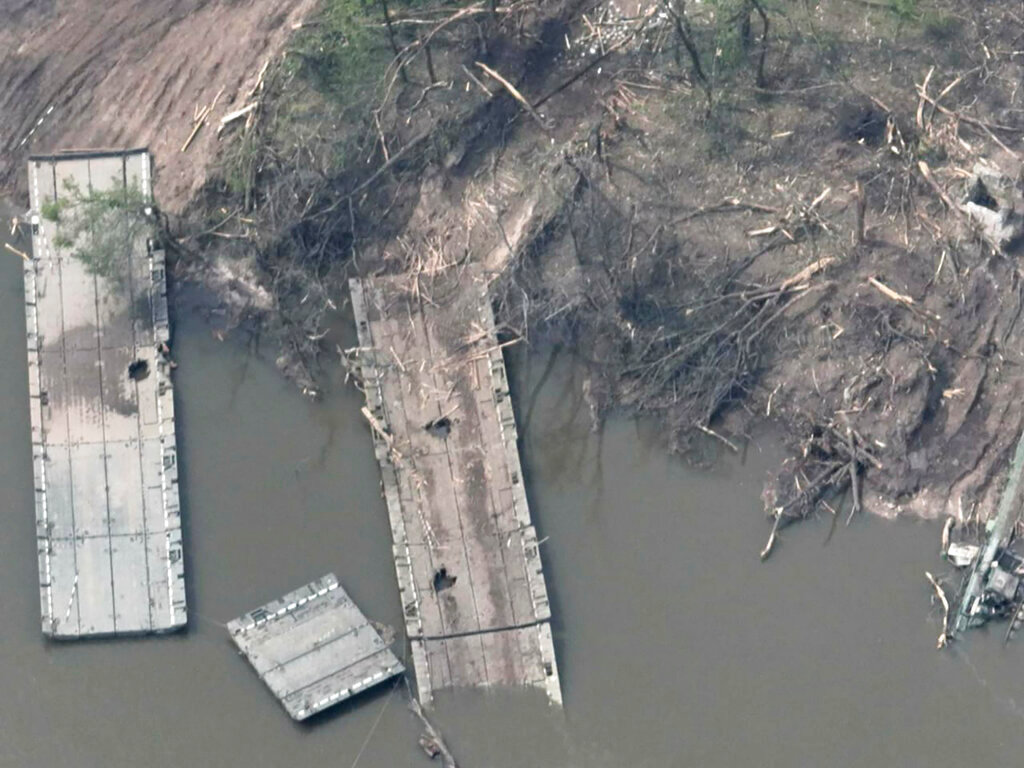 A photo provided by the Ukraine Armed Forces on Thursday, May 12, 2022, a ruined pontoon crossing with dozens of destroyed or damaged Russian armored vehicles on both banks of Siverskyi Donets River in eastern Ukraine. Ukrainian and British officials say Russia suffered heavy losses when Ukrainian forces destroyed the pontoon bridge enemy troops were using to try to cross the river. (Ukrainian Presidential Press Office via AP)
Previous Next
Posted Friday, May 13, 2022 2:17 pm
By OLEKSANDR STASHEVSKYI and DAVID KEYTON, Associated Press

KYIV, Ukraine (AP) — Russia suffered heavy losses when Ukrainian forces destroyed the pontoon bridge enemy troops were using to try to cross a river in the east, Ukrainian and British officials said in another sign of Moscow's struggle to salvage a war gone awry.

Ukrainian authorities, meanwhile, opened the first war crimes trial of the conflict. The defendant, a captured Russian soldier, stands accused of shooting to death a 62-year-old civilian in the early days of the war.

The trial got underway as Russia’s offensive in the Donbas, Ukraine’s eastern industrial heartland, seemed to turn increasingly into a grinding war of attrition.

Ukraine’s airborne command released photos and video of what it said was a damaged Russian pontoon bridge over the Siversky Donets River and several destroyed or damaged Russian military vehicles nearby.

Ukrainian news reports said troops thwarted an attempt by Russian forces to cross the river earlier this week, leaving dozens of tanks and other military vehicles damaged or abandoned. The command said its troops “drowned the Russian occupiers.”

“Conducting river crossings in a contested environment is a highly risky maneuver and speaks to the pressure the Russian commanders are under to make progress in their operations in eastern Ukraine,” the ministry said in its daily intelligence update.

In other developments, a move by Finland and, potentially, Sweden to join NATO was thrown into question when Turkish President Recep Tayyip Erdogan said his country is “not of a favorable opinion” toward the idea. He accused Sweden and other Scandinavian countries of supporting Kurdish militants and others Turkey considers terrorists.

Erdogan did not say outright that he would block the two countries from joining NATO. But the military alliance makes its decisions by consensus, meaning that each of its 30 member countries has a veto over who can join.

An expansion of NATO would be a blow to Russian President Vladimir Putin, who undertook the war in what he said was a bid to thwart the alliance’s eastward advance. But the invasion of Ukraine has stirred fears in other countries along Russia’s flank that they could be next.

With Ukraine pleading for more arms to fend off the invasion, the European Union’s foreign affairs chief announced plans to give the country an additional $520 million to buy heavy weapons.

The battle for the Donbas has turned into a village-by-village slog with no major breakthroughs on either side and little ground gained.

The Ukrainian military chief for the Luhansk region of the Donbas said Friday that Russian forces opened fire 31 times on residential areas the day before, destroying dozens of homes, notably in Hirske and Popasnianska villages, and a bridge in Rubizhne.

In the south, Ukrainian officials claimed another success in the Black Sea, saying their forces took out another Russian ship, though there was no confirmation from Russia and no casualties were reported.

The Vsevolod Bobrov logistics ship was badly damaged but not thought to have sunk when it was struck while trying to deliver an anti-aircraft system to Snake Island, said Oleksiy Arestovych, a Ukrainian presidential adviser.

In April, Ukraine sank the Moskva, a guided missile cruiser that was the flagship of Russia’s Black Sea fleet. In March it destroyed a landing ship.

Justin Crump, a former British tank commander who is now a security consultant, said Moscow's losses have forced it to downsize its objectives. He said the Russians have had to use hastily patched-together units that haven't trained together and are thus less effective.

“This is not going to be quick. So we’re settled in for a summer of fighting at least. I think the Russian side is very clear that this is going to take a long time,” he said.

Ukrainian prosecutors are investigating thousands of potential war crimes. Many of the alleged atrocities came to light last month after Moscow’s forces abandoned their bid to capture Kyiv and withdrew from around the capital, exposing mass graves and streets strewn with bodies.

In the first war crime case brought to trial, Russian Sgt. Vadim Shyshimarin, 21, could get life in prison if convicted of shooting a Ukrainian man in the head through an open car window in a village in the northeastern Sumy region on Feb. 28, four days into the invasion.

In a small Kyiv courtroom, scores of journalists watched the start of the wartime proceedings, which will be closely watched by international observers to make sure the trial is fair.

The defendant, dressed in a blue and gray hoodie and gray sweatpants, sat in a small glass cage during the proceedings, which lasted about 15 minutes and will resume on Wednesday.

Shyshimarin was asked a series of questions, including whether he understood his rights and whether he wanted a jury trial. He declined the latter.

His Ukraine-assigned attorney, Victor Ovsyanikov, has acknowledged that the case against the soldier is strong and has not indicated what his defense will be.

In a video posted by the Security Service of Ukraine, Shyshimarin, a member of a tank unit that was captured by Ukrainian forces, admitted that he shot the civilian. Shyshimarin said he was ordered to do so.

As the war grinds on, teachers are trying to restore some sense of normalcy after the fighting shuttered Ukraine’s schools and upended the lives of millions of children.

In Kharkiv, Ukraine’s second-largest city, lessons are being given in a subway station that has become home for many families. Children joined their teacher Valeriy Leiko around a table to learn about history art, with youngsters’ drawings lining the walls.

“It helps to support them mentally. Because now there is a war, and many lost their homes ... some people’s parents are fighting now,” Leiko said. In part because of the lessons, he said, “they feel that someone loves them.”

The internet connection was a problem for some, she said. And “it is hard to concentrate when you have to do your homework with explosions by your window."

Yesica Fisch in Bakhmut, Yuras Karmanau in Lviv, Mstyslav Chernov in Kharkiv, Jari Tanner in Helsinki, Elena Becatoros in Odesa, and other AP staffers around the world contributed to this report.