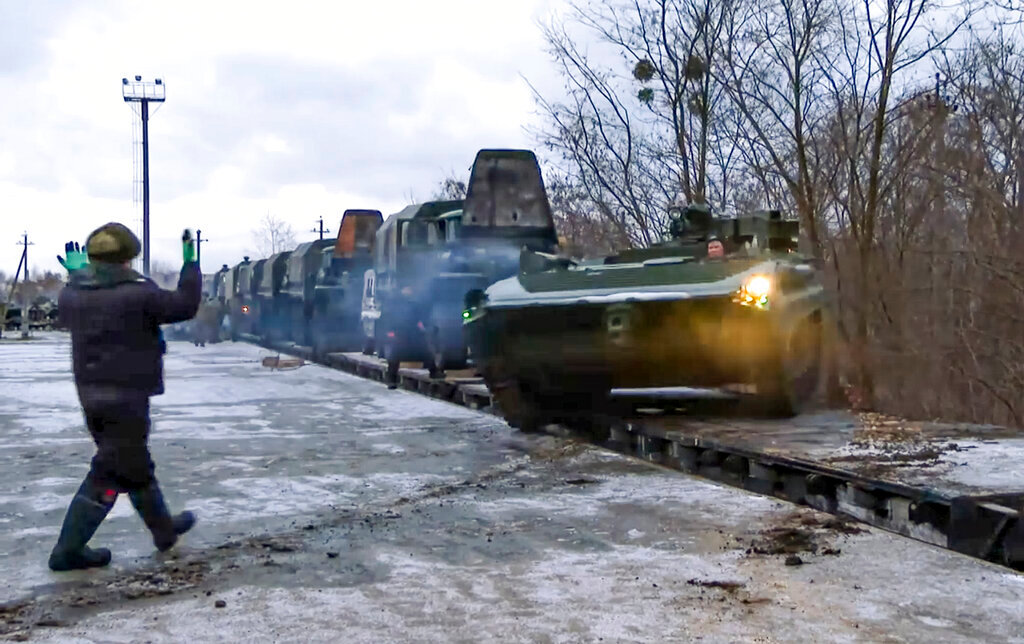 In this photo taken from video provided by the Russian Defense Ministry Press Service, A Russian armored vehicle drives off a railway platform after arrival in Belarus, Wednesday, Jan. 19, 2022. In a move that further beefs up forces near Ukraine, Russia has sent an unspecified number of troops from the country's far east to its ally Belarus, which shares a border with Ukraine, for major war games next month. (Russian Defense Ministry Press Service via AP)
Posted Wednesday, January 19, 2022 8:54 pm
From wire, staff reports

MOSCOW (AP) — Russia maintained a tough posture Wednesday amid the tensions over its troop buildup near Ukraine, with a top diplomat warning that Moscow will accept nothing less but “watertight” U.S. guarantees precluding NATO's expansion to Ukraine.

Deputy Foreign Minister Sergei Ryabkov, who led the Russian delegation at the security talks with the U.S. in Geneva last week, reaffirmed that Moscow has no intentions of invading Ukraine as the West fears, but said that receiving Western security guarantees is an imperative for Moscow.

The talks in Geneva and a related NATO-Russia meeting in Brussels last week were held as Russia has amassed an estimated 100,000 troops near Ukraine in what the West fears might herald an invasion.

Buck Burch, a former International Mission Board missionary in Russia now serving as a missions  strategist at the Georgia Baptist Mission Board, said  the tensions  should be a matter of prayer for Southern Baptists.

“The thing to remember in all of this is that the Baptist churches in Russia and Ukraine are very closely related, with family members on both sides of the border," Burch said. "That which we see unfolding in front of us has affected relationships on both sides within the evangelical family. We should pray for our brothers and sisters that they would not be divided even as the political lines are drawn.”

Amid the soaring tensions, U.S. Secretary of State Antony Blinken visited Ukraine on Wednesday to reassure it of Western support in the face of what he called “relentless” Russian aggression. In Strasbourg, French President Emmanuel Macron urged the European Union to quickly draw up a new security plan containing proposals to help ease tensions with Russia.

In a move that further beefs up forces near Ukraine, Russia has sent an unspecified number of troops from the country’s far east to its ally Belarus, which shares a border with Ukraine, for major war games next month. Ukrainian officials have said that Moscow could use Belarusian territory to launch a potential multi-pronged invasion.

The Russian Defense Ministry said Wednesday that some troops already have arrived in Belarus for the Allied Resolve 2022 drills that will run through Feb. 20. It said the exercise will be held at five firing ranges and other areas in Belarus and involve four Belarusian air bases.

German Chancellor Olaf Scholz said Wednesday it's too early to tell whether talks could defuse the crisis, adding that “after years of rising tensions, staying silent is not a sensible option.”

“The Russian side is aware of our determination,” Scholz told the World Economic Forum. “I hope they also realize that the gains of cooperation outweigh the price of further confrontation.”

Russia has denied that it intends to attack its neighbor but demanded guarantees from the West that NATO will not expand to Ukraine or other former Soviet nations or place its troops and weapons there. It also has urged NATO to roll back the deployments of its troops and weapons to Central and Eastern European nations that have joined the alliance after the end of the Cold War.

Washington and its allies firmly rejected Moscow’s demands but kept the door open to possible further talks on arms control and confidence-building measures to reduce the potential for hostilities.

Ryabkov insisted, however, that there can't be any meaningful talks on those issues if the West doesn't heed the main Russian requests for the non-expansion of NATO. He warned that the Russian demands “constitute a package, and we're not prepared to divide it into different parts, to start processing some of those at expense of standing idle on others.”

“We see the threat of Ukraine becoming ever more integrated in NATO without even acquiring a formal status of a NATO member state,” Ryabkov said, pointing at Western powers supplying Ukraine with weapons, training its troops and conducting joint drills. “This is something that goes right to the center of Russia's national security interests, and we will do our utmost to reverse this situation.”

Russia annexed the Crimean Peninsula from Ukraine in 2014 after mass protests prompted Ukraine’s Moscow-friendly leader to flee to Russia. At the same time, Russia also cast its support behind a separatist insurgency that swept over large areas in eastern Ukraine. More than 14,000 people have been killed in nearly eight years of fighting there.

Asked if Russia could accept a moratorium on NATO's expansion eastward, an idea circulated by some political experts, Ryabkov answered with a firm no, saying that Moscow has seen the West backtrack on previous promises.

He emphasized that "for us, the matter of priority is achievement of watertight, bulletproof, legally binding guarantees” that Ukraine and other ex-Soviet nations will not join the alliance.

Ryabkov suggested that the U.S. could also take a unilateral obligation to never vote for NATO membership for Ukraine and other ex-Soviet nations.

Russia has urged the U.S. and NATO to provide a quick written response. Peskov told reporters Russia expects to receive it “within days.”