Russian believers praying for the U.S. to return to its Christian roots 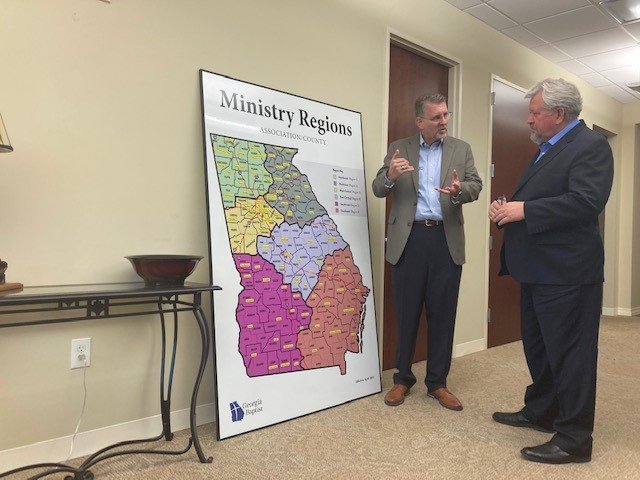 Buck Burch, left, a former missionary to Russia, talks with Peter Mitskevich, the leader of the Russian Baptist Union.

DULUTH, Ga. – Russian believers are concerned about the spiritual health of the United States and are praying the country will return to the Christian values it was founded on, the leader of the Russian Baptist Union said Friday.

Peter Mitskevich, who also serves as president of the Moscow Theological Seminary, is calling for America to return to the Lord so that it can again shine the light of the gospel into the world.

“We’re really concerned with where America is going,” he told The Christian Index in an interview on Friday. “We’re praying for the United States to be light, to be salt, to be a Christian nation that will be an example to the world of love, compassion, steadfastness and faithfulness. We’re praying that this light will be rekindled.”

Mitskevich and his wife, Tatiana, first visited the U.S. in the 1990s. They said they’ve seen a spiritual drift in the three decades since.

“People are changing,” his wife said. “Everything is changing. So rapidly, America has changed. Not in good ways. And this has really broken our hearts.”

Lifeway Research, the Southern Baptist Convention entity that studies religious trends in America, has been reporting similar findings for years as the U.S. experiences a spiritual drift.

More than half of Americans say religious beliefs are a matter of personal opinion, not objective facts, according to Lifeway’s latest State of Theology study.

“Many Americans treat theology like a choose-your-own adventure book,” said Lifeway Executive Director Scott McConnell, in releasing the findings last year. “It’s clear from certain beliefs that some people feel truth is something people are free to define on their own, and in doing so they possess seemingly incompatible beliefs.”

Mitskevich said his prayer is that the U.S. will experience spiritual revival.

Soviet authorities had repressed organized religion for most of the 20th Century. But in 1991, that suddenly changed, and American missionaries flooded in, working with urgency to share the gospel for fear the door of opportunity might close.

The Southern Baptist Convention’s International Mission Board ramped up its missionary staff there as well. The Georgia Baptist Mission Board’s missions catalyst, Buck Burch, served in Russia for a decade, during which time he worked alongside Mitskevich and his wife, helping to strengthen the Russian Baptist Union, which now includes about 1,000 churches with some 70,000 members. Those churches are baptizing between 1,500 and 1,700 new believers per year.

Burch said the U.S. church would be wise to heed Mitskevich’s call to return to its Christian roots.

“There has been a definite drift in American Christianity to more of a cultural nuance than a committed discipleship,” he said. “I think it is appropriate for us as American Christians to hear the external viewpoint of our global brothers as to our spiritual condition as a whole and to heed the call that once made us a locus of missions.”

Mitskevich is urging Georgia Baptists to pray for more Christian workers to share the gospel throughout Russia.

Russian Baptists, likewise, will be praying for their U.S. brethren, Mitskevich said.

“We’re praying for Americans to find peace in Christ, to have a passion to spread the Good News,” Mitskevich said. “We’re concerned about what’s happening with family values. We pray for America to be a Christian nation, to experience revival.”