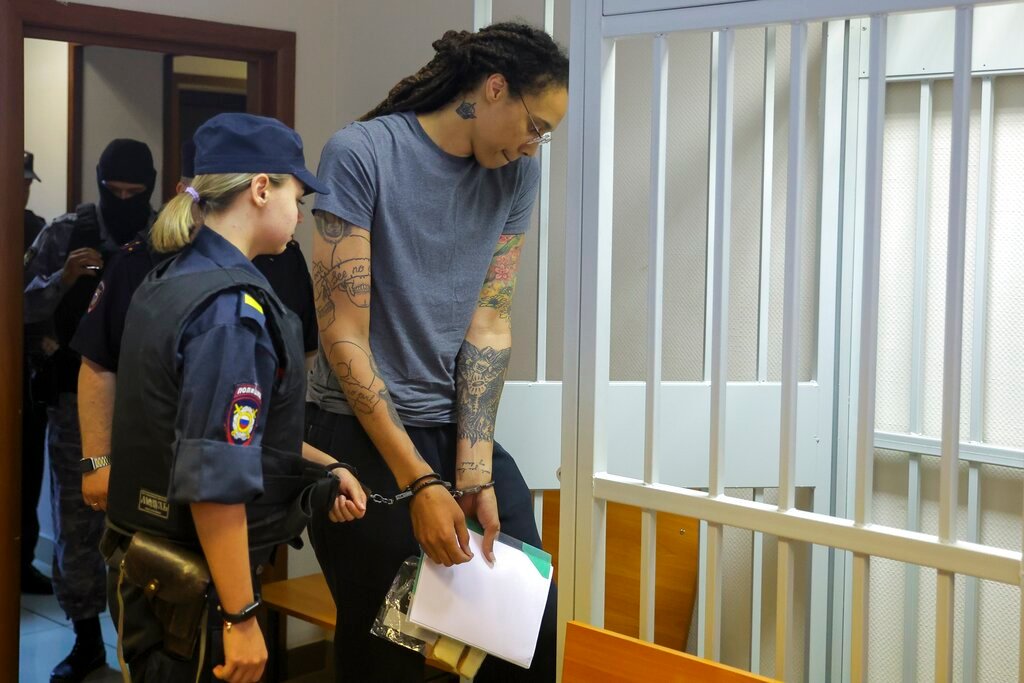 WNBA star and two-time Olympic gold medalist Brittney Griner, right, enters a cage in a courtroom prior to a hearing in Khimki just outside Moscow, Thursday, Aug. 4, 2022. (Evgenia Novozhenina/Pool Photo via AP) 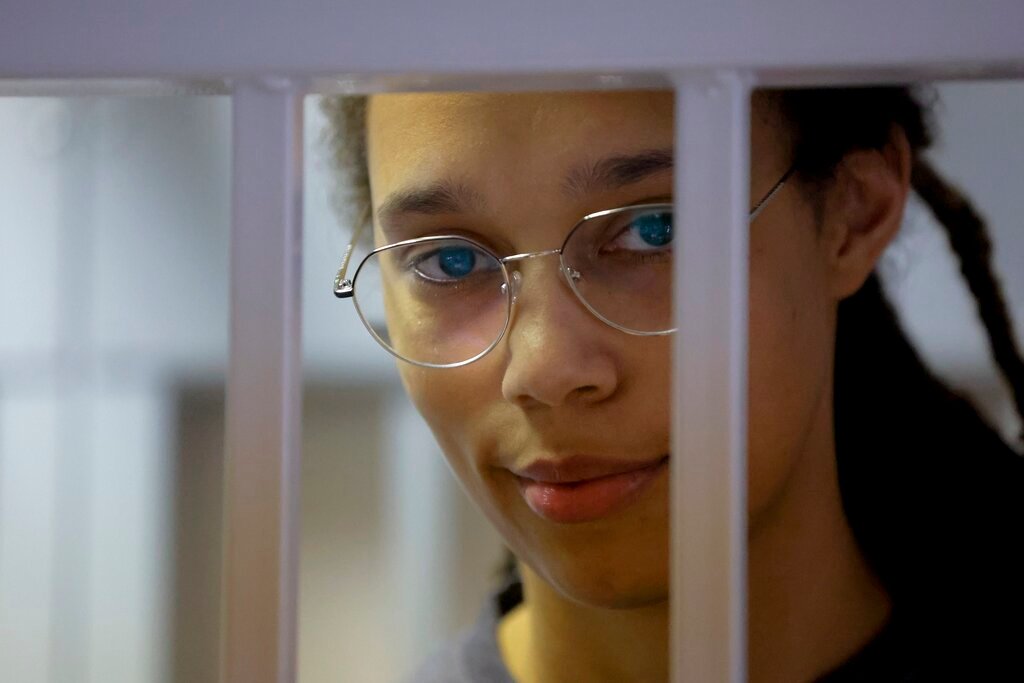 WNBA star and two-time Olympic gold medalist Brittney Griner stands in a cage in a courtroom prior to a hearing in Khimki just outside Moscow, Thursday, Aug. 4, 2022. (Evgenia Novozhenina/Pool Photo via AP) 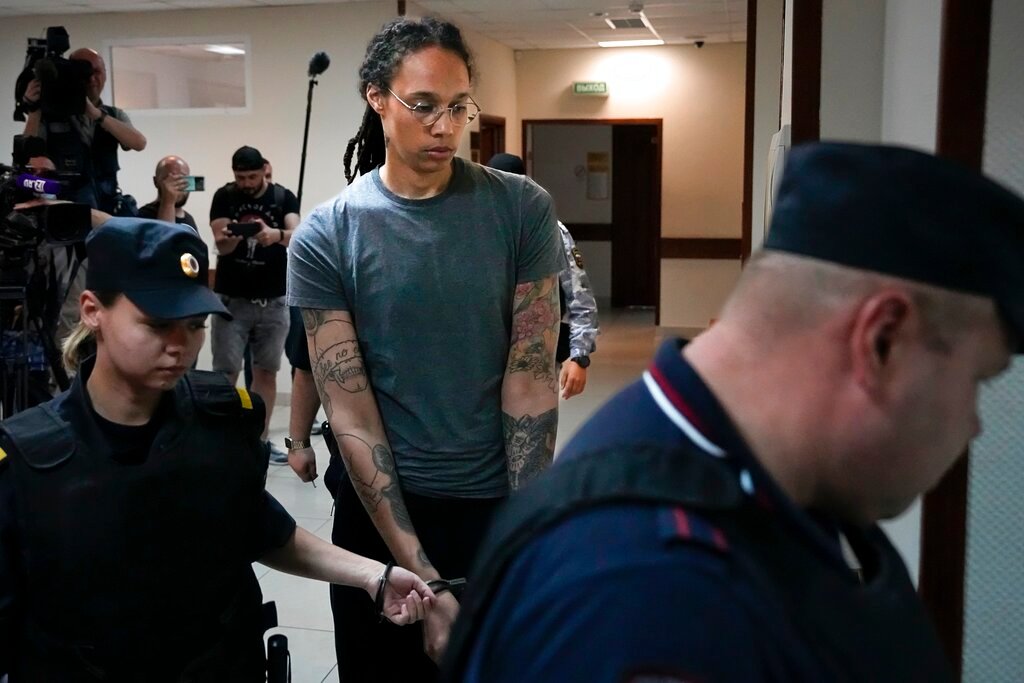 WNBA star and two-time Olympic gold medalist Brittney Griner, center, is escorted in a courtroom prior to a hearing, in Khimki just outside Moscow, Thursday, Aug. 4, 2022. (AP Photo/Alexander Zemlianichenko)
Previous Next
Posted Thursday, August 4, 2022 9:10 am
By JIM HEINTZ, Associated Press

KHIMKI, Russia (AP) — U.S. basketball star Brittney Griner was convicted Thursday in Russia of drug possession and sentenced to nine years in prison following a politically charged trial that came amid soaring tensions between Moscow and Washington over Ukraine and could lead to a high-stakes prisoner exchange between the two world powers.

The 31-year-old Griner, a two-time U.S. Olympic champion and an eight-time all-star with the WNBA’s Phoenix Mercury listened with a blank expression as an interpreter translated the verdict by Judge Anna Sotnikova. The judge also fined her 1 million rubles (about $16,700).

Outside the court, the U.S. Embassy's charge d’affaires Elizabeth Rood called the verdict “a miscarriage of justice.”

Before the unusually swift verdict was reached, an emotional Griner apologized to her family, teammates, and the Russian city of Yekaterinburg, where she plays in the WNBA offseason, “for my mistake that I made and the embarrassment that I brought on them.”

With her voice cracking, she added: “I hope in your ruling it does not end my life.”

A conviction is usually a prerequisite to arranging a prisoner exchange and also allows Griner to apply for a presidential pardon. Deputy Foreign Minister Sergei Ryabkov said last month that the “necessary judicial procedures” must be completed before any other steps can be taken.

The disclosure in July that the U.S. government was seeking a prisoner swap involving Griner reflected the growing pressure on the Biden administration to do more to bring her home. The U.S. State Department had earlier declared Griner to be “wrongfully detained” — a charge that Russia has sharply rejected.

Griner, recognized as one of the greatest players in WNBA history, has been detained since Feb. 17 after police said they found vape cartridges containing cannabis oil in her luggage upon landing at Moscow’s Sheremetyevo Airport. She was returning to Russia, where she has competed since 2014.

When she took the stand at her trial on July 7, Griner said: “I would like to plead guilty on the charges against me. But I had no intention of breaking any Russian law.” She added that she brought the vape canisters into Russia because she had packed in haste for her flight.

In later testimony, Griner described a confusing scene while being held at the airport, saying an interpreter provided by authorities translated only a fraction of what was being said to her and that officials told her to sign documents, but “no one explained any of it to me.” She also said she was not informed of her rights.

Her lawyers introduced evidence that Griner was using the medicinal cannabis for chronic pain and injuries sustained during her career and included a letter from her doctor. Griner testified she was aware that cannabis oil was outlawed in Russia and had not intended to break the law or “plan to smuggle anything into Russia.”

Trials in Russia proceed even after admissions of guilt, and there has been speculation her actions were an attempt to move the legal process along in hopes of a possible prisoner swap.

On July 27, U.S. Secretary of State Antony Blinken said Washington has offered a deal to Russia aimed at bringing home Griner and Whelan in a sharp reversal of previous policy. Details of the proposal were not announced, though a person familiar with the matter said the U.S. has offered to trade convicted Russian arms dealer Viktor Bout for Whelan and Griner. The person insisted on anonymity to discuss an ongoing investigation.

Her detention was made public only after Russian troops moved into Ukraine, as relations between Russia and the United States hit new lows after Washington led the West in bringing sanctions against Moscow.

Elizabeth Rood, the U.S. Embassy’s charge d’affaires, has attended the trial in the Moscow suburb of Khimki, where the airport is located, and said that American officials are monitoring her case closely, along with those of all U.S. citizens detained or in prison in Russia.

Griner, a 6-foot-9 center, has 12 of the 15 regular season dunks in WNBA history and set the single-year record for blocks with 129 in 2014. She led the league in scoring twice. She was a two-time Associated Press college basketball player of the year and led Baylor to a 40-0 season and the 2012 NCAA title. She was the No. 1 pick by Phoenix in the 2013 draft.

Russian media have speculated repeatedly that Griner could be swapped for Bout, nicknamed “the Merchant of Death,” who is serving a 25-year sentence in the U.S. after being convicted of conspiracy to kill U.S. citizens and providing aid to a terrorist organization. Russia has agitated for Bout’s release for years.