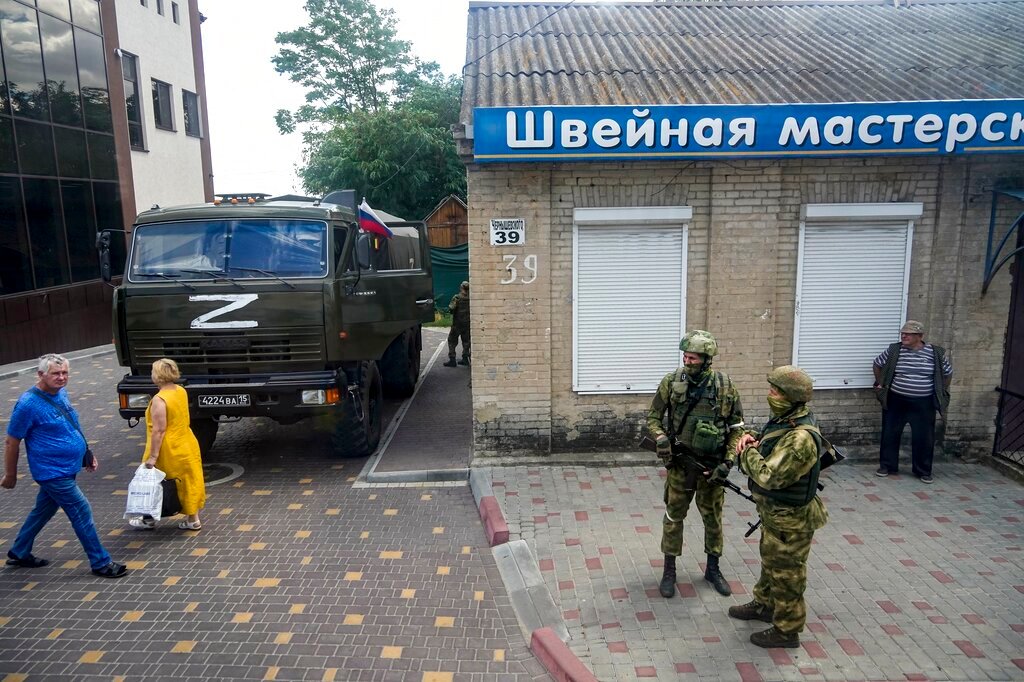 Russian soldiers guard an office for Russian citizenship applications as their military truck is parked nearby, in Melitopol, south Ukraine, on July 14, 2022. (AP Photo, File) 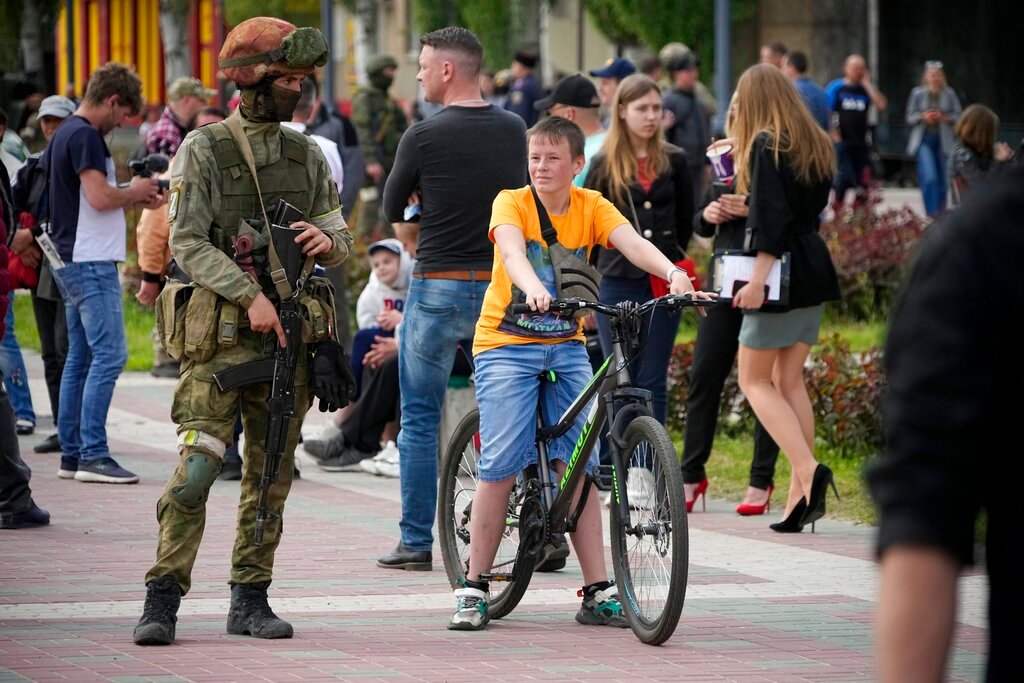 A Russian serviceman stands guard as local civilians walk in the center of Melitopol, Zaporizhzhia region, in territory under Russian military control, southeastern Ukraine, on May 1, 2022. (AP Photo, File)
Previous Next
Posted Thursday, November 3, 2022 10:18 am
By YURAS KARMANAU, Associated Press

KYIV, Ukraine (AP) — Not long after Russian tanks rolled into Ukraine, soldiers broke down the office door of Melitopol Mayor Ivan Fedorov. They put a bag over his head, bundled him into a car and drove him around the southern city for hours, threatening to kill him.

Fedorov, 34, is one of over 50 local leaders who have been held in Russian captivity since the war began on Feb. 24 in an attempt to subdue cities and towns coming under Moscow's control. Like many others, he said he was pressured to collaborate with the invaders.

“The bullying and threats did not stop for a minute. They tried to force me to continue leading the city under the Russian flag, but I refused,” Fedorov told The Associated Press by phone last month in Kyiv. “They didn’t beat me, but day and night, wild screams from the next cell would tell me what was waiting for me.”

As Russians seized parts of eastern and southern Ukraine, civilian administrators and others, including nuclear power plant workers, say they have been abducted, threatened or beaten to force their cooperation — something that legal and human rights experts say may constitute a war crime.

Ukrainian and Western historians say the tactic is used when invading forces are unable to subjugate the population.

This year, as Russian forces sought to tighten their hold on Melitopol, hundreds of residents took to the streets to demand Fedorov's release. After six days in detention and an intervention from President Volodymyr Zelenskyy, he was exchanged for nine Russian prisoners of war and expelled from the occupied city. A pro-Kremlin figure was installed.

“The Russians cannot govern the captured cities. They have neither the personnel nor the experience,” Fedorov said. They want to force public officials to work for them because they realize that someone has to “clean the streets and fix up the destroyed houses.”

In the southern city of Kherson, one of the first seized by Russia and a key target of an unfolding counteroffensive, Mayor Ihor Kolykhaiev tried to stand his ground. He said in April that he would refuse to cooperate with its new, Kremlin-backed overseer.

Kirill Stremousov, deputy head of the Russian-installed regional administration, repeatedly denounced Kolykhaiev as a "Nazi,” echoing the false Kremlin narrative that its attack on Ukraine was an attempt to “de-Nazify” the country.

Kolykhaiev continued to supervise Kherson's public utilities until his arrest on June 28. His whereabouts remain unknown.

Several mayors have been killed, shocking Ukrainian society. Following the discovery of mass burials in areas recaptured by Kyiv, Ukrainian and foreign investigators continue to uncover details of extrajudicial killings of mayors.

The body of Olga Sukhenko, who headed the village of Motyzhyn, near Kyiv, was found in a mass grave next to those of her husband and son after Russian forces retreated. The village, with a prewar population of about 1,000, is a short drive from Bucha, which saw hundreds of civilians killed under Russian occupation.

Residents said Sukhenko had refused to cooperate with the Russians. When her body was unearthed on the outskirts of Motyzhyn, her hands were found tied behind her back.

Mayor Yurii Prylypko of nearby Hostomel was gunned down in March while handing out food and medicine. The prosecutor general’s office later said his body was found rigged with explosives.

There has been no news about the fate of Ivan Samoydyuk, the deputy mayor of Enerhodar, site of the Zaporizhzhia Nuclear Power Plant. Samoydyuk, abducted in March, has repeatedly been considered for a prisoner swap, but his name was struck off the list each time, Mayor Dmytro Orlov told the AP.

The 58-year-old deputy mayor was seriously ill when seized, Orlov said, and “we don’t even know if he’s alive.” At best, Samoydyuk is sitting in a basement somewhere "and his life depends on the whim of people with guns,” he added.