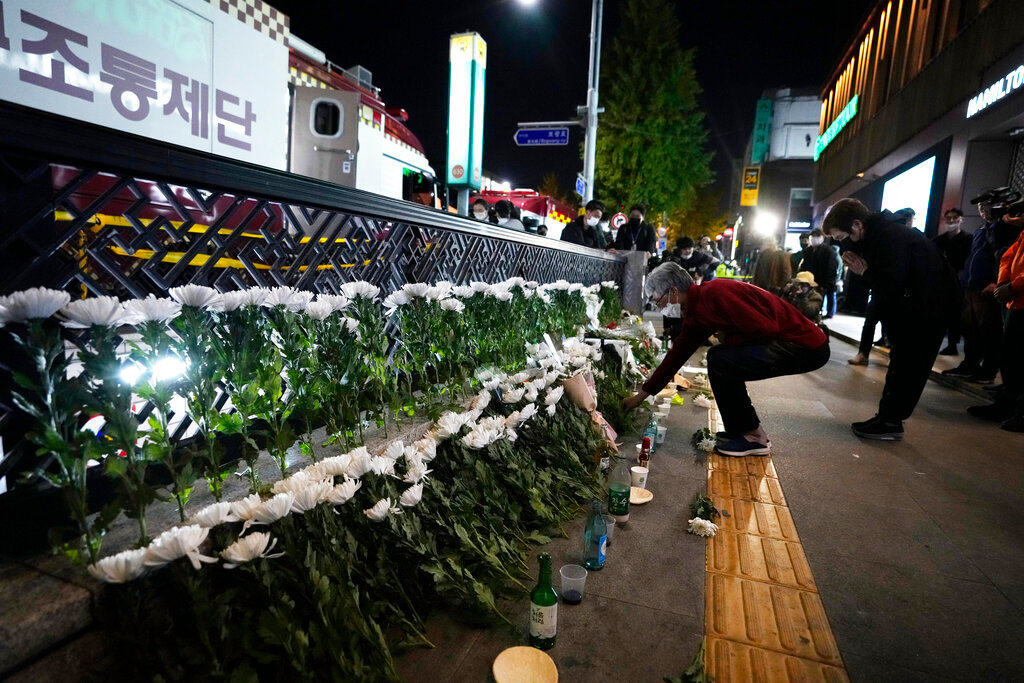 A woman places flowers at a tribute for victims near the scene of a deadly accident in Seoul, South Korea, Sunday, Oct. 30, 2022, following Saturday night's Halloween festivities. (AP Photo/Ahn Young-joon) 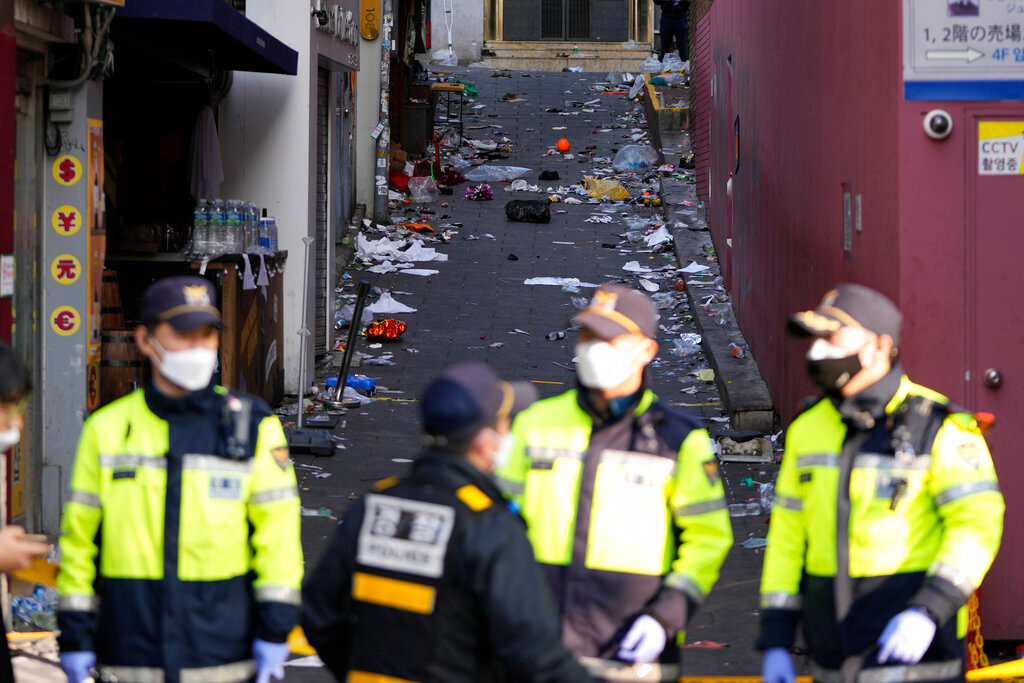 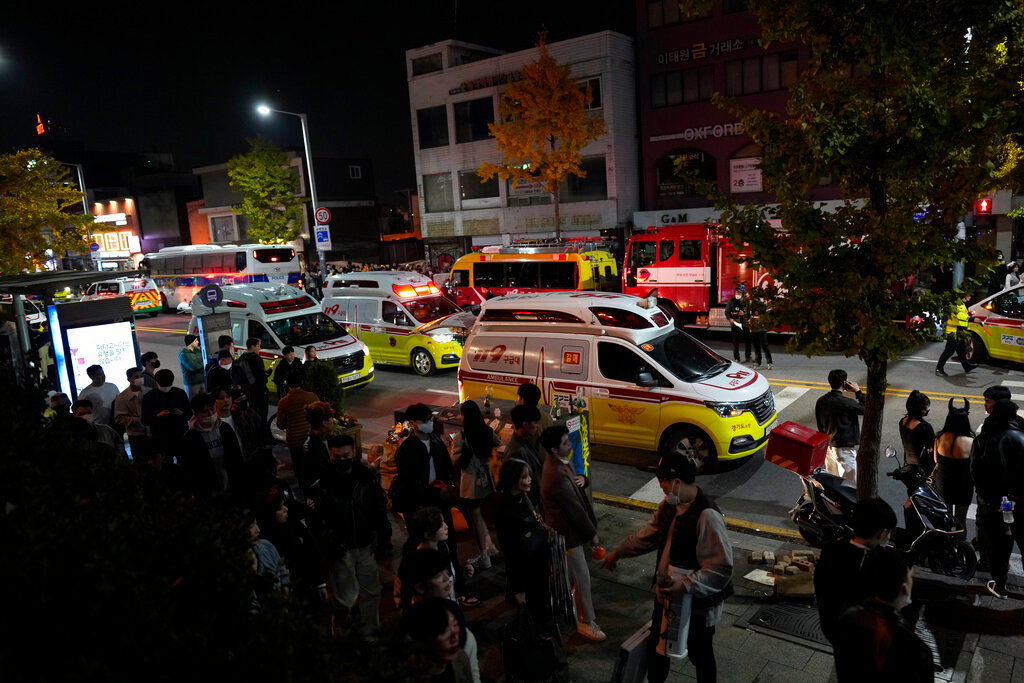 It remained unclear what led the crowd to surge into the downhill alley in the Itaewon area on Saturday night, and authorities promised a thorough investigation. Witnesses said people fell on each other “like dominoes,” and some victims were bleeding from their noses and mouths while being given CPR.

Kim Mi Sung, an official at a nonprofit organization that promotes tourism in Itaewon, said she performed CPR on 10 people who were unconscious, mostly women wearing witch outfits and other Halloween costumes. Nine of them were declared dead on the spot.

“I still can’t believe what has happened. It was like a hell,” Kim said.

As of Sunday evening, officials said 153 people were killed and 133 were injured. Nearly two-thirds of those killed — 97 — were women. More than 80% of the dead were in their 20s and 30s, and at least four were teenagers.

The Ministry of the Interior and Safety said the death count could further rise as 37 of the injured people were in serious condition.

Witnesses said many people appeared not to realize the disaster that was unfolding steps away from them. Some clad in Halloween costumes continued to sing and dance nearby as others lay lifeless on the ground.

Ken Fallas, a Costa Rican architect who went to Itaewon with expatriate friends, used his smartphone to film video showing unconscious people being carried out from the alley as others shouted for help. He said the loud music made things more chaotic.

“When we just started to move forward, there was no way to go back,” Fallas said. “We didn’t hear anything because the music was really loud. Now, I think that was one of the main things that made this so complicated.”

At least 20 of the dead are foreigners from China, Russia, Iran and elsewhere. There is one American among the dead, the Interior Ministry said in a release.

Authorities said thousands of people have called or visited a nearby city office, reporting missing relatives and asking officials to confirm whether they were among those injured or dead after the crush.

The bodies of the dead were being kept at 42 hospitals in Seoul and nearby Gyeonggi province, according to Seoul City, which said it will instruct crematories to burn more bodies per day as part of plans to support funeral proceedings.

An estimated 100,000 people had gathered in Itaewon for the country’s biggest outdoor Halloween festivities since the pandemic began. The South Korean government had eased COVID-19 restrictions in recent months.

While Halloween isn’t a traditional holiday in South Korea — where children rarely go trick-or-treating — it’s still a major attraction for young adults, and costume parties at bars and clubs have become hugely popular in recent years.

Seoul’s marquee Halloween destination is Itaewon, near where the former headquarters of U.S. military forces in South Korea operated for decades before moving out of the capital in 2018. The expat-friendly district is known for its trendy bars, clubs and restaurants.

Witnesses said the streets were so densely clogged with people and slow-moving vehicles that it was practically impossible for emergency workers and ambulances to swiftly reach the alley near Hamilton Hotel, a major party spot in Seoul.

South Korean President Yoon Suk Yeol declared a one-week national mourning period on Sunday and ordered flags at government buildings and public offices to fly at half-staff. Around 100 businesses in the Hamilton Hotel area have agreed to shut down their shops through Monday to reduce the number of partygoers who would come to the streets through Halloween day.

During a televised speech, Yoon said supporting the families of the victims, including their funeral preparations, and the treatment of the injured would be a top priority for his government. He also called for officials to thoroughly investigate the cause of the accident and review the safety of other large cultural and entertainment events.

“This is really devastating. The tragedy and disaster that need not have happened took place in the heart of Seoul amid Halloween (celebrations),” Yoon said during the speech. “I feel heavy-hearted and cannot contain my sadness as a president responsible for the people’s lives and safety.”

After the speech, Yoon visited the alley where the disaster occurred. Local TV footage showed Yoon inspecting the trash-filled alley and being briefed by emergency officials.

Among the 20 foreigners who died are four from China; three from Russia; two from Iran; and one each from Vietnam, Austria, Norway, Uzbekistan, Kazakhstan, Sri Lanka and the United States, the Interior Ministry said. It added the nationalities of the four other foreigners have not been confirmed.

Some local media said the tally of foreign dead rose to 26. France and Thailand each said one and Japan said two of their nationals had also died during the Itaewon disaster, but the South Korean Interior Ministry couldn't immediately confirm the reports.