Ruth Ossewaarde has returned to Illinois while her husband, Donald, appeals his arrest by Russian authorities for the Independent Baptist missionaries holding a Bible study in their home in the town of Oryol, Russia.
Posted Friday, September 2, 2016 10:26 am
Baptist Press

ORYOL, Russia (BP) — Missionaries Donald and Ruth Ossewaarde always suspected their Gospel ministry in Oryol, Russia, wouldn't last when they began in 2002, he told Baptist Press by telephone from his home in the central Russian town of 320,000. 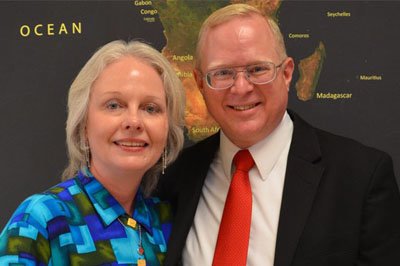 Ruth Ossewaarde has returned to Illinois while her husband, Donald, appeals his arrest by Russian authorities for the Independent Baptist missionaries holding a Bible study in their home in the town of Oryol, Russia.

But he had not expected to be among the first people arrested under Russia's new law prohibiting organizations from evangelizing outside church walls and without a government permit.

Two weeks after police interrupted Ossewaarde's Sunday morning Bible study in his home with 15 students, arrested him, and fined him 40,000 rubles, about $600, the Independent Baptist missionary said he will leave the country amid veiled threats against his life, even though he has appealed the charges against him.

"I really think that the political situation in Russia has reached a point where they are going to, one way or the other, they're going to get rid of me," he told BP. "So I really decided to end my operations here. It's sad because there are people here that really enjoy what we do. It's a big part of their life."

Ossewaarde has conducted street evangelism, distributed printed materials, and held weekly Bible studies and prayer meetings in his home. He has ended those outreaches, is awaiting a court date for his appeal, is trying to sell his apartment and house, and is making plans to return to the U.S.

"I'm very sad," he said. "This is a dream that I've been living for 22 years since the first time I visited in 1994. It took a year or two for me to realize God was calling me to come over permanently, because I had just been making visits. In 1996 I realized this was my calling."

As an Independent Baptist, he travelled the U.S. for several years to raise financial support among churches for the mission before moving to Ukraine in 1999 and Oryol, Russia, three years later.

"This has been my life, what I've lived for," he said. "I guess we expected from the beginning that this wasn't going to last. I guess we were surprised that it lasted as long as it did. But now it just seems like the window and the door of opportunity is finally closing."

He has referred his Bible study participants and others to the Russian Baptist Church.

"But still," he said of the Christians, "they're just devastated."

A situation where anything can happen

Ossewaarde was arrested Aug. 14 and forced to attend a hearing in the city's Railway District Court that same day, with the representation of a court-appointed attorney who advised him to accept the verdict, pay the fine, and leave the city, because anything might happen to him and his family, according to a press release on Ossewaarde's website.

His wife has already returned to Illinois, where their home congregation Faith (Independent) Baptist Church is located in Bourbonnais.

"I didn't feel that she was safe after ... I had a thinly veiled threat against myself and my wife so I just figured it was time for her to go home," he said. "I want to complete the appeal process. If I can successfully challenge this it will make it easier on other missionaries that would probably otherwise be prosecuted."

Ossewaarde was charged under Article 5.26, Part 5 of the new religion law for holding religious services in his home, advertising services on bulletin boards in nearby neighborhoods, and failing to give authorities written notification when he began his religious activities. He has hired private attorneys.

"What we have in our favor ... is the way they wrote the law is very ineffective in accomplishing what they wanted to accomplish," Ossewaarde said, clarifying that the law passed July 20 limits missionary activity by religious organizations in particular, and he operates independently of any group. "They wanted to make all missionary activity illegal. The law as written doesn't apply to me, and that's why I believe that we will win this appeal. But long term, obviously they can write another law that says missionary activity is just plain outlawed. I certainly consider myself a missionary."

Five others had been arrested under the law as of Aug. 22, Forum 18 reported, including another Baptist who was fined 5,000 rubles; a Hare Krishna, acquitted; a Protestant, fined 50,000 rubles; a Pentecostal, who was to appear in court Aug. 29, and a Seventh-day Adventist, who was awaiting a trial date.

Freedom shackled under the guise of patriotism

Ossewaarde had enjoyed religious freedom before the new law, although the Russian Orthodox Church held a religious monopoly of sorts.

"All other religious movements are looked at as foreign and suspicious and I've heard people say to each other that if you go to a foreign religion meeting that you're not patriotic," he said. "Anybody other than an Orthodox Christian is referred to as a sectarian or cultist. Up until recently, we had complete freedom to be able to distribute literature, talk to people on the street. We were even able to put literature in mail boxes."

Ossewaarde first evangelized in Russia during a 1994 visit there after the collapse of the Soviet Union.

"The first time I came over with a group of evangelists and pastors, we had two weeks of meetings and we just had thousands of people that responded to the Gospel invitations and it was very exciting back in those days," he said. "We just thought there was going to be a great revival. It was going to sweep across Russia. And Russia and America were going to become great friends and it was just going to be a wonderful thing. And that great promise that we all hoped for just didn't come to pass."

"It's a constant stream every day of anti-American and anti-foreign propaganda," he said. "For them to go after a foreigner like me is good propaganda."