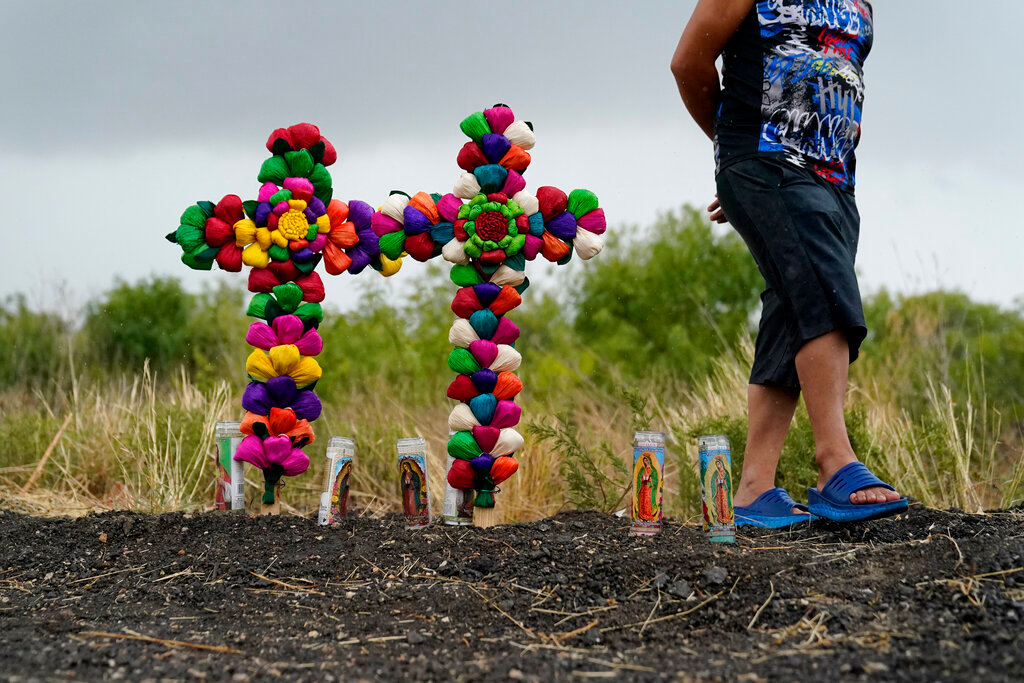 A man pays his respects Tuesday, June 28, 2022, at the site where officials found dozens of people dead Monday in a semitrailer containing suspected migrants in San Antonio. (AP Photo/Eric Gay) 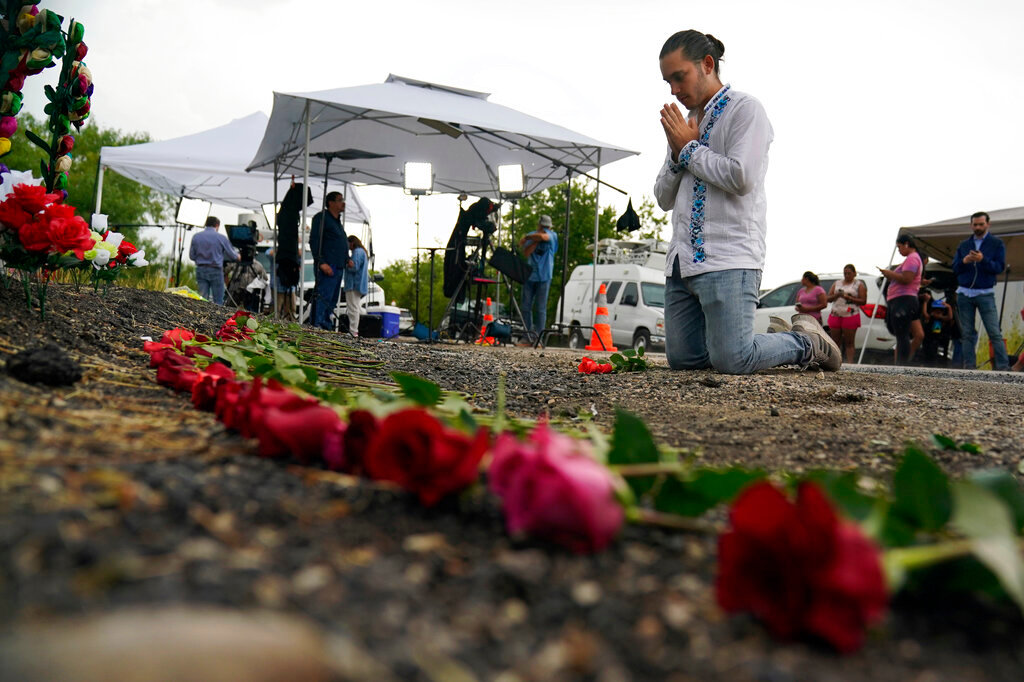 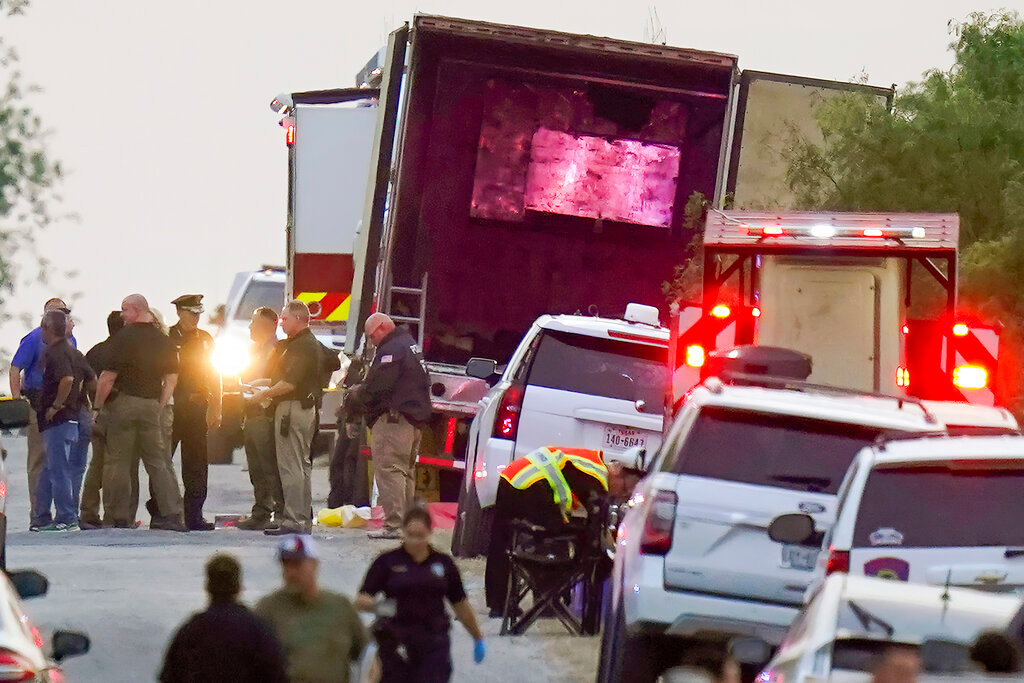 Police and other first responders work the scene where officials say dozens of people have been found dead and multiple others were taken to hospitals with heat-related illnesses after a semitrailer containing suspected migrants was found Monday, June 27, 2022, in San Antonio. (AP Photo/Eric Gay)
Previous Next
Posted Wednesday, June 29, 2022 10:34 am
By PAUL WEBER, FABIOLA SÁNCHEZ and MARK STEVENSON, Associated Press

SAN ANTONIO (AP) — Victims have been found with no identification documents at all and in one case a stolen ID. Remote villages lack phone service to reach family members and determine the whereabouts of missing migrants. Fingerprint data has to be shared and matched by different governments.

More than a day after the discovery of a stifling trailer in San Antonio where 51 migrants who died were abandoned in the sweltering heat, few identities of the victims have been made public, illustrating the challenges authorities face in tracing people who cross borders clandestinely.

By Tuesday afternoon, medical examiners had potentially identified 34 of the victims, said Bexar County Commissioner Rebeca Clay-Flores, who represents the district where the truck was abandoned. Those identities were not yet confirmed pending additional steps, such as fingerprints, and she described it as a challenge with no timeline on when the process might be finished.

The bodies were discovered Monday afternoon on the outskirts of San Antonio in what is believed to be the nation's deadliest smuggling episode on the U.S.-Mexico border. More than a dozen people were taken to hospitals, including four children. Three people have been arrested.

With little information about the victims, desperate families of migrants from Mexico and Central America frantically sought word of their loved ones.

Among the dead, 27 are believed to be of Mexican origin based on documents they were carrying, according to Rubén Minutti, the Mexico consul general in San Antonio. Several survivors were in critical condition with injuries such as brain damage and internal bleeding, he said. About 30 people had reached out to the Mexican Consulate looking for loved ones, officials said.

The process is painstaking because among the pitfalls are fake or stolen documents.

Mexico’s foreign affairs secretary identified two people Tuesday who were hospitalized in San Antonio on Tuesday morning. But it turned out that one of the identification cards he shared on Twitter had been stolen last year in the southern state of Chiapas.

Haneydi Antonio Guzman, 23, was safe and sound in a mountain community more than 1,300 miles  away from San Antonio on Tuesday when she began receiving messages from family and friends. There is no phone signal there, but she has internet access.

Journalists started showing up at her parents’ home in Escuintla -- the address on her ID that was stolen and found in the truck — expecting to find her worried relatives.

“That’s me on the ID, but I am not the person that was in the trailer and they say is hospitalized," she said.

“My relatives were contacting me worried, asking where I was,” Antonio Guzman said. “I told them I was fine, that I was in my house and I clarified it on by (Facebook page).”

Foreign Affairs Secretary Marcelo Ebrard deleted the original tweet identifying her without further comment. The other hospitalized victim Ebrard identified Tuesday turned out to be accurate.

In the southern Mexican state of Oaxaca, municipal officials in San Miguel Huautla were traveling to the community of 32-year-old José Luis Guzmán Vásquez late Tuesday to find out if his mother wanted to travel to San Antonio to be with him in the hospital.

Manuel Velasco López, San Miguel Huautla’s municipal secretary, said that another cousin had been traveling with Guzmán Vásquez and was now considered missing.

Yet another cousin, Alejandro López, told Milenio television that their family worked in farming and construction and that they migrated because “we don’t have anything but weaving hats, palms and handicrafts.”

“Growing corn, wheat and beans is what we do in this region and that leads to a lot of our people emigrating and going to the United States,” he said.

“All of the young people start to think about going (to the U.S.) as soon as they turn 18,” said migrant activist Carmelo Castañeda, who works with the nonprofit Casa del Migrante. “If there aren’t more visas, our people are going to keep dying.”

Migrants typically pay $8,000 to $10,000 to be taken across the border and loaded into a tractor-trailer and driven to San Antonio, where they transfer to smaller vehicles for their final destinations across the United States, said Craig Larrabee, acting special agent in charge of Homeland Security Investigations in San Antonio.

Conditions vary widely, including how much water passengers get and whether they are allowed to carry cellphones, Larrabee said.

Authorities think the truck discovered Monday had mechanical problems when it was left next to a railroad track in an area of San Antonio surrounded by auto scrapyards that brush up against a busy freeway, said Bexar County Judge Nelson Wolff.

During a vigil held Tuesday evening in the rain at a San Antonio park, many of the more than 50 people who attended expressed sadness, frustration and anger at the deaths and what they described as a broken immigration system.

Back in Puebla, farmer Juan Sánchez Carrillo, 45, was sickened when he heard the news of the deaths in Texas.

He himself narrowly escaped death, when he and his friends ran away from dozing migrant rustlers in the mountains near Otay Mesa near San Diego. The criminals — who Sanchez Carrillo believes were in cahoots with smugglers who brought him over the border — pointed rifles at the group of 35 migrants and threatened to kill them unless they came up with $1,000 each.

“For the smugglers, we the migrants are not human,” Sánchez Carrillo said. “For them we are no more than merchandise.”