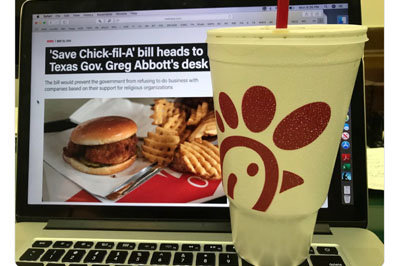 AUSTIN, Texas (BP) — A religious freedom initiative dubbed the "Save Chick-fil-A bill" jumped its last hurdle in the Texas Legislature May 23 and is headed for Gov. Greg Abbott's expected signature.

"What are the odds I'll sign the Chick-fil-A bill? I'll let you know after dinner," Abbott tweeted with a photo of a Chick-fil-A sandwich, waffle potato fries, and beverage as the bill was awaiting its last legislative vote. 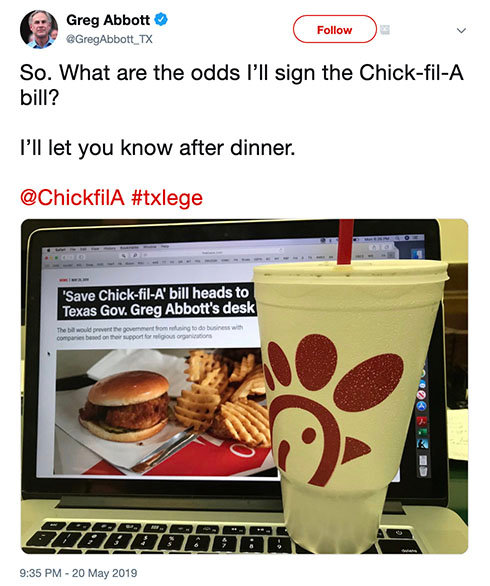 Governor Greg Abbott's tweet gave a strong indication as to his leaning on the religious liberty legislation stemming from the San Antonio City Council voting to ban Chick-fil-A from its airport.

Senate Bill 1978 is designed to prevent discrimination based on a person's religious beliefs and conscience, including biblically-based views of marriage. Texas Values dubbed it the "Save Chick-fil-A" bill after the San Antonio City Council banned the restaurant from the San Antonio International airport, complaining that the franchise donates to Christian groups including the Salvation Army and the Fellowship of Christian Athletes.

The Senate first passed the legislation May 16, but the House passed it with an amendment May 21, sending it back to the Senate for approval of the amended version. The amendment removes authority the bill would have given the attorney general to "bring an action for injunctive or declaratory relief against a governmental entity or an officer or employee of a governmental entity to enforce compliance" with the legislation.

The bill would specifically prevent state and local governments from discriminating against individuals or entities based on the individuals' beliefs about marriage, according to the bill analysis on the Texas Legislature website.

Chick-fil-A was not active in endorsing or promoting the bill, but Texas Values attached the Chick-fil-A moniker to a religious liberty agenda in April, hosting a "Save Chick-fil-A Day" demonstration at the Texas Capitol.

Texas Values was responding to a March 21 vote by the San Antonio City Council to block Chick-fil-A from the airport, with one councilman accusing Chick-fil-A of having a "legacy of hate" because it donates to charities considered to oppose LGBT rights. The council is among a growing number of groups in the U.S. to ban Chick-fil-A on similar accusations.

The Chick-fil-A Foundation has defended its charitable contributions.

"The work of the Foundation is committed to youth and education," the foundation said in a March 21 press release. "The Foundation's giving helps with economic mobility of young people by focusing on homelessness and poverty, education, and community revitalization, and is done with no political or social agenda.

"The narrative that our giving was done to support a political or non-inclusive agenda is inaccurate and misleading," the foundation said.

In 2017, the foundation gave $1.6 million to the Fellowship of Christian Athletes to support summer camps for inner-city youths, $150,000 to the Salvation Army to support children's programs in Atlanta, and an additional $2.43 million to non-profits and award recipients located across the U.S., the foundation said in its press release.

"As we await action by the federal government, First Liberty is still conducting our inquiry into the actions of the San Antonio City Council and will refer all information we discover to the relevant agencies," First Liberty attorney Keisha Russell told BP a week ago. "San Antonio deserves to lose all relevant federal funds as a result of its religious bigotry towards Chick-fil-A."

Chick-fil-A states as its purpose, "to glorify God by being a faithful steward of all that is entrusted to us and to have a positive influence on all who come into contact with Chick-fil-A." All chain locations are closed on Sundays and the family-owned business has repeatedly maintained that it does not discriminate against LGBT individuals.