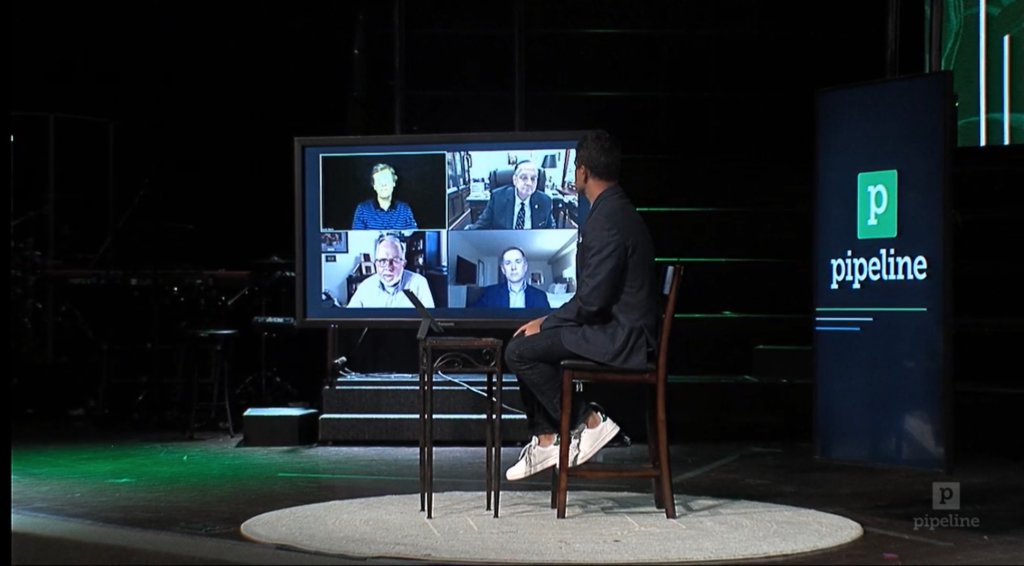 The four current candidates for president of the Southern Baptist Convention took part in an online forum Tuesday (May 4), sharing their testimonies as well as their thoughts on the future of the SBC. SPECIAL/Baptist Press
Posted Thursday, May 6, 2021 11:53 am
Baptist Press

The four current candidates for president of the Southern Baptist Convention took part in an online forum Tuesday (May 4), sharing their testimonies as well as their thoughts on the future of the SBC. SPECIAL/Baptist Press

NASHVILLE – The four current candidates for president of the Southern Baptist Convention took part in an online forum Tuesday (May 4), sharing their testimonies as well as their thoughts on the future of the SBC.

The discussion was hosted by Leadership Pipeline, a fellowship of Southern Baptist pastors under the age of 40. Jordan Easley, senior pastor of First Baptist Church in Cleveland, Tenn., led participants in the forum. Joining him were R. Albert Mohler Jr., president of Southern Baptist Theological Seminary in Louisville, Ky.; Mike Stone, pastor of Emmanuel Baptist Church in Blackshear, Ga.; Randy Adams, executive director/treasurer of the Northwest Baptist Convention; and Ed Litton, pastor of Redemption Church in Saraland, Ala.

Voting for SBC officers will take place June 15, during the Tuesday afternoon session of the 2021 SBC Annual Meeting. The forum, which lasted a little more than an hour, is available at sbcpipeline.com.

Easley said the desire was to have a “very important conversation” about how the SBC can maximize its role “in fulfilling the Great Commission, and what needs to happen in order for us to get there.” After each candidate shared his testimony of salvation, Easley asked two questions:

Why did you feel personally led to accept a nomination for SBC president? Envisioning the SBC in 20 years, how would your presidency help us move forward in fulfilling the Great Commission together?

Each said he was asked by others to consider a nomination, and said prayer was a cornerstone of the decision.

“It seems like our convention is at a crossroads,” Litton said, noting challenges he said have been exacerbated by the COVID-19 pandemic, which led to the cancellation of the 2020 SBC Annual Meeting.

“We’re focusing on theological arguments that are precious to us … but our ability to debate many times, with the theology, has become centered for some,” he said. “And what needs to be centered in Southern Baptist life is the gospel of Jesus Christ.”

Adams, who grew up in Whitefish, Mont., pointed to his unique background. He came to know Christ in an Assembly of God church, but became affiliated through Baptist student ministry while in college. His parents later left the family’s sawmill behind to serve as missionaries through the International Mission Board. He said his unique background, including his ministry in non-South SBC states – he has been executive director/treasurer of the Northwest Baptist Convention since 2013 – contributed to his concern over the Great Commission Resurgence adopted by SBC messengers in 2010.

Saying “missions and evangelism have always been my heartbeat,” Adams cited declining statistics in baptisms, church plants and Cooperative Program giving and called the last decade the “worst in our 175-year history in terms of decline.”

“Anyone who knows the facts and the numbers understands we’re in trouble,” he said.

Mohler, who has been president at Southern since 1993, expressed his gratitude for the SBC, saying he’d “never experienced a moment in my life that wasn’t blessed by and invested in by Southern Baptists.” He joined the other candidates in calling the current moment a crucial one for the SBC.

“We need really good stewardship of this denomination to make certain that in the 21st century we’re faithful and effective,” he said.

Though Mohler noted “not all, thanks be to God,” he added: “We’re facing headwinds that the Southern Baptist Convention has never faced before.”

Stone, who is in his 19th year as pastor of Emmanuel Baptist in the small south Georgia town of Blackshear and is the immediate past chairman of the SBC Executive Committee, described himself as unapologetic in his support of the Cooperative Program. Raised in the Pentecostal tradition, he became a Southern Baptist because of its biblical doctrine. He said the SBC president, as the most visible figurehead for the Convention, should represent its pastors.

Stone said churches in his area are becoming more “disengaged” and “disinterested” and “increasingly dis-invested” in the SBC, which he said was reflected in the Georgia Baptist Convention’s budget decrease over the last 15 years “from fifty million to thirty-seven-and-a-half million.” Georgia Baptist messengers approved a $52 million budget at their 2006 annual meeting and $37,835,000 at their gathering last fall.

The participants said gauging the impact today’s decisions might have on the SBC in 20 years can be a challenge. But they said decisions should be weighed in light of a changing culture and Southern Baptists’ continued mission of communicating the gospel.

“Imagine our context 20 years from now,” Mohler said. “Just think of the social changes. … We’re going to be facing the headwinds of hostility in this culture. … We’re about to find out how many Christians there are in the United States … and how many Southern Baptists there are, because people are going to be paying a price to be members of our churches.”

Adams said, “there’s still a great deal of strength in Southern Baptist churches” in their embrace of theology, the Baptist Faith & Message “and most of all in the Word of God as inerrant, sufficient and true,” but said there is a critical need for redirection. He said trust must be rebuilt through transparency, accountability and greater participation among SBC churches.

Stone said his “highest calling” in ministry is as a husband, father and pastor. As such, he said, his leadership goals would derive from his role as pastor. He said God doesn’t need an individual or organization to accomplish His will, and expressed concern that the SBC of the future would remain “the kind of people God would use.”

“There will be some iteration of the Southern Baptist Convention 20 years from now,” Stone said, “but the idea that it will be something that is useful for evangelical, conservative, Bible-believing Christianity sharing the true gospel … that is not a given. … We need to be usable, but God does not have to have us.”

Litton, who is in his 27th year as pastor of Redemption Church, said the Baptist Faith & Message is “sticky enough” for Southern Baptists to remain focused on their mission together without becoming splintered over debates around tertiary issues. He said the SBC must take steps to foster unity among churches in a biblical way.

“What God wants us to do is not attack each other but work out this stuff together for the purpose of advancing the gospel,” he said.