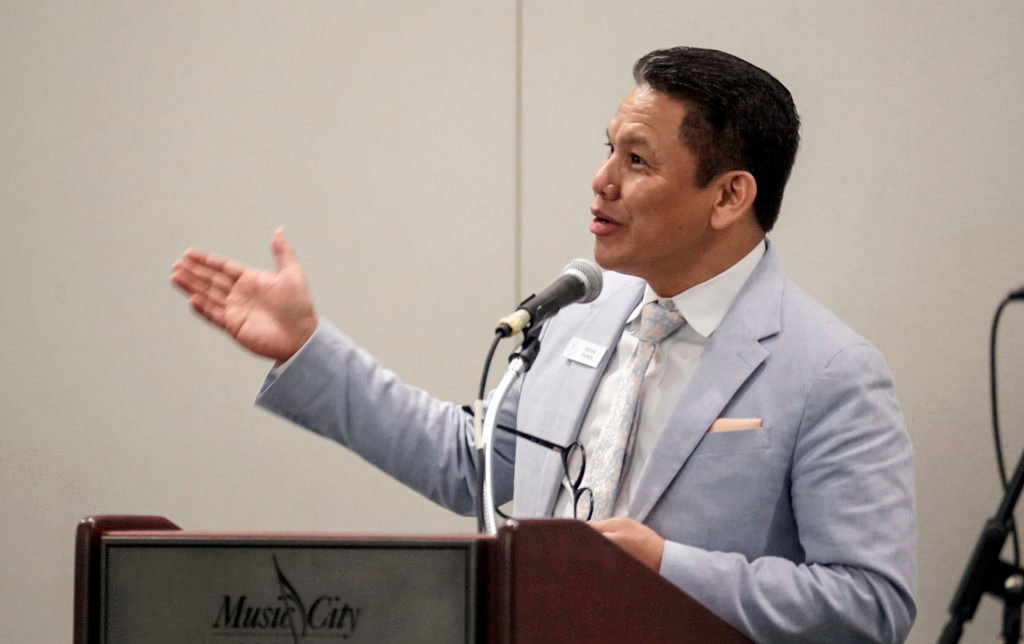 NASHVILLE (BP) – About 130 people from most of 27 Southern Baptists’ distinct Asian cultures met for the “Asian American Kickoff Gathering” Sunday (June 13) in a double-sized room at the Music City Center.

It was the first meeting of the newly formed Asian American Collective spearheaded by Peter Yanes, the SBC’s executive director of Asian American Relations and Mobilization.

“We are no longer a mission field,” Yanes told the group comprising the SBC’s eight ethnic fellowships and others. “We are a mission force.”

Asian American leaders who spoke included Dan Santiago, from the Filipino Southern Baptist Fellowship of North America, Jonathan Hayashi, who is Japanese; and Hyung Lee and James Kang, both Korean.

Ronnie Floyd, president and CEO of the SBC Executive Committee, told the group, “The Cooperative Program is the fuel to help us reach the world for Jesus Christ. …We believe we can do more together. I do know what Scripture teaches: We should be about presenting the Gospel to every person in every town, city, state and nation in the world.

“Leadership is rallying people to a better future. Southern Baptists have a better future because of Asian American partnership. How important you are in reaching every town, city, state and nation with the Gospel!”

James Kang, executive director of the Council of Korean Southern Baptist Churches in America, led in prayer for God’s guidance and strength for Floyd.

Yanes spoke of “three seeds” being planted by the gathering for the spread of the Gospel among Asians as well as all other people groups in the world. He said the Lord told him to start growing work among Asians in the United States with the existing Asian fellowships and spread out from there to all Asian churches in the Southern Baptist Convention, the Asian leader said.

“The first seed is that we want every Asian pastor, every Asian church, connected with each other,” Yanes said. The SBC in 2019 – the latest year for which complete statistical information is available – included 2,017 churches that worship in an Asian context, he said. That was 1.4 percent of the total number of churches in the SBC.

But that same year, 11.6 percent of new church plants were Asian. Of the 477 non-Anglo missionaries with the International Mission Board, 192 are Asian Americans, Yanes said.

“As God has blessed us, we are to bless others,” he said. “There are 500 to 600 languages spoken in the United States, but only 140 languages are spoken in Southern Baptist churches. We have work to do.”

The second seed being planted with the formation of the Asian American Collective is collaboration, Yanes said. Abraham Kuruvilla, of South Asian (Indian) ancestry, spoke from Genesis 27 on the disastrous results of not working together.

The family of Isaac and Rebecca was “broken by non-collaboration,” Kuruvilla said. “Non-collaboration pushes God off the stage [by people who say,] ‘We will do it ourselves.’ We want to collaborate with God and with His people no matter what the ethnicity.”

The SBC includes fellowship groups for people who worship in either the Cambodian, Chinese, Filipino, Hmong, Japanese, Korean, Laotian or Vietnamese language. New as of the formative meeting of the Asian American Collective is the Burmese Southern Baptist Network of 96 congregations.

“We were Baptist in Burma,” Hre Mang told Baptist Press. Mang is pastor of Falam Christian Church of Indianapolis, where about 210 people participate in Sunday worship in a Burmese (Myanmar) context. “We joined with Southern Baptist Convention number one because of doctrine, and number two, missions.

“Especially the Gospel is for sharing. Now I feel home here with Southern Baptists.”

Celebration is the third seed being planted during the Asian American Collective, Yanes said. Willie McLaurin, the SBC Executive Committee’s vice president for Great Commission relations and mobilization, spoke to this topic and showed a video of Asian Southern Baptist leaders talking about giving to missions through the Cooperative Program.

McLaurin later told Baptist Press he had commissioned videos showcasing African American and Hispanic Southern Baptists supporting the work of the Cooperative Program as well as the one on Asian Americans. The three videos will be shown at different times and places during the 2021 SBC Annual Meeting.

The Asian American Collective also includes a vibrant group of Americanized, second-generation Asians, consisting mostly of Millennials, those born between 1981 and 1996. This group wants to network, to build relationships and to reach, disciple and mentor Asian-heritage Gen Z Christians, those born between 1997 and 2015

There are 72 million people in the Gen Z age bracket in the United States, Shane Pruitt told listeners at the Asian American Collective. Of that number, 57 million are not connected to a local church, making them in effect an unreached people group, Pruitt said. Pruitt is the national Next Gen evangelism director for the North American Mission Board.

The Asian American Collective included the presentation of a gift plaque to Paul Kim, who had worked part-time with SBC Executive Committee as a consultant for Asian churches until he retired in late 2019. Worship was led by Clearview Baptist Church of Franklin, Tenn.