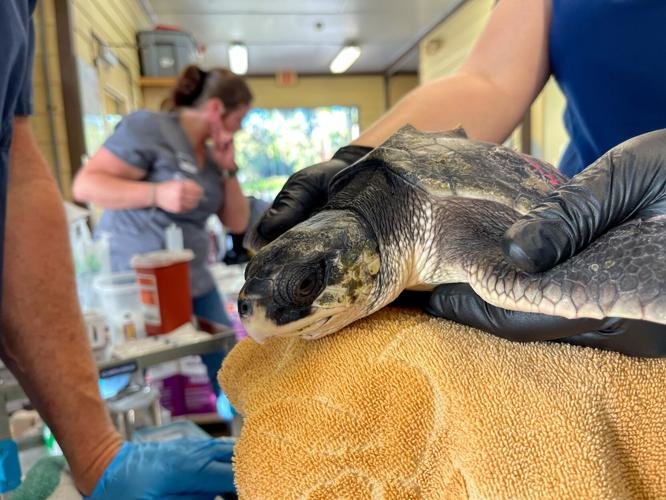 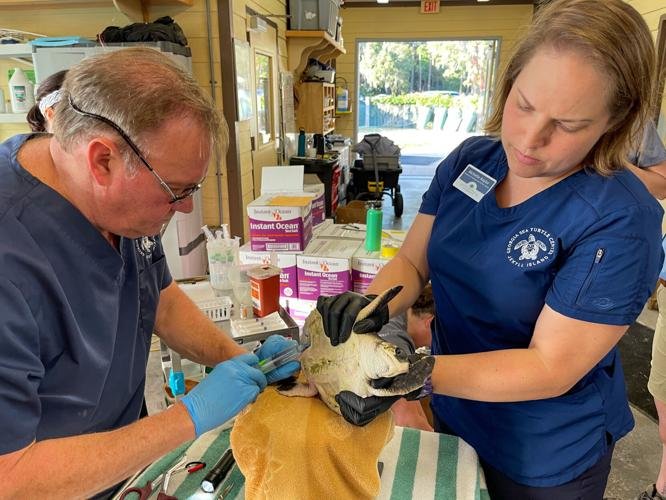 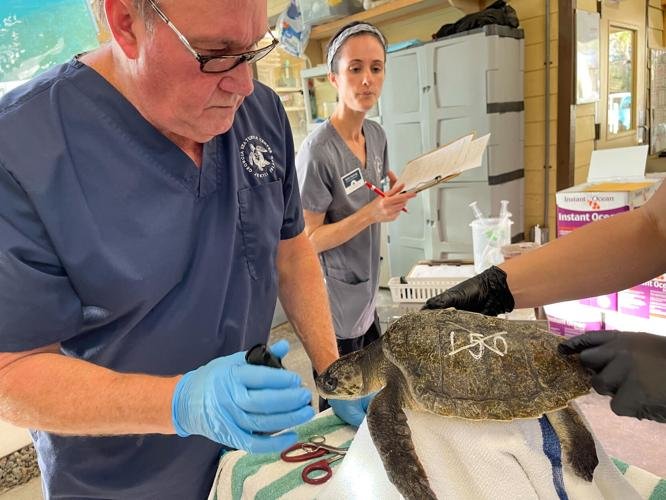 Sea turtles are beloved visitors in the Golden Isles during nesting and hatching seasons through the summer and fall.

But at the Georgia Sea Turtle Center, they are year-round guests. And during the cold winter months, many incoming patients at the sea turtle rehabilitation facility on Jekyll Island are admitted with what’s known as “cold stunning.”

“Cold stunning is like hypothermia in humans,” said Dr. Terry Norton, director of veterinary services and wildlife health at the Georgia Sea Turtle Center. “Turtles are different because they are ectothermic — cold-blooded — and depend on external heat for all of their body functions. When the temperatures drop below 50 degrees Fahrenheit, the turtles will slow down and eventually become comatose and usually wash to shore.”

When these turtles are found on the beach, he said, they can be in bad shape.

“If they make it to a rehab facility like New England Aquarium or the Georgia Sea Turtle Center, they are slowly rewarmed at 5-10 degrees per day,” he said. “Being cold also suppresses the immune system, thus the turtles are predisposed to pneumonia and bone and blood infections.”

Some turtles do not survive. Treatment normally consists of supportive care such as fluid therapy and vitamins and antibiotics, said Norton, who has worked at the center for 15 years and who recently announced his retirement.

“Blood work, X-rays and other diagnostics are often used to assist in the medical management of our cold-stunned patients,” he said. “Once the turtles have recovered, they are released off of Jekyll Island or further south if it is too cold.”

A juvenile green sea turtle was found by the Department of Natural Resources stranded on St. Simons Island on Monday evening at the 10th Street beach access. The turtle was transferred to the Georgia Sea Turtle Center.

A new event on Jekyll Island brings attention to cold-stunning and to the Sea Turtle Center’s mission. The second annual Cold-Stunned Plunge was held on Nov. 26, and more than 350 people took part in the fundraising event.

Soon after, the center received the first cold-stunned turtles of the season. The turtles were flown to Jekyll through a partnership with Turtles Fly Too.

More than 40 total turtles were transported on flights to the Atlantic Marine Conservation Society, to the South Carolina Aquarium and to the Georgia Sea Turtle Center, which received eight Kemp’s Ridleys.

“All the turtles are currently eating great and behaviorally normal,” Norton said. “A few of them have mild to moderate pneumonia, which is common in cold-stunned turtles. The turtles we received this year are in better shape than the turtles we rehabbed last year.”

The partnership with Turtles Fly Too provides a more efficient way to transport turtles from one institution to another, Norton said, and promotes collaborations that would not have happened previously.

“Turtles Fly Too is an organization that started when the Georgia Sea Turtle Center needed a flight for a sea turtle to go to another institution for permanent captive care,” he said. “We then suggested it for assisting in transporting cold-stunned turtles from New England, where they received hundreds of turtles in a very short period and needed assistance from organizations around the country.”

Pilots donate their time, planes and fuel to transport turtles.

“The New England Aquarium and the National Marine Life Center receive hundreds of cold-stunned sea turtles each winter, and we support those facilities in receiving many of those patients for care,” he said.

Events like the Cold-Stunned Plunge support the center’s work by raising funds and awareness.

“They provide an educational opportunity for components of care that aren’t as obvious to visitors learning about sea turtles,” Norton said. “A large portion of the patients treated at the center are impacted by cold-stunning in the winter months, and it’s a great way for people to become more connected to the work we do.”