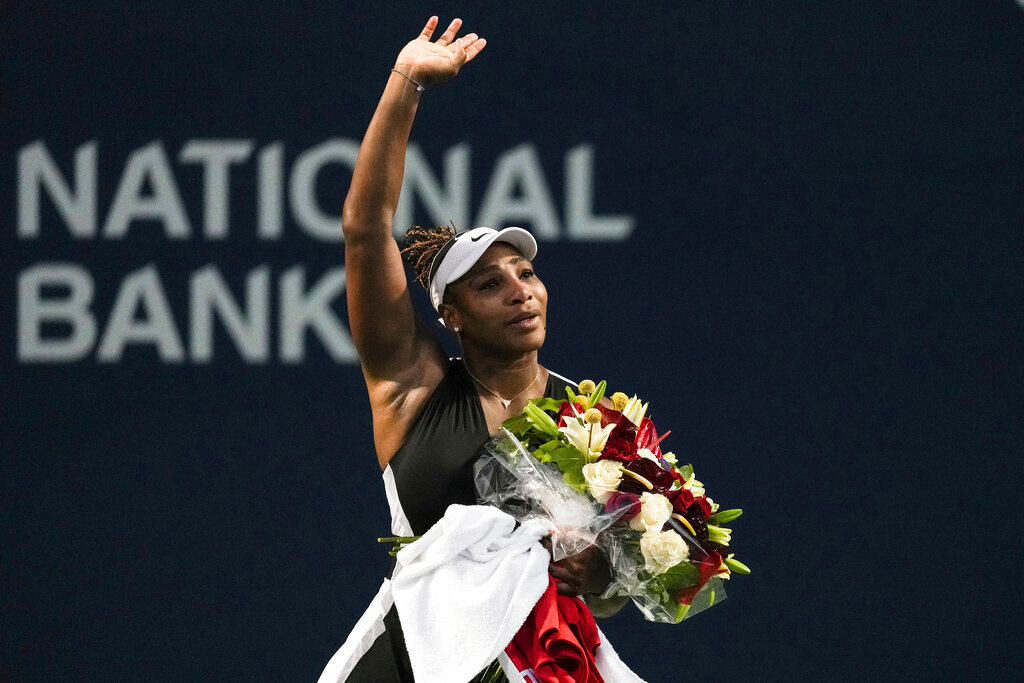 Serena Williams leaves the court carrying flowers and waving to fans after her loss to Belinda Bencic, of Switzerland, at the National Bank Open tennis tournament Wednesday, Aug. 10, 2022, in Toronto. (Chris Young/The Canadian Press via AP) 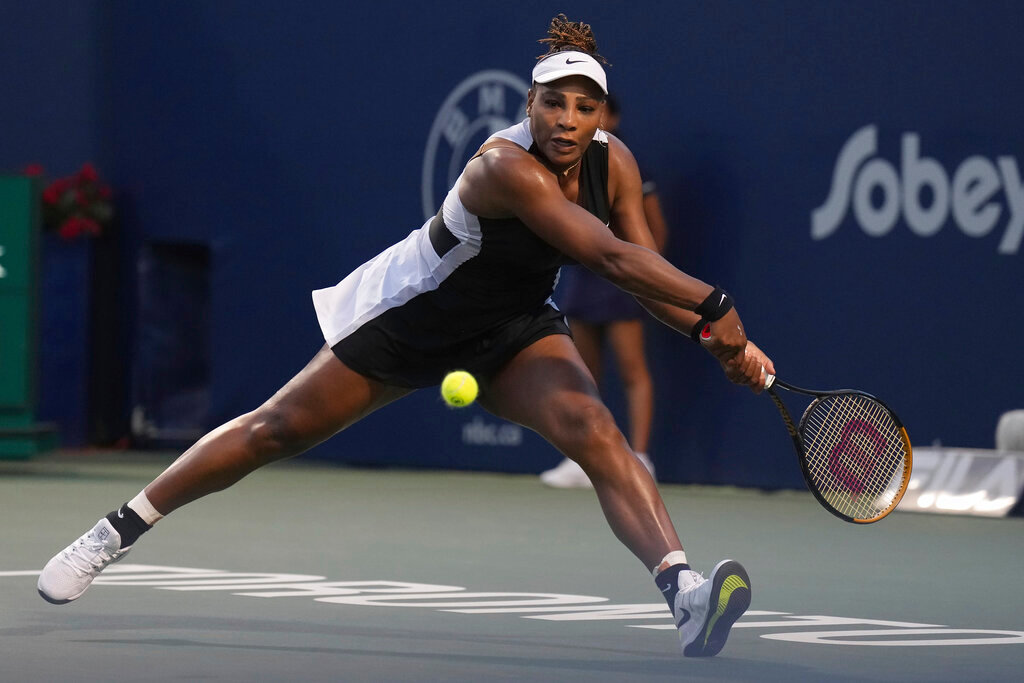 TORONTO (AP) — Serena Williams wore her game face when she stepped out into the stadium for her first match since telling the world she is ready to leave professional tennis.

Greeted by a standing ovation, the 23-time Grand Slam champion didn’t smile. She didn’t wave. She took a sip from a plastic bottle as she walked in. Some folks in the crowd captured the moment with the cameras on their cellphones. Others held aloft hand drawn signs — oh, so many signs — with messages such as “Queen” or “Thank you.”

No one knows exactly how many more matches Williams will play before she puts her rackets away for good, and the 40-year-old American exited the National Bank Open on Wednesday night with a 6-2, 6-4 loss to Belinda Bencic.

While there were some familiar fist pumps and yells of “Come on!” during the competition, it was only afterward that Williams really allowed her feelings to show, her voice shaking and her eyes welling during an on-court interview when Bencic ceded the spotlight.

“A lot of emotions, obviously,” Williams told spectators who offered her encouragement throughout the clear, 75-degree evening.

The second-round match at the hard-court tuneup for the U.S. Open came a day after she announced “the countdown has begun” on her playing career, saying she wants to have another child and pursue business interests.

She did not state precisely what her last event will be, but did make it sound as if her final farewell will come at the U.S. Open, which begins Aug. 29 in New York. Williams has won the singles title at Flushing Meadows a half-dozen times — first in 1999; most recently in 2014 — to go along with seven championships apiece at Wimbledon and the Australian Open, plus three at the French Open.

“I’m terrible at goodbyes,” she added, her hand on her chest, “but goodbye, Toronto!”

Next up on her schedule is the Western & Southern Open in Cincinnati next week, another event that serves as preparation for the year's last Grand Slam tournament.

Williams, a three-time champion in Canada, started this match, fittingly enough, with an ace. She delivered another later in that game, too, showing off the superb serve that helped her to so many match victories, so many tournament titles, and so many weeks at No. 1 in the rankings.

That elite ability showed up occasionally against Bencic, whether the trio of unreturnable serves to close out that opening game or a later putaway swinging volley accented with a shout and a tug on the brim of her white visor.

But because of a leg injury that sidelined her for the last half of 2021 and the first half of 2022, she was playing for only the third time in the past 12 months. There were signs of that, as well, and of why Williams is no longer the dominant force she was for so long.

The breaks of her serve that were never quite so frequent when she was younger and at the height of her powers. The not-quite-on-target groundstrokes. The inability to offer up too much resistance while receiving serve; she only earned one break point in the first set, missing a return long to fritter away that chance, and none in the second.

“I wish I could have played better,” Williams said, “but Belinda played so well today.”

It did not help Williams that she was facing an opponent 15 years her junior and quite talented, to boot: Bencic is ranked 12th, won a gold medal for Switzerland at the Tokyo Olympics last year and has been a Grand Slam semifinalist.

“It's always an honor to be on the court with her,” Bencic said, “and that's why I think tonight is about her.”

Bencic took home the Toronto trophy at age 18 in 2015, when she eliminated Williams in the semifinals to earn the distinction of being the youngest woman to beat a player many consider, as one homemade poster in the stands declared Wednesday, the “GOAT” — the greatest of all-time.