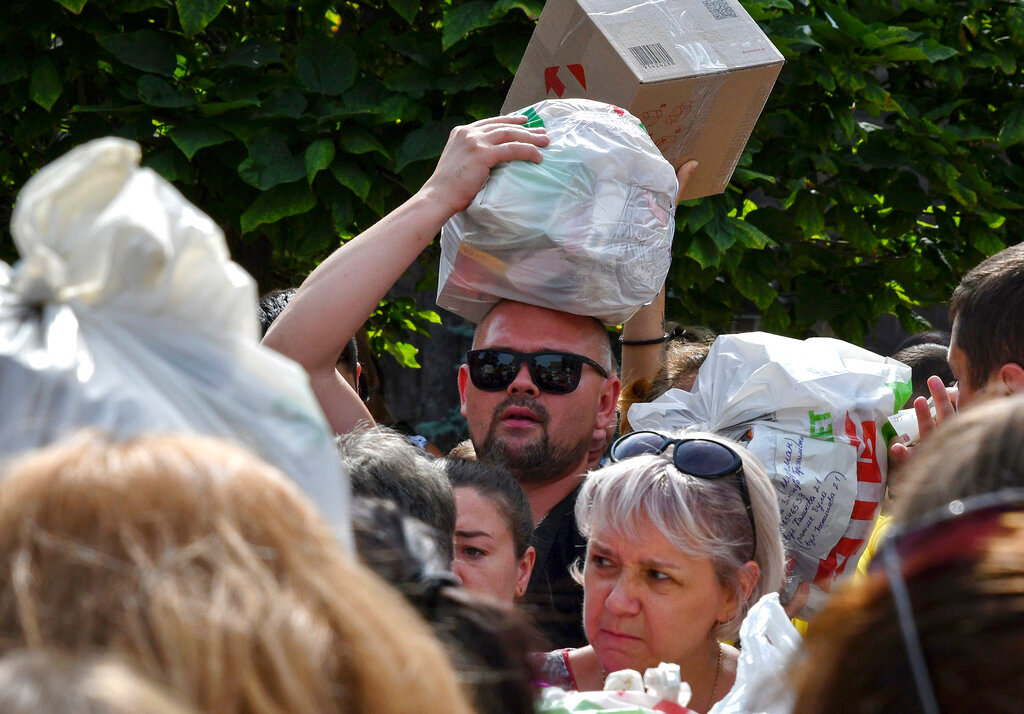 Local residents, many of whom fled the war, gather to hand out donated items such as medicines, clothes, and personal belongings to their relatives in the territories occupied by Russia, in Zaporizhzhia, Ukraine, Sunday, Aug. 14, 2022. (AP Photo/Andriy Andriyenko) 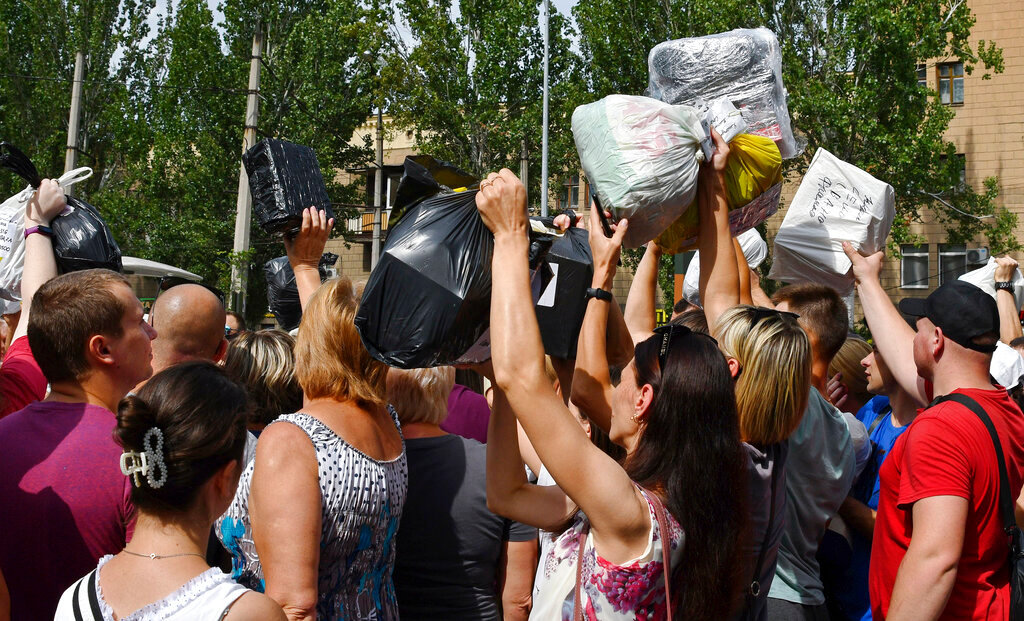 Local residents, many of whom fled the war, gather to hand out donated items such as medicines, clothes, and personal belongings to their relatives in the territories occupied by Russia, in Zaporizhzhia, Ukraine, Sunday, Aug. 14, 2022. (AP Photo/Andriy Andriyenko)
Previous Next
Posted Sunday, August 14, 2022 9:40 pm
By DEREK GATOPOULOS, Associated Press

KYIV, Ukraine (AP) — A United Nations-chartered ship loaded with 23,000 metric tons of Ukrainian grain destined for Ethiopia set sail Sunday from a Black Sea port, the first shipment of its kind in a program to assist countries facing famine.

The Liberia-flagged Brave Commander departed from the Ukrainian port of Yuzhne, east of Odesa, according to regional governor Maksym Marchenko. It plans to sail to Djibouti, where the grain will be unloaded and transferred to Ethiopia under the World Food Program initiative.

Ukraine and Russia reached a deal with Turkey on July 22 to restart Black Sea grain deliveries, addressing the major export disruption that has occurred since Russia invaded Ukraine in February.

Ethiopia is one of five countries that the U.N. considers at risk of starvation.

“The capacity is there. The grain is there. The demand is there across the world and in particular, these countries," WFP Ukraine coordinator Denise Brown told The Associated Press. “So if the stars are aligned, we are very, very hopeful that all the actors around this agreement will come together on what is really an issue for humanity. So today was very positive.”

On the front line, Russian forces fired rockets Sunday on the Mykolaiv region in southern Ukraine, killing at least one person. That region is just north of the Russian-occupied city of Kherson, which Ukrainian forces have vowed to retake. The Ukrainian emergency service said one person was killed in shelling early Sunday of the village of Bereznehuvate in Mykolaiv.

A Russian diplomat, meanwhile, called on Ukraine to offer security assurances so international inspectors could visit a nuclear power station in Ukraine that has come under fire.

As fighting steps up in southern Ukraine, concerns have grown sharply about the Zaporizhzhia nuclear power plant, which is held by Russian forces and has been hit by sporadic shelling. Both Ukraine and Russia blame each other for the shelling, which officials say has damaged monitoring equipment and could lead to a nuclear catastrophe.

Ukraine's nuclear energy operator said Sunday that one person was killed in a Russian rocket attack on the city of Enerhodar where the plant is located. The Russia-controlled local government also reported the attack and the death, but blamed it on Ukrainian forces.

Russia's envoy to international organizations based in Vienna, Mikhail Ulyanov, called on Ukraine to stop attacking the plant in order to allow an inspection team in from the International Atomic Energy Agency.

“It is important that the Ukrainians stop their shelling of the station and provide security guarantees to members of the mission. An international team cannot be sent to work under continuous artillery shelling,” he was quoted as saying Sunday by Russian state news agency Tass.

Ukraine says Russia is shelling nearby regions from the plant and is storing weapons there.