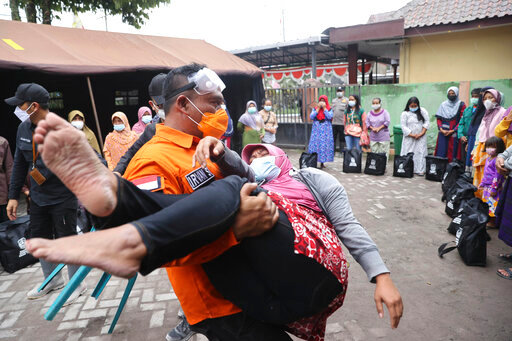 A rescuer holds a woman who fell down in a faint, after seeing her house destroyed by the eruption of Mount Semeru in Lumajang district, East Java province, Indonesia, Sunday, Dec. 5, 2021. The death toll from the eruption of the highest volcano on Indonesia's most populous island of Java has risen by a score of still missing, officials said Sunday as rain continued to lash the area and hamper the search. (AP Photo/Trisnadi)
Posted Monday, December 6, 2021 8:19 am
By NINIEK KARMINI and AGOES BASOEKI

LUMAJANG, Indonesia (AP) — Rescuers were searching for survivors Sunday on the slopes of the highest volcano on Indonesia’s island of Java after it was rocked by an eruption that killed at least 13 people, as smoldering debris and thick mud hampered their efforts.

Mount Semeru in Lumajang district in East Java province spewed thick columns of ash more than 12,000 meters (40,000 feet) into the sky, and searing gas and lava flowed down its slopes after a sudden eruption Saturday triggered by heavy rains. Villages and nearby towns were blanketed with falling ash and several hamlets were buried under tons of mud from volcanic debris.

Authorities warned the thousands of people who fled the volcano’s wrath not to return during Sunday’s lull in volcanic activity, but some villagers were desperate to check on livestock and possessions left behind. In several areas, everything — from the thinnest tree branch to couches and chairs inside homes — was caked with ash.

The debris and lava mixed with rainfall to form thick mud that destroyed the main bridge connecting Lumajang and the neighboring district of Malang, as well as a smaller bridge, said Thoriqul Haq, the district chief in Lumajang.

The eruption eased pressure that had been building under a lave dome perched on the crater. But experts warned that the dome could still further collapse, causing an avalanche of the blistering gas and debris trapped beneath it.

A thunderstorm and days of rain, which eroded and partly collapsed the dome atop the 3,676-meter (12,060-foot) Semeru, triggered the eruption, said Eko Budi Lelono, who heads the geological survey center.

He said flows of searing gas and lava traveled up to 800 meters (2,624 feet) to a nearby river at least twice on Saturday. People were advised to stay 5 kilometers (3.1 miles) from the crater’s mouth, the agency said.

Despite an increase in activity since Wednesday, Semeru’s alert status had remained at the third highest of four levels since it began erupting last year, and Indonesia’s Volcanology Center for Geological Hazard Mitigation did not raise it this week, Lelono said.

Semeru, the stratovolcano, is also known as Mahameru, meaning “The Great Mountain” in Sanskrit. It has erupted many times over the last 200 years. Still, as with other volcanoes — it is one of 129 under watch in Indonesia, the world’s largest archipelago — more than 62,000 people call Sumeru's fertile slopes home. The 3,676-meter (12,060-foot) volcano last erupted in January, with no casualties.

Officials said earlier they had hoped they could avoid casualties by closely monitoring the volcano, but the death toll quickly rose from one late Saturday to 13 on Sunday morning.

More than 900 villagers streamed into makeshift emergency shelters after Saturday’s powerful eruption, but many others defied official warnings and chose to remain in their homes, saying they had to tend to their livestock and protect their property, said Haryadi Purnomo of East Java’s search and rescue agency.

“We’ll do everything we can to evacuate them by preparing trucks and motorbikes for them to flee at any time,” Purnomo said.

He said his teams were searching for survivors and victims on the southern slope of the mountain, but thick mud, smoldering debris and heavy rain have hampered the search. He described several formerly lush villages south of the crater as “death zones.”

“There’s no life there... trees, farms, houses are scorched, everything is covered in heavy gray ash,” Purnomo said, adding that several other areas were virtually untouched. Search and rescue efforts were temporary suspended on Sunday afternoon amid fears that smoldering debris and hot ash could tumble down from the crater due to heavy rains.

Indonesian President Joko Widodo said Sunday that he instructed his Cabinet ministers and disaster and military officials to coordinate the response.