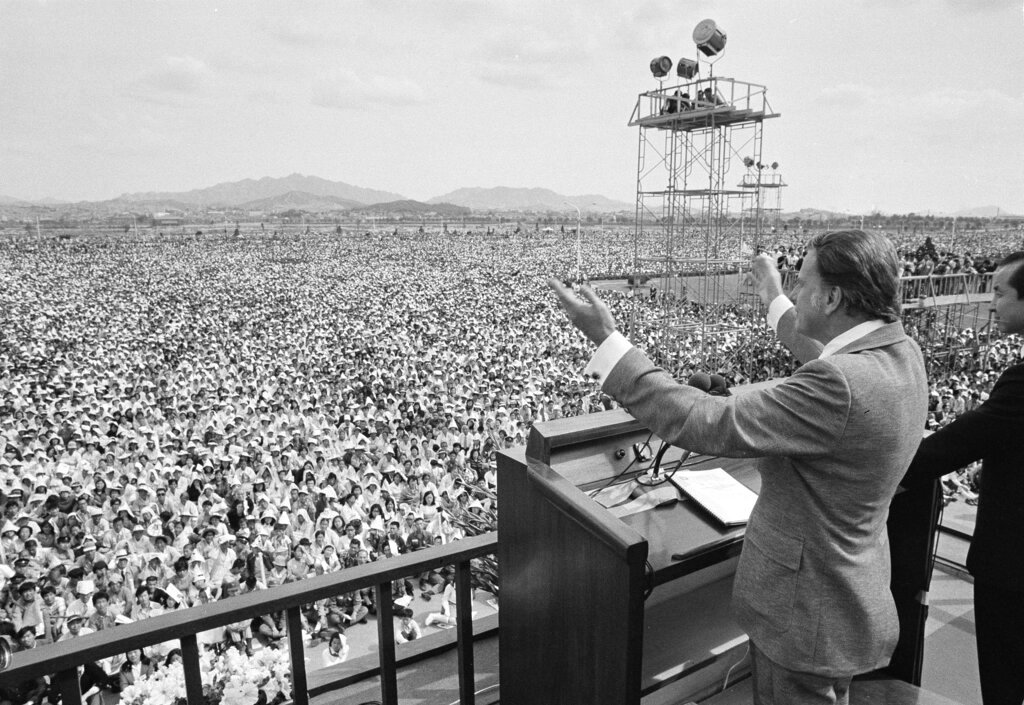 American evangelist Billy Graham preaches to over half a million South Koreans at a plaza on Yoido islet in Seoul, June 3, 1973. (AP Photo)
Posted Tuesday, May 17, 2022 1:26 pm
By ROGER ALFORD, The Christian Index

CARTERSVILLE, Ga. – Concerned about the growing secularization of America, hundreds of South Korean believers will be arriving in the U.S. next month to pray for another spiritual awakening for the nation that brought them the gospel.

“It’s time for us to repay the spiritual debt South Korea owes to America,” said Nam Soo Choi, president of the World School of Prayer, a missionary organization in Seoul.

American missionaries began sharing the gospel in Korea in earnest in the late 1800s. By 1973, when the late evangelist Billy Graham arrived in Seoul for a crusade, he encountered a people eager to hear about Christ.

Southern Korean Christians consider Graham’s crusade a spiritual turning point for their country, which moved rapidly from being nearly devoid of the gospel to becoming home to some of the largest churches in the world.

With a sense of sadness, the South Koreans have watched America decline spiritually, said Doug Small, the leader of Project Pray, an organization pushing for another “Great Awakening” in America. And that, Small said, is why they’re sending 20 prayer teams to fan out across the U.S. between June 1 and June 5.

They’ll be in major cities like Los Angeles and Washington D.C., and small towns like Cartersville, Ga., and Cane Ridge, Ky.

“I never was kicked by my grandpa’s mule, but I think, if I had been, this would hurt worse,” he said. “The truth hurts. They believe that revival is needed in America. They see America as the mother of modern Christianity around the world, and, if America fails, and we see her failing, it will affect the world. But if America saw another spiritual awakening, it would set off a seismic explosion around the world.”

Small is encouraging believers across the nation to join the South Koreans in the prayer initiative. He’s asking American pastors to open their church doors every day during the first week of June so Christians can gather to pray for revival.

David Franklin, associational missionary in the Bartow Baptist Association based in Cartersville, said God has clearly blessed South Korea in the years since the Graham crusade.

“At that time, they were one of the poorest countries in the world,” Franklin said. “People started getting saved and God broke out all over the country. Now, they’re one of the 10 largest economies in the world. And they have a heart to give back to America, because their spiritual heritage traces back to our missionaries and to Billy Graham.”
___

For more information, go to https://americasprayermeeting.projectpray.org/