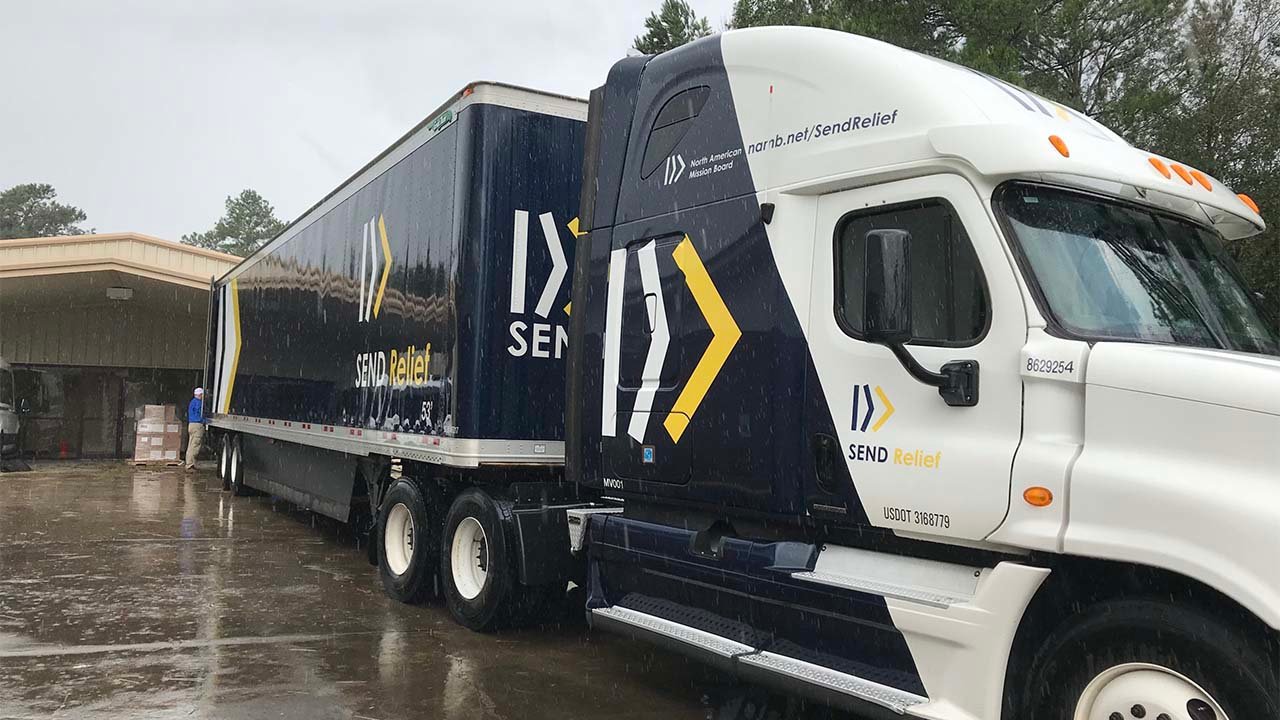 In the aftermath of Hurricane Laura, Send Relief has been dropping supplies at churches where Southern Baptist Disaster Relief will host operations for feeding and recovery activity for story survivors. On Friday (Aug. 28), Send Relief delivered supplies in Texas and Lake Charles, La., areas along the Gulf Coast that took the brunt of the hurricane. SEND RELIEF
Posted Monday, August 16, 2021 3:15 pm
Baptist Press

Crews from the Southern Baptist Convention's Send Relief will be helping in Haiti where a 7.2 earthquake on Sunday left more than 2,000 people dead.

“In the aftermath of the 7.2 earthquake that struck Haiti, Send Relief is working with local partners on the ground to assess needs,” the group announced on Twitter hours after the earthquake struck. “Join us in praying for the people of Haiti.”

SBC President Ed Litton retweeted the update from Send Relief, adding, “I am grieved over the dozens of lives lost due to the massive earthquake in Haiti. Will you join me in praying for the people of #Haiti and for our @SendRelief teams as they begin to serve and minister to those affected?”

Send Relief President Bryant Wright echoed those comments and noted at least one other factor in the recovery effort: “The infrastructure within Haiti makes this very challenging.”

Saturday’s epicenter was located on the country’s southwestern peninsula. The last time Haiti experienced a quake on this scale was Jan. 12, 2010. That one measured 7.0 and was located closer to the capital of Port-au-Prince, a densely populated area. More than 100,000 fatalities were attributed to the 2010 quake, but some Haitian authorities place the number of dead at three times that amount.

To compound the situation on the ground, the country remains unsettled after the July 7 assassination of President Jovenel Moîse and is bracing today (Aug. 16) for heavy rain from Tropical Storm Grace.

Soon after the 2010 earthquake, Roland Norris and his wife Mary helped found Baptists4Haiti. Over the years, Norris has organized mission teams to the country as the organization has maintained a consistent presence through a mission house as well as another house located on three acres. Since 2019, civil and political unrest has prevented mission teams from traveling to Haiti, but in that time the group has broadened its reach to other areas such as Belize and the Bahamas, resulting in a name change to Look to the Nations.

Eight full-time employees remain in Haiti, however. Norris, a member of First Baptist Church in St. Mary’s, Ga., told Baptist Press Sunday night that while those staff felt the earthquake, they were 100 miles away from its epicenter and personally escaped its destruction. However, several have family in the affected areas who experienced severe damage to their homes.

When praying for the Haitian people, Norris urged Southern Baptists to consider the trauma experienced by those who lived through the 2010 earthquake and have now experienced another just as powerful.

“One of my guys told me that he’s not going to sleep inside for a long time after this,” he said. “In 2010, hundreds of thousands of lives were lost, and this one was strong enough to remind them of that. Pray for peace for those who are living with that mental pain.”

Instability from the presidential assassination adds to that stress, Norris said, adding that he is praying a peacekeeping force such as the United Nations can enter the situation and bring a measure of peace.

“From what I understand, gang activity is also becoming more common in areas so that people are unable to travel freely and do what they need to do,” he said. “If this could end, it would deescalate things to where we can begin bringing teams in again.”

Jerry Chandler, the head of Haiti’s Civil Protection Agency, said at a news conference that damage was concentrated in the cities of Jérémie and Les Cayes. Those areas are less populated, but also more remote for rescue and cleanup efforts. Homes, churches, hospitals and hotels are included in the more than 13,000 buildings destroyed.