Taylor Warren, 4, part of a mission team from Eagle Lake, FL, washes cars at a free car wash at Bloom Baptist Church in Lithopolis, OH. The event was part of a series of evangelistic outreaches called Crossover 2015 in Columbus, OH. MATT MILLER/BP

ST. LOUIS (BP) — The iconic Gateway Arch represents the pathway to the west for most travelers and locals.

For Tom Breeden, St. Louis Metro Baptist Association's (SLMBA) executive director, it's also the gateway to a mission field in need of hope. That's why he welcomes the estimated 3,500 Southern Baptist volunteers who will converge on the metropolitan area June 11 for Crossover St. Louis.

The scores of travelers who constantly cruise the I-70 corridor through Missouri's largest city likely never see what Breeden sees. From the Arch to Lambert International Airport, they will pass neighborhoods unreached with the Gospel – much like major cities in foreign lands.

"We have 12 unreached areas of St. Louis that don't have a Southern Baptist church within a three-to-five-mile radius," Breeden said. "Visitors driving on the I-70 corridor will pass some of the darkest and most dangerous areas of our city."

During Crossover, volunteer teams will visit five of those areas to plant and water the Gospel. Some of those volunteers may become part of the 25 church planters and church planting partners that SLMBA hopes to recruit long-term via the evangelism outreach, Breeden said.

Mission projects along the I-70 corridor are among an estimated 75 initiatives in SLMBA seeking volunteers for music concerts, block parties, city beautification and projects designed to enhance SLMBA's growing partnership with local school districts. Most of these projects will happen around existing SLMBA churches, with each having received a grant from NAMB and the association.

To begin, but also build on what's established

"From the beginning, we have asked our churches to dream and do more than they could ask or think from God on their own," said Tom Firasek, SLMBA's ministry and partnership coordinator. "We have churches getting on board that have done very little ministry outside their church walls. 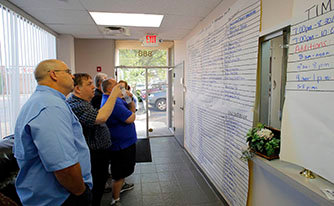 With the events of Ferguson, MO, then still fresh on their minds, St. Louis Metro Baptist Association Director of Missions Jim Breeden, far left, and Tom Firasek, a member of St. Louis’ Maplewood Baptist Church, looked over Crossover planning at the Columbus Metro Baptist Association office on the Saturday morning of Crossover Columbus in 2015. JOHN SWAIN/NAMB[/caption]

"Our churches have received a new passion to reach their neighborhoods for Christ," said Firasek, who is also serving as the local Crossover coordinator.

"Our vision is to enhance and enlarge what is already in place," Breeden said. "We focus on starting, strengthening, and sending churches on mission. That's the focus of Crossover this year."

Joel Southerland is NAMB's executive director for evangelism and their point person for Crossover. He welcomes the group of SBC seminaries that sponsors a weeklong practicum for an estimated 150 students from each of Southern Baptists' six seminaries. The students will spend half a day in class and the rest of the day engaged in evangelism, both door-to-door and event evangelism, to support local churches.

"We want Crossover to have a lasting impact on the church plants and the churches long after we're gone," Southerland said.

Send Relief compassion projects bring a new complementary dimension to Crossover this year by inaugurating NAMB's new mobile medical and dental clinics. They will serve in the Ferguson area, which gained worldwide attention following riots fueled by racial tensions in 2014. Southern Baptists have recently replanted a church there.

Other Send Relief compassion projects will include hunger and poverty relief with local churches and a construction project called Home Fire Campaign, which will check and install fire alarms, according to David Melber, NAMB's Send Relief vice president.