Stockbridge bivocational pastor begins learning another language, gets much more

STOCKBRIDGE — In his days with the maintenance department for Rockdale County Schools, Mike Thomas began to build up friendships with many of the custodians. A hitch in developing those friendships came through the accompanying barrier, though.

“At this job you come into contact with a lot of people who speak different languages,” says Thomas, pastor of Highview Baptist Church in Stockbridge. Other employees and students, he pointed out, were from Romania, Ukraine, Russia, and Cambodia in addition to many Spanish-speaking countries. According to city-data.com, four Georgia cities rank in the top 50 for residents born in Romania.

What could have become a wall, Thomas turned into an opportunity. He began to think about how he could start learning to speak with these coworkers, eventually choosing to learn Romanian. He’s far from proficient, but the effort was noticeable.

“I would be trying to teach English to a guy who was trying to teach me Romanian,” he remembers. “We’d learn short little phrases. They know I’m a pastor, so we’d talk about church and family and pray together. It gave me the opportunity to minister and open doors.” 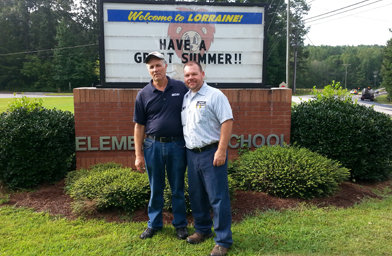 Mike Thomas, right, pastor of Highview Baptist Church in Stockbridge, stands with Mikhail Cheban, who works as a custodian at Lorraine Elementary School in Rockdale County. Cheban, from Moldova, and Thomas became friends in the Highview pastor's attempts to learn Romanian. MIKE THOMAS/Special

The chances to be together changed, as an outsourcing of jobs placed his Romanian friends in other locations. Before that, Thomas estimates he’d built friendships with up to 60 adults from other countries.

What Thomas also learned is they had more in common than he’d previously thought. Mikhail Cheban, a member of Living Waters Christian Church in Snellville and custodian with Rockdale County Public Schools at Lorraine Elementary, became a friend. From Moldova, Cheban invited Thomas to a baptismal service one weekend two years ago at Lake Lanier.

“They started on Saturday morning and went into Sunday,” he says. “The service was all about baptism. They had communion, and another fellowship with food. It ended Sunday afternoon. They make it a big deal.”

The time with fellow believers gave Thomas the chance to learn how faith can grow, even in a country hostile to it. 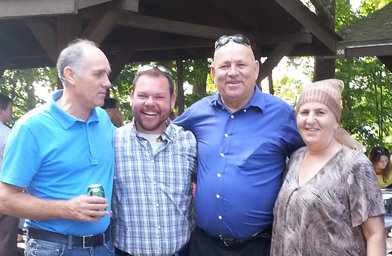 Mike Thomas stands with members of Living Waters Christian Church in Snellville at a baptismal service at Lake Lanier in August 2013. Thomas became friends with several members of the church, a non-GBC congregation, in trying to learn the language of coworkers within the Rockdale County Public School System. MIKE THOMAS/Special

“You look at Christianity in American and see the apathy of professing believers, and it’s kind of difficult to deal with,” he says. “Then, you see someone from a formerly Communist country whose grandparents were jailed for their faith and there’s a difference in them coming from a place of persecution.”

He ponders at similarities and prospects for the future.

“The culture has changed in America. Today, those who stand up for Christ and the doctrines taught in the Bible are seen as bigots. If a Bible can be seen as offensive, it can be taken away. We seem to be headed in a direction where the church is eventually going to be purged and purified because of this.”

The work ethic of his Romanian and Moldovan friends sticks out, he added. “They’re dear people, and take tremendous pride in their work. They use all resources available to get the job done instead of buying something else. They think outside the box.

“If you look at them, they can have a hard, cold, stern look about them. They wouldn’t talk because their English isn’t very good, but they appreciated me wanting to learn their language. They lit up like a Christmas tree.”