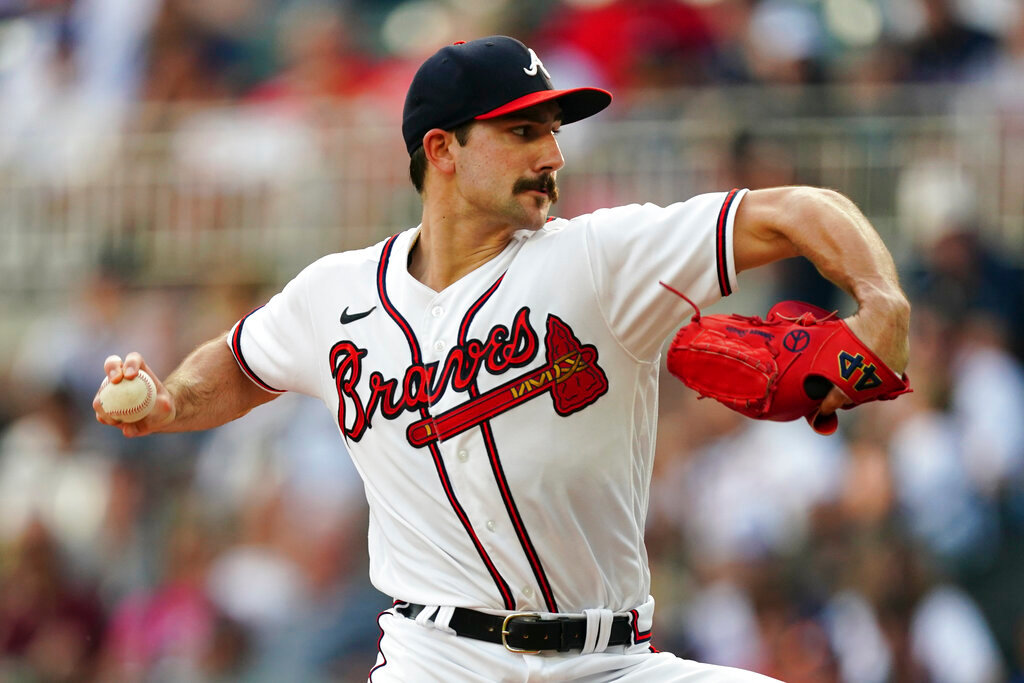 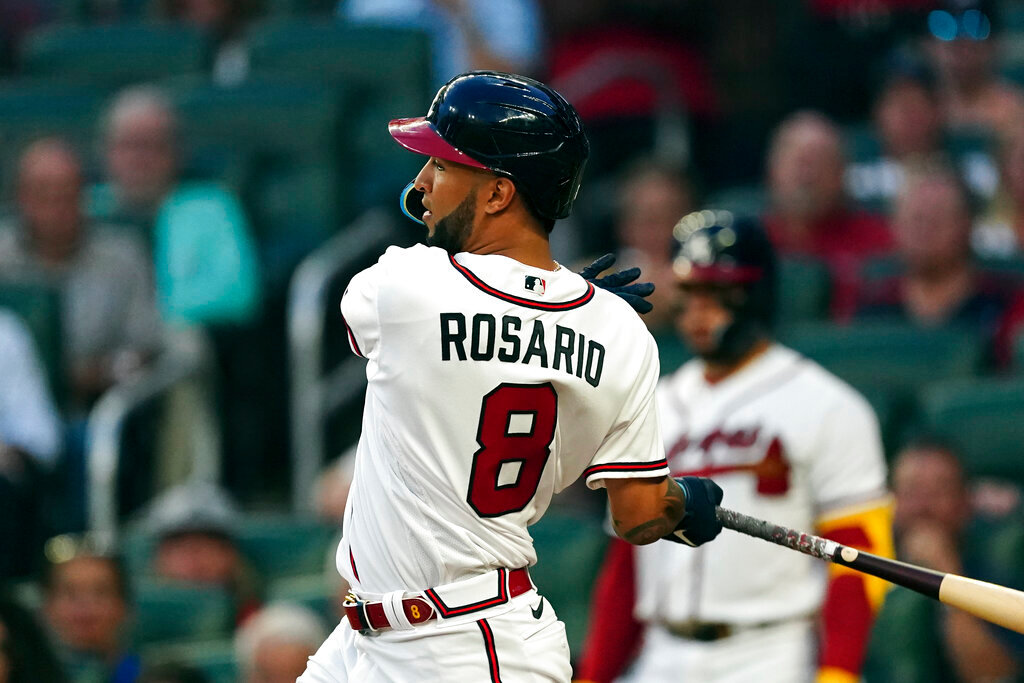 Atlanta Braves' Eddie Rosario follows through on a two-run base hit in the third inning against the Philadelphia Phillies Tuesday, Aug. 2, 2022, in Atlanta. (AP Photo/John Bazemore) 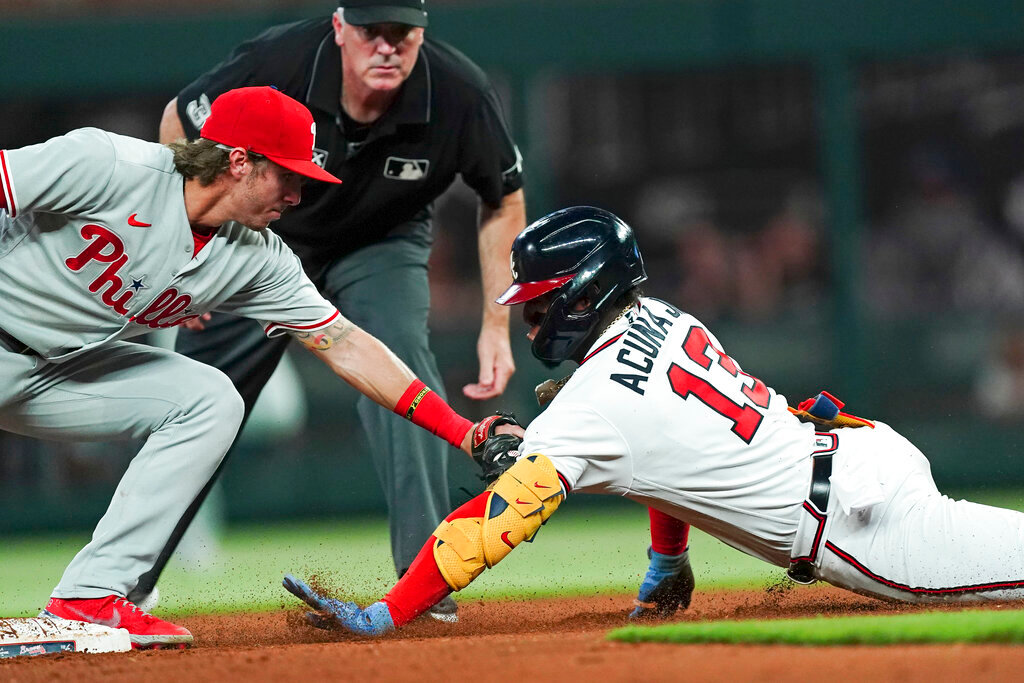 Atlanta Braves' Ronald Acuna Jr. (13) is tagged out at second base by Philadelphia Phillies second baseman Bryson Stott (5) as he tries to stretch a single in the fourth inning Tuesday, Aug. 2, 2022, in Atlanta. (AP Photo/John Bazemore) 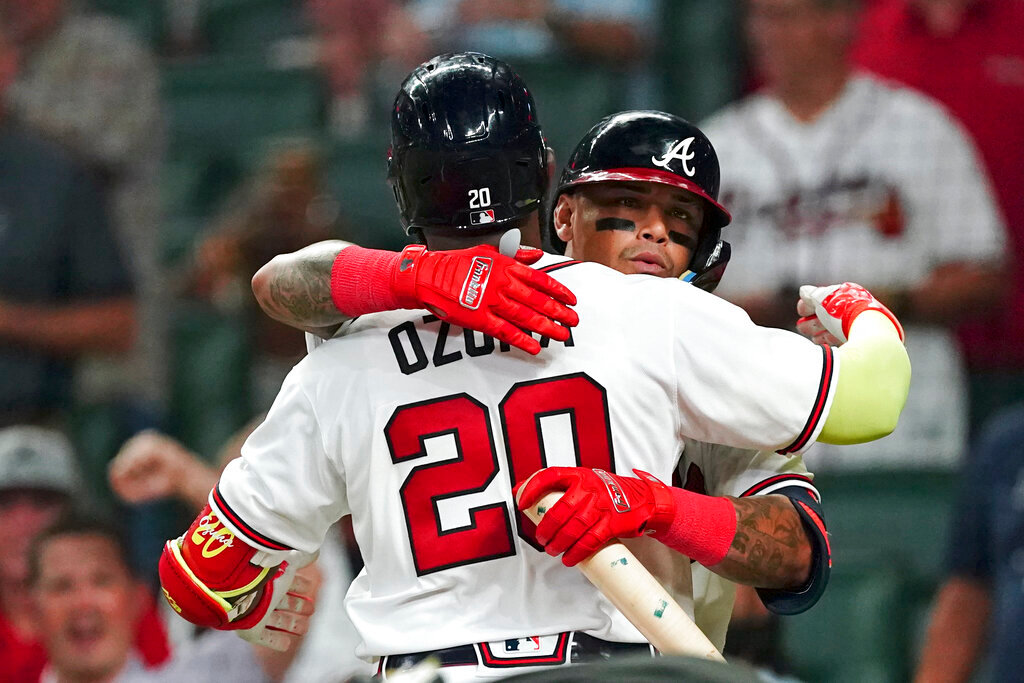 Atlanta Braves' Marcell Ozuna (20) is greeted at home plate by Orlando Arcia (11) after hitting a home run in the seventh inning against the Philadelphia Phillies Tuesday, Aug. 2, 2022, in Atlanta. (AP Photo/John Bazemore)
Previous Next
Posted Wednesday, August 3, 2022 9:34 am
By GEORGE HENRY, Associated Press

ATLANTA (AP) — Spencer Strider doesn't relish striking out as many batters as possible. His goal is simply to pitch six or seven innings and give the Atlanta Braves a chance to win.

“That's been my focus, my actual narrowed-down goal — the only thing I'm trying to do is go deep into the game," Strider said. “Just get quick outs.”

Strider struck out a career-high 13 in six-plus innings, Eddie Rosario tied a career-high with five RBIs and the Atlanta Braves beat the Philadelphia Phillies 13-1 Tuesday night for their fourth straight win.

The defending World Series champions are 40-14 since June 1, the best record in the majors over that span. They moved within 2½ games of the NL East-leading New York Mets.

Philadelphia. which dropped to 10-32 when scoring three runs or fewer, entered 34-18 since June 1, the fourth-best record in the majors over that span, and on a five-game winning streak. The Phillies were coming off an 18-hit performance in Sunday’s 8-2 win at Pittsburgh but were held to four hits by the Braves.

Strider (6-3) allowed one run and three hits. He won consecutive starts against the Phillies after beating them 6-3 last Tuesday at Philadelphia. It was the rookie’s fourth double-digit strikeout game.

Only two of his last 18 batters reached, on a walk to Kyle Schwarber in the third and a single by Darick Hall that ended Strider's night.

For a pitcher known for his high velocity, Strider was pleased to rely on more than a fastball that averaged 98.6 mph. The Phillies swung at 19 sliders and whiffed on 11 of them.

“I think a lot of what makes the slider good, and I've worked a lot metrically on it — that was sort of my focus last season — isn't necessarily movement, even though it is moving very well, but guys are on my fastball," Strider said. “They saw me last week and I think I threw like 80% fastballs. There was some purpose to that."

Schwarber credited Strider with keeping the Phillies off balance.

“He's a guy that the metrics and everything on the fastball, it's legit, it's true," Schwarber said. “Those are the things when he gets away with a mistake with a foul ball and it works in his favor.

“He's a good pitcher, but I feel like the more we can see him, the more we'll get used to it and go from there. You tip your cap. He's pitched his butt off both times he's pitched against us."

The Braves took a 2-1 lead in the third when Rosario singled off the glove of first baseman Rhys Hoskins. The ball bounced past second baseman Bryson Stott and into shallow right field, allowing two runs to score. Ronald Acuña Jr.'s RBI single made it 3-1 in the fourth.

Atlanta scored six runs in the fifth, five off Corey Knebel. Rosario drove in Matt Olson on a double into right-center. William Contreras beat out an infield single, and Rosario scored on a wild pitch. Contreras advanced on the wild pitch and scored on Marcell Ozuna’s single.

Orlando Arcia followed with his sixth homer, a two-run shot, for an 8-1 lead. The Braves batted around as Dansby Swanson singled to drive in another run.

“It was a good night for the whole team," Rosario said. “Everyone contributed, and it was a good team win."

The Phillies went up 1-0 in the second on Hall’s RBI double that glanced off Olson’s glove at first and bounced down the right-field line.

Ozuna hit his 19th homer to make it 10-1 in the seventh. Rosario drove in a pair of runs in the eighth with a single.

Rosario has faced a long road back after missing 62 games with blurred vision and a swollen right retina.

“I feel great," Rosario said. “I felt good at home plate and did the things to help us win."