NASHVILLE (BP) — Before a divorce, churchgoers in troubled marriages look a lot like their happily married counterparts at church – participating, serving and leading at similar rates, a new study shows. 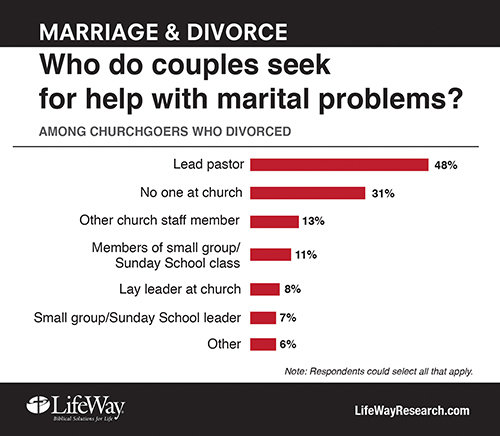 Yet pastors may have difficulty helping couples save their marriages, because churchgoers on the brink of separation often keep quiet at church about their marital woes.

The research points to a problem with church culture, said Scott McConnell, LifeWay Research vice president. If couples are unwilling to discuss marital struggles at church, they don't get the help they need.

Many couples also may not realize help is available. While most pastors say their churches offer counseling referrals and other marriage aids, fewer churchgoers agree.

"Either pastors are overstating what they're doing or not everybody is noticing what their church is doing," McConnell said. "There are clearly gaps in communication when people don't even know help exists."

Divorce in the church

Divorce is a widespread issue for Protestant churches. Forty percent of pastors say at least one couple in their church separated or divorced in the past year.

Yet among regular churchgoers – those who attend once a month or more – church involvement offers few clues to distinguish troubled marriages from healthy ones. Three months before their separation, 7 in 10 regular churchgoers who divorce are attending church once a week or more. For those in healthy marriages, the rate is 87%. 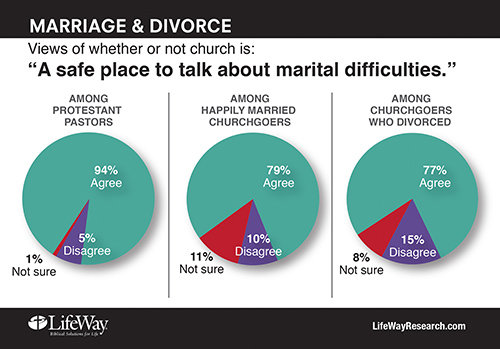 The two groups also report similar levels of involvement in small groups at church (46% for those who divorce vs. 41% for those in healthy marriages), serving in community ministries (34% vs. 31%), and positions of responsibility at church (39% vs. 45%).

"Many of the people who end up divorcing are average churchgoers," McConnell said. "You're not always going to see it coming."

He noted one exception – regular churchgoers whose spouses do not attend. Eighteen percent of those who divorced say their former spouses never attended church three months before their separation. In contrast, just 2% of those in healthy marriages say their spouse never attends.

"It is courageous and often uncomfortable for a married individual to attend church alone, but it is also an indicator they're going two different directions in their lives," McConnell said.

After divorce, 8 in 10 still look like average churchgoers. They may switch churches, but they're as involved as ever.

Twenty percent, though, no longer attend church – and the loss among their children is even higher. Among those with children who attended church before the separation, 35% say at least one child no longer attends.

Nearly half of those who divorce (47%) leave the church they attended before their separation. Rarely will former spouses remain at the same church after a divorce (10%), McConnell said. He suggested helping spouses find new places to worship so they don't step away from church entirely.

A third of those who divorce (32%) say they give less to their local church than they gave before their separation. More than a quarter of this group stops giving at all. 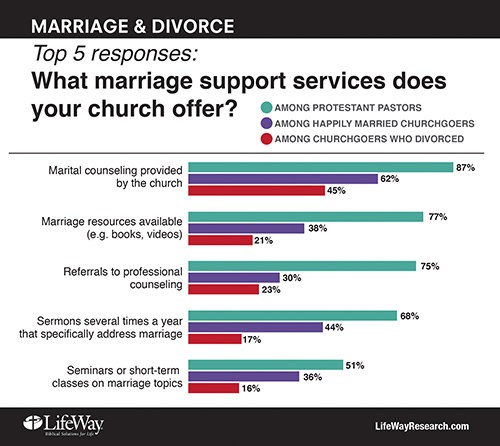 Pastors say the repercussions of divorce affect others as well. Thirty-one percent say divorce has fractured other relationships in the church, and 16%say it created leadership voids. About 1 in 10 say divorce has hurt the church's reputation (11%), halted its momentum (10%), or disbanded an adult small group or Sunday school class (9%).

"The vast majority of churches do not have an effective marriage ministry," said Greg Smalley, vice president of Focus on the Family. "In fact, most pastors are so busy doing other things, they often don't consider the negative impact failed and mediocre marriages have on the mission of their church.

"The church should be the number one distribution center for healthy marriages because of its unique role. Eighty percent of marriages began in church, giving the church a unique opportunity to build a relationship with couples that can last throughout their marriage."

Nearly 8 in 10 churchgoers – and 94% of pastors – say their church is a safe place to talk about marital difficulties.

Experience, however, tells a different story. Among those who divorced, only 48% discussed their marriage problems with the lead pastor. Even fewer talked to anyone else, such as another staff member (13%) or a member of a small group or Sunday School class (11%).

Thirty-one percent told no one – a troubling sign of church culture, McConnell said.

"If churches are dogmatic and not realistic about relationships, then those who have trouble in their marriage are never going to tell anybody," he said. "That's a wake-up call to the church."

Pastors say their churches offer a wide range of marriage support services, including resources such as books and videos (77%) and referrals to professional counseling outside the church (75%).

Churches can be more effective by being more proactive, McConnell said. He pointed out that two-thirds of pastors say their church has no lay leader responsible for marriage ministry, and 43% have no written plan.

"As much as churches already do things to help with marriage, there is still a huge opportunity to do more and to do it better," he said. "I think the typical pastor would check the box and say, 'We're already doing this.' And yet when we look deeper, there's so much more that could be done."

Deeper involvement by churches is critically important, Smalley said. "While the impact is not always immediate and obvious, nothing can negatively affect a church's ministry and mission, and thwart future health, more than hurting marriages and divorce."