BCM summer missionary McKinley Hopkins, right in red shirt, and Erin Henry, left with green wrist band, listen as a young camper shares during a morning Bible study outside their cabin. They are among 172 student summer missionaries serving worldwide this summer through Georgia Baptist Collegiate Ministries. JOE WESTBURY/Index
SHINGLETOWN, CA — The cool morning air is suddenly broken by the hearty singing of choruses and laughter as the morning worship service gets underway. The 45 acres of Elevate Camp, 10 minutes from Lassen Volcanic National Park in northern California, soon comes alive. Here, worship services, athletic games, Bible study, and one-on-one counseling sessions take place as youth seek God’s direction. Summer camp is traditionally when lifelong decisions are made for Christian service. It's a time for a profession of faith, of commitment, or rededication. It’s a time for being alone with one’s thoughts and God in the stillness of a wooded setting. Therefore, it's a place far removed from the habits and interruptions of life at home. 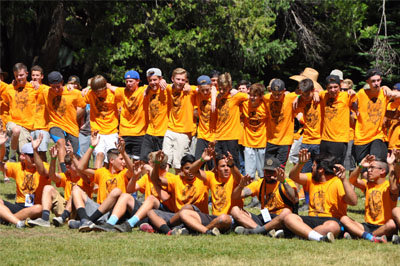 Elevate Camp has distinguished itself as having a strong evangelism focus blended with group activities that shows Christians know how to have fun. JOE WESTBURY/Index

A relationship for a lifetime

Georgia Baptists – through volunteers provided through Baptist Collegiate Ministries – play an important role in staffing these camps. Here, children and youth can develop a spiritual relationship that will last a lifetime. The camps are one of numerous options available through the BCM Send Me Now summer ministry program. After the morning worship service ends on this late July day, campers return to their cabins for a time of Bible study and sharing of prayer requests. McKinley Hopkins – a sophomore at the University of Georgia in Athens and member of Welcome Hill Baptist Church in Dalton, and fellow cabin leader Erin Henry of UGA and member of North Metro First Baptist Church – gather the campers on the open air porch with open Bibles.

The lesson on trusting God doesn’t take long before concerns begin to surface. Hopkins and Henry listen to the hidden pain carried by those in their care. One young girl says she has been praying every day for an opportunity to see her father. 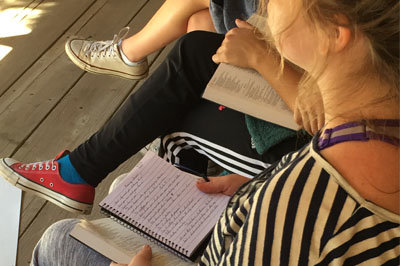 Bible study is an important part of summer camp. JOE WESTBURY/Index
“I haven’t seen him for five years because he’s in prison but I really love him and miss him,” she says in a somber tone. She shares that she is optimistic her prayer may be answered because he is being transferred to a inmate medical facility closer to where she lives. “I might be able to visit him,” she says with a guarded optimism. Another confesses with a chuckle a certain stubbornness with which she struggles. Consequently, those sitting around her share her problem with a few chuckles and agreements of their own. And so the confessions begin. They continue through the day as opportunities appear between counselor and counselee.

Giving their summer to others

Such encounters are the reasons BCM volunteers give up their summer jobs in more lucrative secular environments. Instead of waiting tables, managing fast-food counters, or working as salespeople in mall department stores, they serve in ministry setting. They could be padding their bank accounts for fall semester tuition. But, they're helping to mend hearts and build spiritual foundations. For some of them, it's just as they experienced themselves from volunteers at summer camps a decade or more earlier. 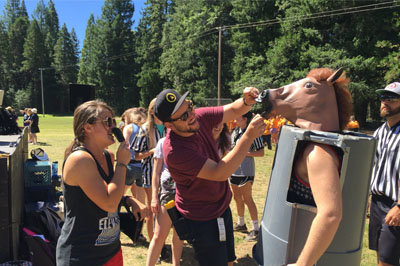 A BCM summer missionary interviews a horse at one of the many competitive events at Elevate Camp. JOE WESTBURY
“One of my gifts is evangelism so I was heartbroken when my first choice of serving in Indonesia was not available," admits Hopkins. "There is so much darkness there and people need to hear the gospel, but this experience showed me everyone needs Jesus, not just those in Third World countries. “I am so glad to be serving here this summer. I can point people here to Christ just as well as anywhere in the world.” Hopkins and Henry were among six summer missionaries Georgia provided for this year’s camp experience at Elevate Camp. That group included three previous collegians who returned on their own sponsorship rather than through BCM. The camps lasted for six weeks and averaged 300 campers from sixth grade through high school.

The great outdoors as an evangelism tool

Scott Alexander and Jeff Breshears founded Elevate Camp to use the outdoors as an evangelism tool. Alexander, son of a California Baptist pastor, saw the influence camping made on his life. So, he wanted to be sure the next generation had that same opportunity. 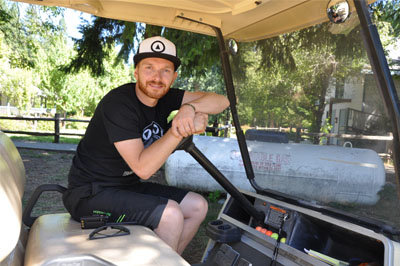 Camp co-founder Scott Alexander, son of a California Baptist pastor, thanks Georgia Baptists for sending such high quality summer missionaries to help staff the Northern California camp. JOE WESTBURY/Index
While not a camp owned by the state convention, it has strong California Baptist ties. Due to its location, the camp draws from churches in northern California, southern Oregon, and Nevada. It sprawls across 43 acres of dense forest and features a large activity field and two lakes. In its first four weeks this summer nearly 100 professions of faith were recorded. Those included a camp for underprivileged, unchurched campers provided through donations of others. This year 25 of the 40 campers accepted Christ. Costs of about $300 a week are kept to a minimum to make the experience as affordable as possible. Other events, such as winter camp and an overnight high-energy outing after an NBA game, are at the website.

Gaining experience for a lifetime

Kenneth Brock, who attends UGA and Riverside Baptist Church in Colvert, is using his summer camp experience to gain experience for his career. 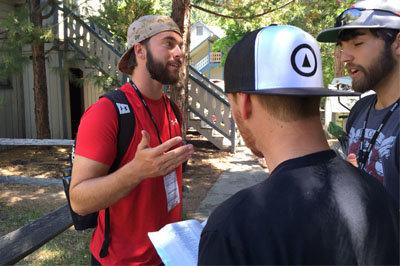 University of Georgia-Athens sophomore Kenneth Brock, left, believes BCM is a vital part of his academic and spiritual development at college. JOE WESTBURY/Index
The business management major will use his degree to shore up his ministry. Recently called as youth pastor at Riverside, he's getting ideas to incorporate into that ministry. “Elevate does a really good job in sports evangelism and this is good field experience for me. And, my business degree will help me be a good manager of financial resources when I possibly enter the pastorate after seminary. “Baptist Collegiate Ministries is also big on discipleship and the idea of multiplication … making disciples who make disciples who make disciples,” he says. “Between my college degree, summer missions experience, seminary, and BCM I feel I am getting the right foundation for ministry that I need.”

Alexander, one of the co-founders of Elevate Camp, said that maturity is exactly why he prefers summer missionaries from Georgia. 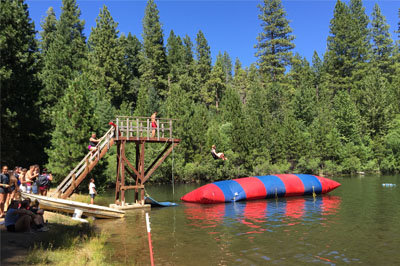 Elevate Camp believes a hearty dose of fun leads to a well-balanced Christian life. JOE WESTBURY/Index
“The blessing Georgia BCM has been to our ministry for the past couple of years is amazing, a real answer to our prayers. I don’t know where we would be without quality students from quality churches, giving our campers quality experiences. It all works together. “These students love the Lord, are of the highest integrity, and are hard working. You can tell they have been discipled and have developed leadership skills in their BCM groups.”