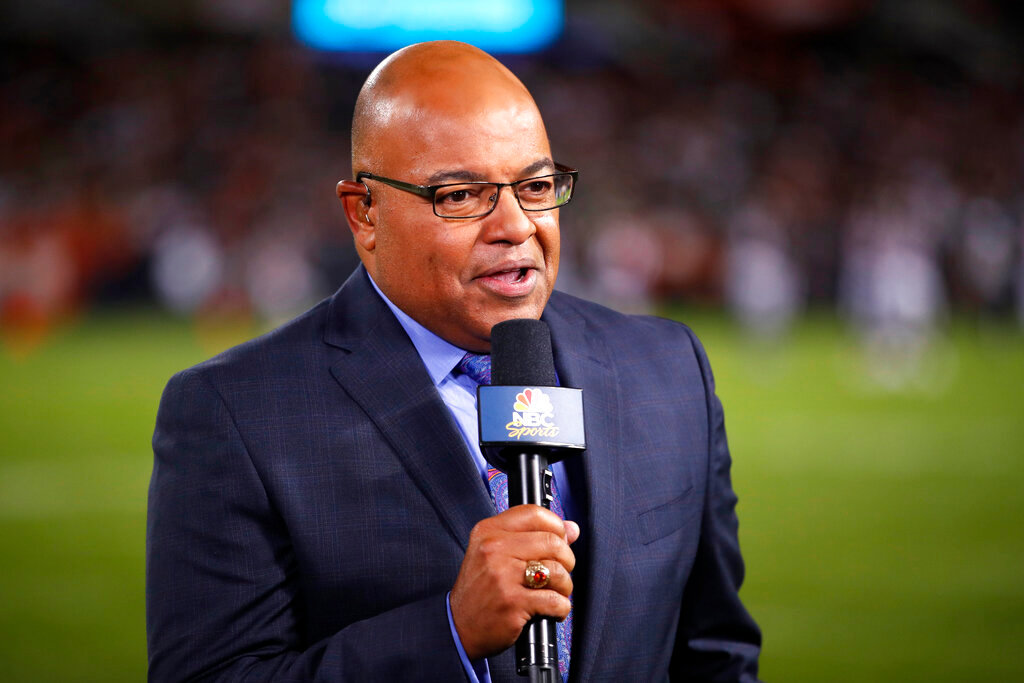 FILE - In this Sept. 5, 2019, file photo, NBC sportscaster Mike Tirico works the sidelines during an NFL football game between the Green Bay Packers and the Chicago Bears in Chicago. Tirico is one of many announcers who has had to trade the press box for a home office. (AP Photo/Jeff Haynes, File)
Jeff Haynes
Posted Sunday, February 6, 2022 7:33 pm
By JOE REEDY, AP Sports Writer

Super Sunday has morphed into Super Gold Sunday for NBC.

Next Sunday’s matchup between the Los Angeles Rams and Cincinnati Bengals will mark the first time a Super Bowl and Winter Olympics are taking place at the same time. CBS was scheduled to have this year’s game, but in 2019 agreed to a trade with NBC. CBS had last year’s game, giving it two Super Bowls in three years.

The trade made sense for many reasons. NBC was able to pair Super Bowl and Olympic spots for advertisers, while CBS will not worry about going up against the Olympics.

“We’ll have that 100 million-plus audience from a Super Bowl, and we’ll segue right into great live Olympic coverage back in Beijing. To me, that’s an unbelievably, really unparalleled and never before seen one-two punch,” Bevacqua said. “I think from a sales and marketing perspective, it’s an absolute home run.”

NBC has sold all of its spots during the game, with only a couple spots remaining for pregame. Dan Lovinger, NBC Sports’ executive vice president for advertising sales, said rates are up nearly 20% compared to the last time they had the Super Bowl in 2018. Some 30-second spots went for $7 million.

Lovinger credited a variety of factors for the robust sales.

“I think first the NFL has never been stronger, particularly in comparative terms. If you’re looking to reach 100 million people in an evening, there’s only one place you can go, and that’s the Super Bowl,” he said. “I think second is the economy, and it seems to be on pretty stable footing. You’ve got great consumer confidence, and what we’ve learned is that when consumers consume, advertisers advertise.

“But the third thing, which is the really interesting thing, is the impact of COVID and how advertisers have learned to adapt to it. Marketers are finding a way through it and we’re seeing categories that sat out last year come back, like studios. We see new categories like legalized sports betting, cryptocurrency, and some streaming platforms come in, and then you’ve got your old standbys (autos, beverages). So, it all adds up to a really strong market for the Super Bowl.”

NBC executives have promoted this as a “once in a lifetime” day. However, it is about to become a common occurrence. When the NFL’s 11-year television contract starts in 2023, NBC’s spot in the Super Bowl rotation lines up the same year as the Winter Olympics.

If the league remains on its 17 games over 18 weeks regular-season schedule, the 2026 Super Bowl will take place on Feb. 8, the first weekend of the Milano Cortina Games.

Next Sunday beginning at 8 a.m. ET with four hours of Olympics coverage before the Super Bowl programming kicks off at 12 p.m. Following the Super Bowl postgame, which is likely to be around 10:30 p.m., NBC will return to Beijing for ice dance and the new monobob (one-woman bobsled) competition.

By the time NBC signs off with the Prime Plus show from Beijing, there will be nearly 18 consecutive hours of coverage between the Super Bowl and Olympics.

Tirico will be doing double duty. He will fly from Beijing to Los Angeles for Friday’s Olympic prime-time show. He will have a location outside of SoFi Stadium throughout the weekend to host the Olympics and the Super Bowl pregame.

This is Tirico’s third Olympics as the prime-time host after joining NBC in 2016, and his fourth Super Bowl (the previous three were with ABC).

“They’re both dream assignments, so who needs to sleep at that point? The one thing you want to make sure is you can do it the right way,” Tirico said. “I think from an editorial standpoint, we’ll still be able to deliver the same coverage and that’s got to be at the forefront of this. And in some ways, I think it will help enhance this unique weekend to be at the Super Bowl site, as we’re part of that buildup during our coverage of the Olympics.”