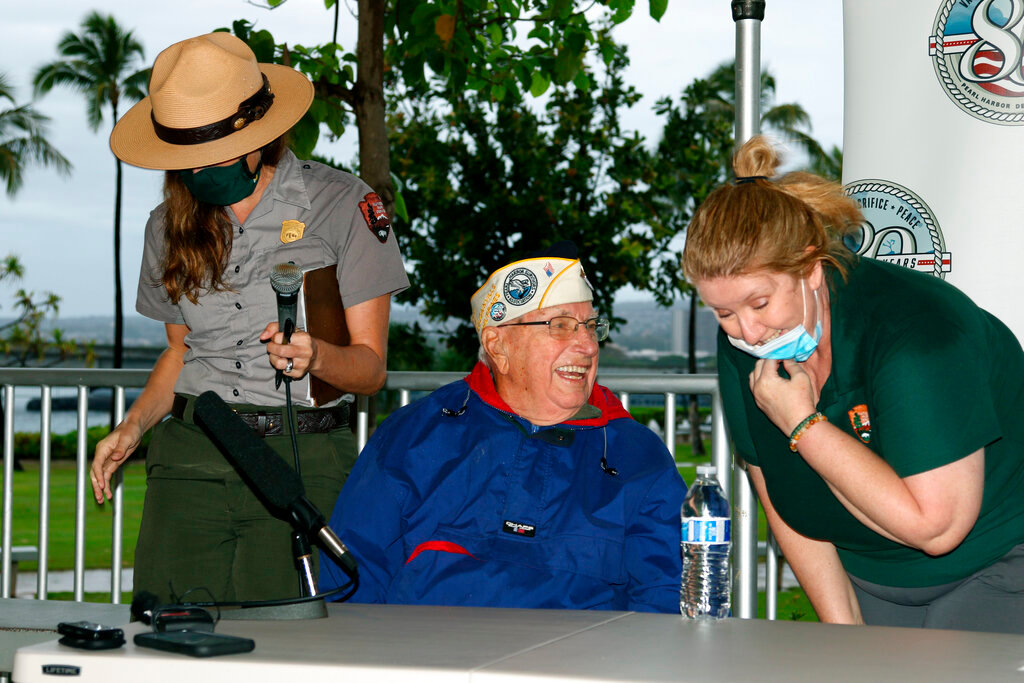 Pearl Harbor survivor Herb Elfring, center, speaks with National Park Service workers in Pearl Harbor, Hawaii on Sunday, Dec. 5, 2021. A few dozen survivors of Pearl Harbor are expected to gather Tuesday at the site of the Japanese bombing 80 years ago to remember those killed in the attack that launched the U.S. into World War II. (AP Photo/Audrey McAvoy)
Audrey McAvoy
Posted Tuesday, December 7, 2021 10:26 am
By AUDREY McAVOY, Associated Press

PEARL HARBOR, Hawaii (AP) — A few dozen survivors of Pearl Harbor gathered Tuesday at the site of the Japanese bombing 80 years ago to remember those killed in the attack that launched the U.S. into World War II.

“It was just plain good to get back and be able to participate in the remembrance of the day,” Elfring told reporters over the weekend.

Elfring was in the Army, assigned to the 251st Coast Artillery, part of the California National Guard on Dec. 7, 1941. He recalled Japanese zero planes flying overhead and bullets strafing his Army base at Camp Malakole, a few miles down the coast from Pearl Harbor.

Elfring, who lives in Jackson, Michigan, said he has returned to Hawaii about 10 times to attend the annual memorial ceremony hosted by the Navy and the National Park Service.

About 30 survivors and about 100 other veterans of the war were expected to join him this year.

They observed a moment of silence at 7:55 a.m., the same minute the attack began decades ago. Navy Secretary Carlos Del Toro was the keynote speaker.

The bombing killed more than 2,300 U.S. troops. Nearly half — or 1,177 — were Marines and sailors serving on the USS Arizona, a battleship moored in the harbor.

Several women who helped the war effort by working in factories have come to Hawaii to participate in the remembrance this year.

Mae Krier, who built B-17s and B-29s at a Boeing plant in Seattle, said it took the world a while to credit women for their work.

“And we fought together as far as I’m concerned. But it took so long to honor what us women did. And so of course, I’ve been fighting hard for that, to get our recognition," said Krier, who is now 95. "But it was so nice they finally started to honor us.”

This year's ceremony takes place as a strong storm packing high winds and extremely heavy rains hits Hawaii, flooding roads and downing power lines. Navy spokesperson Brenda Way told The Associated Press in an email Monday that she has heard of no discussion of canceling the event because of the storms.