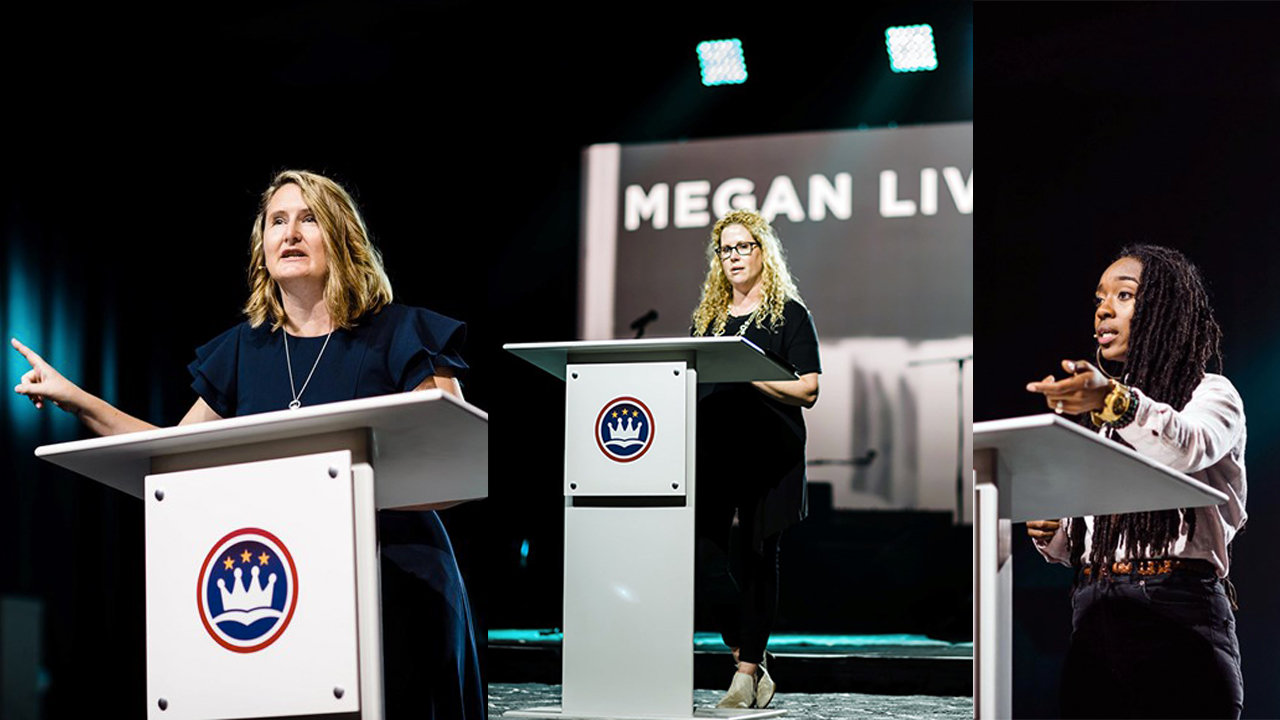 GRAPEVINE, Texas (BP) — Survivors of sexual abuse shared their painful stories and urged churches to care for the survivors in their midst at a Southern Baptist-sponsored national conference Oct. 3-5.

The survivors' personal stories came during "Caring Well: Equipping the Church to Confront the Abuse Crisis," a conference hosted by the Ethics & Religious Liberty Commission (ERLC) in partnership with the SBC Sexual Abuse Advisory Group. The event — the ERLC's sixth annual national conference -- sought to educate churches about abuse prevention and ministering to survivors.

The more than 1,650 registered attendees and a Livestream audience heard a "survivor story" from each of four women, as well as explanations of their abuse and its effects from other speakers in the main sessions. Here is a summary of the "survivor story" of those four in order, plus that of another speaker, Mary DeMuth:

— Georgia Baptist Susan Codone, senior associate dean of academic affairs at Mercer University School of Medicine, shared about her abuse as a teenager by first her youth pastor, then her pastor in a church in the Birmingham, Alabama, area.

She "knew no one would believe" her regarding the youth pastor and pastor, Codone told the audience in explaining her decision not to report them. "I thought what had happened was my fault. They told me that I had brought down men of God.

"My abuse ended when I was 16 years old, but the effects have continued throughout my life."

For her, the effects have included a sense of depression throughout her life and the collateral damage to her husband and children as a result, Codone said.

"[M]y faith has fluctuated over the years, and my service to has been interrupted by my inability to trust Him completely and to trust the church completely," she said. "The church must do a better job of being a place of healing and refuge."

She offered 10 requests to churches, including: "Understand that what might look like spiritual apathy to you is really spiritual disconnection because of trauma, and respond accordingly."

"I am a hopeful survivor," Codone said.

— Megan Lively, a social media specialist, described her ordeal after being raped while a student at a Southern Baptist seminary.

When she reported it to the school administration, Lively was "belittled by leaders to whom I had come for protection" and "made to feel as if what happened was my fault," she said. "The day I reported what happened to me I was seen as a problem to be dealt with rather than a child of God who had been sinned against. I was seen as someone threatening an institution rather than as a sister of Christ."

Lively did not share about her rape with anyone else until 15 years later, she told the audience. Her husband, pastor and the new seminary administration supported her when she disclosed the assault in 2018. She continues to be "cared for by the institution that I was convinced had failed me," Lively said.

Although she identified neither the seminary nor the administrators, Lively attended Southeastern Baptist Theological Seminary in Wake Forest, North Carolina. Her rape occurred during the administration of Paige Patterson. Danny Akin is now president. She graduated from the school with a master's degree in May.

Physical pain, flashbacks, and insomnia have been among the effects of her rape, Lively said. "[I]t may be helpful to know survivors inside and outside the church walk through life with an incredible amount of internal fear, anxiety and insecurity.

"We must join together against this enemy and draw near to the One who has already crushed his head," she said. "Jesus has won. I am His."

— Jackie Hill Perry, a speaker and recording artist, told about the sexual abuse she suffered at the hands of a 16-year-old boy as a first-grade student.

"It was not merely that a teenage boy did something to me when I was little," Perry said. "That's far too abstract.... It was that I was molested and violated by an image bearer who did not see me as one.""[I]t became a secret because to tell someone, I thought, was to implicate myself in an act of doing something that ought not be done," she told attendees. Finally, at 14 years of age, she was able to call it by name, she said -- sexual abuse.

She said, "Trauma makes you inquisitive, you know. It makes you doubt everything and everybody.

"At this point, heaven is my ultimate hope of healing," Perry said. "In heaven, there will be a man that has never take advantage of me, a man that has always used His power to serve.... Jesus is healing me, and Jesus will heal me.

"Yes it hurts still, but what has happened to me or us won't hurt forever. Trauma will not have the final say. Jesus will."

— Jennifer Michelle Greenberg, a writer and music artist, shared about her early life with an abusive father.

As a young girl, she would find pornography saved to the desktop of her computer, Greenberg said. She recalled once sitting down to write a book report and, when she noticed her father was watching from the doorway, wondering what she would find on the screen when she opened the computer. A girl who looked kind of like her and a man who looked kind of like her father appeared, she said.

As a teenager, she overheard comments her father made to her mother, and she "understood that my dad was a sexual predator, and that I — as he put it — I was a piece of meat," Greenberg said.

When she was 15, as she contemplated suicide, she prayed. "In the darkness of my despair as I was swallowed alive by grief, I heard the voice of God fill my heart, and He said, 'I will never leave you or forsake you.' And suddenly I knew that I had a daddy, a spiritual Father, and He is good, and He is faithful, and He loves me. And so I decided to live," she said.

— Mary DeMuth, an author and survivors' advocate, explained the sexual abuse that began when she was 5 years old.

After kindergarten was completed for the day, she stayed with a babysitter, who pushed her outside whenever two teenage boys knocked at the door, DeMuth recalled. They raped her and continued to do so as the days passed before eventually inviting others to join them in assaulting her.

"And finally as other people started joining in, I thought to myself, 'I'm going to die,'" DeMuth said.

She told the babysitter, who said she would tell her mother but — DeMuth learned later — did not.

The abuse continued, and "as a 5-year-old girl, I thought to myself, 'There is not one human being on this earth who will protect me,'" DeMuth told attendees. " would grandstand her innocence while bystanding the broken. And she is a very sad picture of what the church has sometimes become today in institutional protectionism.

"Our complacency for those who are wounded in our midst must change," she said. Churches should "look to the vulnerable as those who have a gift to give. We are not a drain on your resources. We are a gift to you."

The audience gave each survivor a standing ovation after her talk.