Sweden, Finland push ahead with NATO bids as Turkey objects 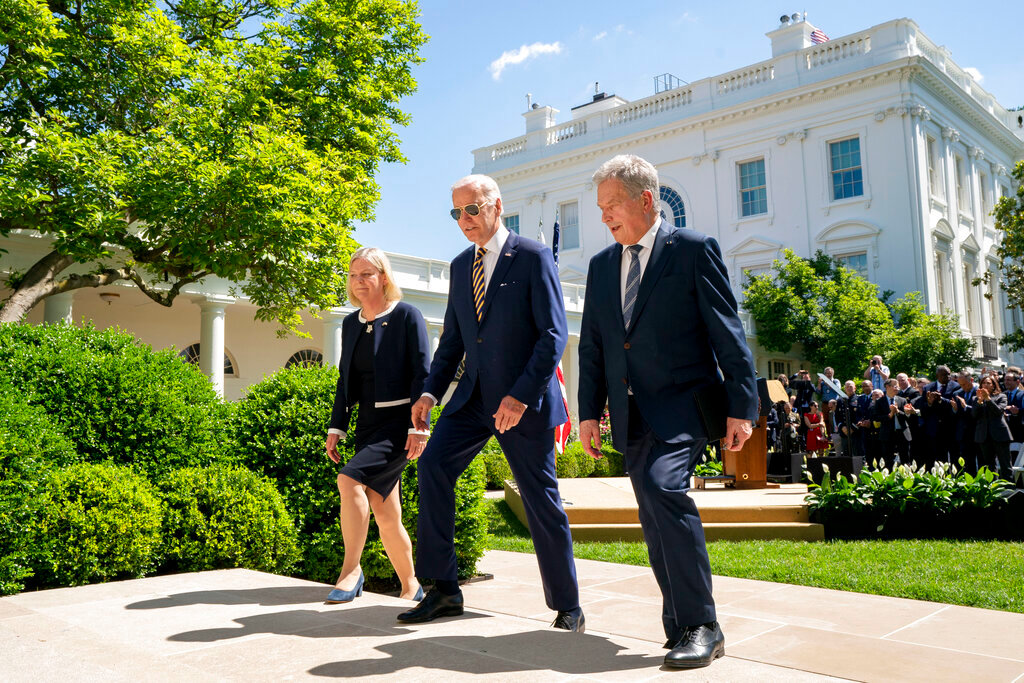 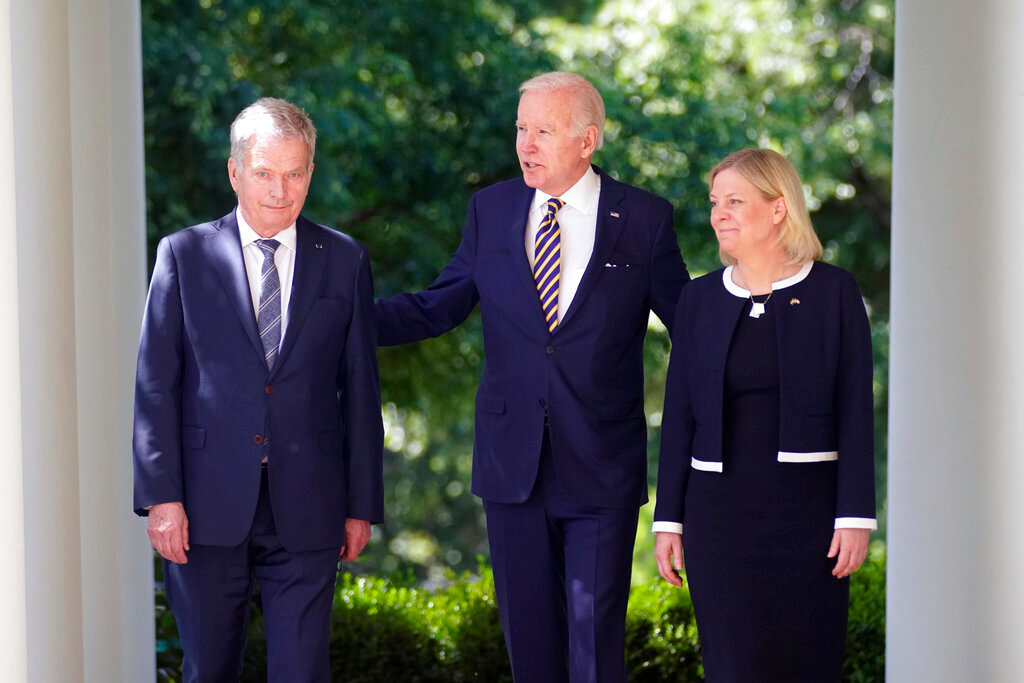 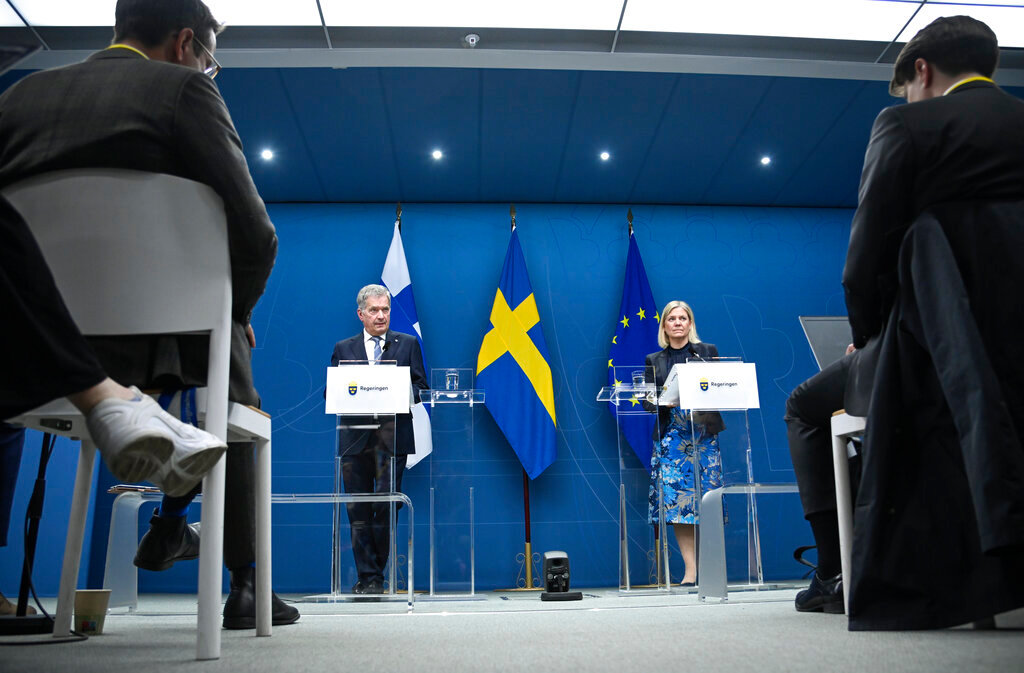 STOCKHOLM (AP) — Sweden and Finland on Tuesday pushed ahead with their bids to join NATO even as Turkey insisted it won’t let the previously nonaligned Nordic countries into the alliance because of their alleged support for Kurdish militants.

Turkish President Recep Tayyip Erdogan’s strongly worded objections caught the two applicants and other NATO members off guard, complicating what was envisioned to be a swift expansion of the alliance in the wake of Russia’s invasion of Ukraine.

“Turkey’s statements have changed very quickly and hardened in recent days. But I am sure that we will resolve the situation with constructive talks,” Finnish President Sauli Niinisto said during a visit to Stockholm, the Swedish capital.

Niinisto said he spoke to Erdogan in early April "and it was crystal clear that he was supportive, and he said that the Finnish membership should be assessed favorably. Now it seems that there are different opinions. We must continue to discuss.”

The Finnish parliament on Tuesday resoundingly rubber-stamped the government’s decision to seek membership in a 188-8 vote. The foreign ministers of both countries signed formal application letters to be handed over jointly on Wednesday at the alliance’s headquarters in Brussels.

But Erdogan's objections on Friday and again on Monday raised questions about how quickly the application process could advance, as unanimity among all 30 NATO countries is required for new members to join. The Turkish leader accused the Nordic countries of giving safe haven to “terrorists" and imposing sanctions on Turkey — an apparent reference to the suspension of Swedish and Finnish weapons exports in 2019 after Ankara sent troops into northern Syria to attack Kurdish fighters.

Erdogan also dismissed a Swedish plan to send a team of diplomats to Turkey to discuss the issue, saying “don’t wear yourselves out.”

Turkey’s objections appeared to have come as a surprise also in Washington, whose relations with Ankara have been strained in recent years. The U.S. suspended Turkey from its F-35 fighter jet program over Turkey's decision to purchase a Russian missile defense system.

Turkish Foreign Minister Mevlut Cavusoglu was traveling to New York for meetings Wednesday with U.S. Secretary of State Antony Blinken. Meanwhile, the White House announced that President Joe Biden would meet Niinisto and Andersson in Washington on Thursday to discuss their NATO applications and support for Ukraine among other issues.

Joining NATO would be a huge shift for the two Nordic countries. Sweden has stayed out of military alliances for more than 200 years, while Finland adopted neutrality after being defeated by the Soviet Union in World War II.

Russia has repeatedly warned its Nordic neighbors that their joining the alliance would have negative repercussions. The Swedish prime minister warned citizens to brace themselves for potential disruptive moves by Russia, including disinformation and attempts to intimidate and divide the country.

The Russian Foreign Ministry said Tuesday it was expelling two Finnish diplomats and would leave a multinational organization focused on the Baltic Sea. It also said the Finnish ambassador was read a protest against “Finland’s confrontational course in relation to Russia,” including its role in international sanctions against Russia and arms supplies to Ukraine. The statement made no mention of NATO.

European officials expressed hope that Turkey's objections to Finnish and Swedish membership in NATO could be overcome.

The European Union's foreign policy chief Josep Borrell said the two countries would receive strong support "from all member states, because it increases our unity, and it makes us stronger.”

“At the end of the day, I am convinced that Turkey can’t slam the brakes on this," he said.

Turkey accuses several European countries of supporting the banned Kurdistan Workers’ Party, or PKK, leftist extremists and followers of the U.S.-based Muslim cleric Fethullah Gulen who Ankara claims was behind a failed military coup attempt in 2016.

Turkey’s justice minister Bekir Bozdag on Tuesday said Sweden and Finland “have not returned a single” suspect that Turkey wants extradited for alleged links to PKK or the Gulen movement.

“Those who prefer terrorist organizations over Turkey should see that their own choices have made them lose,” Bozdag said.

Many Kurdish and other exiles have found refuge in Sweden over the past decades, as have members of Gulen’s movement more recently. According to Turkey’s state-run media, Sweden and Finland have refused to extradite 33 people wanted by Turkey.

Sweden denies supporting PKK, which is terror-listed by the EU, but has had contacts with Kurdish fighters in Syria who played a key role in the fight against Islamic State group militants.

Turkey makes no distinction between the Kurdish groups.

Amineh Kakabaveh, a former Kurdish peshmerga fighter from Iran who fled to Sweden and now serves in the country's Parliament, implored the government to not cave to Erdogan's demands.

“Everyone who is for Kurdish rights is a terrorist to him," she said. “It is unacceptable that he gets involved in Swedish politics."