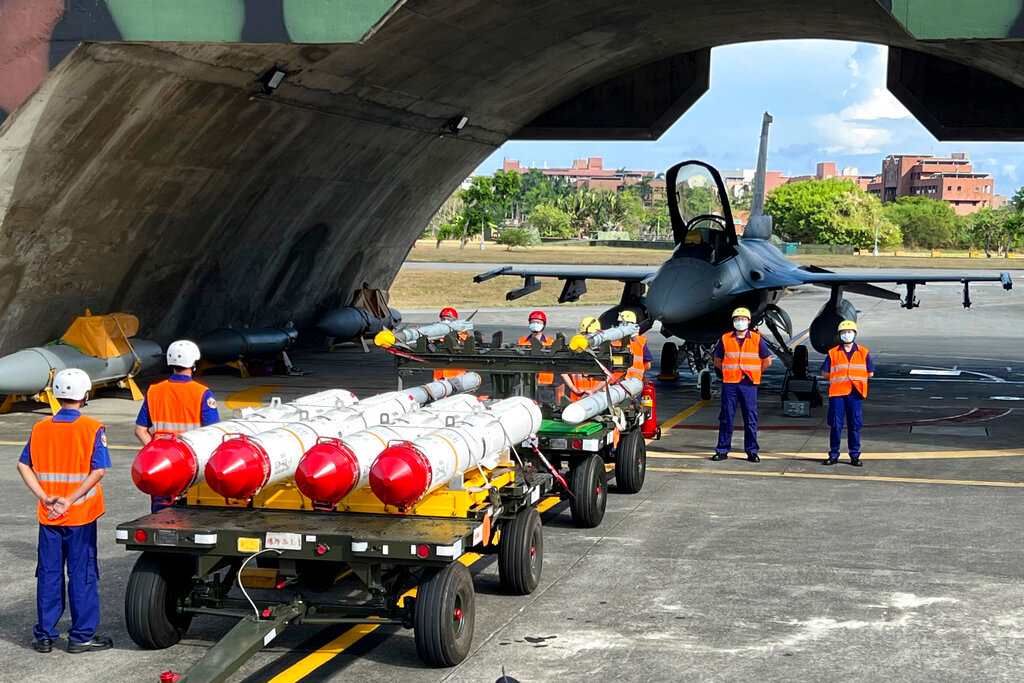 Military personnel stand next to Harpoon A-84 anti-ship missiles and AIM-120 and AIM-9 air-to-air missiles prepared for a weapon loading drills in front of a F16V fighter jet at the Hualien Airbase in Taiwan's southeastern Hualien county on Wednesday, Aug. 17, 2022. (AP Photo/Johnson Lai)
Posted Wednesday, August 17, 2022 9:29 am
By JOHNSON LAI, Associated Press

The exercises Wednesday off the southeastern county of Hualien follow days of Chinese missile firings and incursions into Taiwan’s sea and airspace by ships and planes from the People’s Liberation Army, the military wing of China’s ruling Communist Party.

Taiwan's Foreign Ministry spokesperson Joanne Ou said China was using recent visits by U.S. Congress members including House Speaker Nancy Pelosi as a pretext for escalating its attempts to intimidate Taiwan into accepting what it calls its terms for “peaceful reunification."

“China launched military provocations on these grounds. This is absurd and a barbaric act, which also undermines regional stability and interferes with shipping and commercial activities in the Indo-Pacific region," Ou said.

China sees the island as a breakaway province to be annexed by force if necessary, and considers visits to Taiwan by foreign officials as recognizing its sovereignty.

Alongside its military threats, China imposed visa bans and other sanctions Tuesday on Taiwanese political figures. China exercises no effective legal authority over Taiwan and it’s unclear what effect the sanctions would have.

China has refused all contact with Taiwan’s government since shortly after the 2016 election of President Tsai Ing-wen of the pro-independence Democratic Progressive Party. Tsai was overwhelmingly reelected in 2020.

The DPP also controls the legislature, while the vast majority of Taiwanese favor maintaining the status quo of de facto independence along with strong economic and social connections between the sides.

China accuses Washington of encouraging the island’s independence through the sale of weapons and engagement between U.S. politicians and the island’s government. The U.S. says it does not support independence and has no formal diplomatic ties with the island, but it is legally bound to ensure Taiwan can defend itself against threats from China, including a blockade.

Aside from putting its military on alert, Taiwan has largely played down the threat from the Chinese exercises and life has continued as normal among a population of 23 million that has lived under the shadow of bellicose rhetoric and saber rattling from China for more than seven decades.