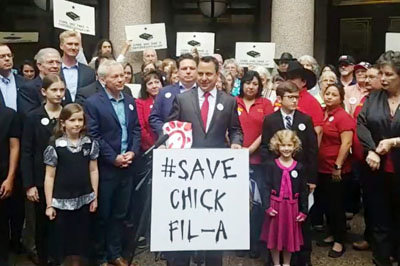 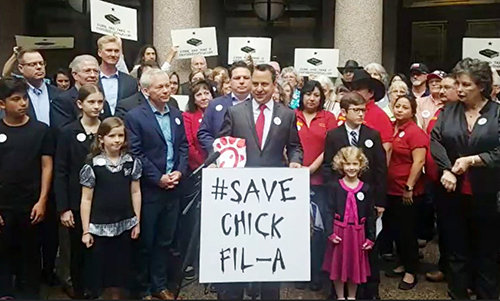 Texas Values President Jonathan Saenz urged the public to attend a "Save Chick-fil-A Day" rally at the Texas Capitol as the legislature considered two bills that would strengthen religious liberty protections. Submitted photo/BP

AUSTIN, Texas (BP) — Religious liberty advocates held "Save Chick-fil-A Day" at the Texas Capitol April 17 after the restaurant was banned from the San Antonio airport for donating to religious non-profits.

Texas Values sponsored the event as the legislature held public hearings on House Bill 1035, dubbed the Free to Believe Act, which would provide freedom of conscience protections; and House Bill 3172, the First Amendment Defense Act, which would protect religious beliefs and moral convictions regarding marriage. Both bills are still in committee.

Southern Baptist pastor Danny Forshee, U.S. Sen. Ted Cruz, and Southern Baptists of Texas Convention (SBTC) ethicist Cindy Asmussen attended the event which, according to its Facebook page, drew more than 500 supporters to the capitol in the course of the day.

Forshee, pastor of Great Hills Baptist Church in Austin and chairman of the SBTC executive board, said Texas faces a "sad day, really, when you think about somebody can be persecuted and discriminated against in the great state of Texas solely upon their religious beliefs."

The council decision is the latest in a string of objections to Chick-fil-A community involvement, stemming from Cathy's 2012 statement that he supports a biblical definition of marriage that prohibits gay marriage. By a vote of 5-4, the San Antonio council refused April 18 to reconsider its March 21 vote that blocked Chick-fil-A from operating at the airport, with one councilman accusing the business of having a "legacy of hate" because it donates to charities considered to oppose LGBT rights. The council is among a growing number of groups in the U.S. to ban Chick-fil-A on similar accusations.