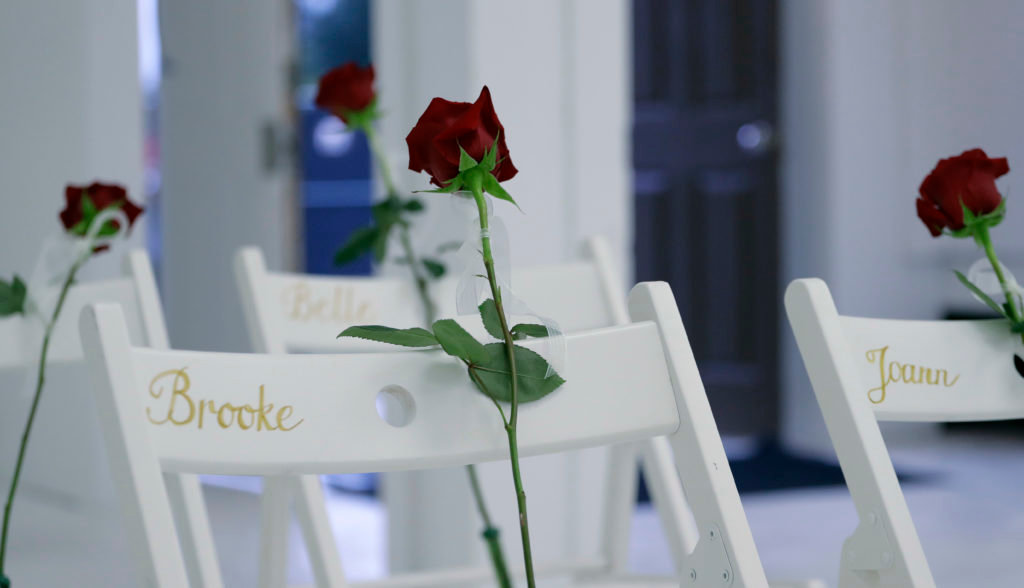 FILE - In this Nov. 12, 2017 file photo, a memorial for the victims of the shooting at Sutherland Springs Baptist Church includes 26 white chairs, each painted with a cross and and rose and placed in the sanctuary, in Sutherland Springs, Texas. A federal judge ruled Wednesday, July 7, 2021, the U.S. Air Force was "60% responsible" for the attack at First Baptist Church in Sutherland Springs because it failed to submit Devin Kelley's criminal history into a database, which should have prevented the gunman from purchasing the weapon used in the attack. (AP Photo/Eric Gay, File)
Posted Wednesday, August 25, 2021 9:42 pm
Baptist Press

SUTHERLAND SPRINGS, Texas (BP) — So painful was the decision to demolish the sanctuary where a mass gunman killed 26 people in 2017, including an unborn child, that members couldn’t unravel the details of how to proceed.

Members of First Baptist Church of Sutherland Springs voted 69-35 on Aug. 22 to demolish the 100-year-old building that had been preserved as a memorial. On Nov. 5, 2017, Devin Kelley methodically walked through the sanctuary killing 25 people, including a pregnant woman, and injuring 20 others before killing himself.

“This decision was loaded down with so much emotion on both sides that we agreed that no more conversation would be had ’till we voted to see what the future held for the memorial corner, so as not to ruffle anything that would not have had future bearing anyway,” Pastor Frank Pomeroy told Baptist Press Tuesday (Aug. 24). “So the next conversation will be about when and how to remove the facility.

“Most, if not all, of those that wanted the enclosed facility to stay was for historical purposes of the 100-year-old building. So I have asked them to try and find someone who would disassemble and reassemble (the building) elsewhere for posterity’s sake. At the present time no one has come forward, but that would be the optimum solution in my opinion.”

Since 2019, the congregation has worshiped in a new facility funded by the North American Mission Board with gifts made through the Southern Baptist Convention’s Cooperative Program and other donations.

Months after the killings, the church preserved the original facility as an enclosed memorial, but Pomeroy had long proposed erecting a memorial garden at the site.

“We as a church have voted to remove the old enclosed memorial facility and replace it with an open air facility that will have 24/7 access. Whereas an appointment was needed previously to go in, now it will be fully open,” Pomeroy said. “We as a body decided this was the best way to honor the lives that were lost that fateful day and also the survivors that still have to go by the old facility and be reminded of the tragedy. This will give opportunities of worship and prayer at all times to everyone who desires to pay their respects and honor the martyrs of that fateful day.”

While plans remain to be discussed and finalized, Pomeroy said ideas include “a more permanent structure of church ribs with windows holding the old stained glass and benches and QR codes that allow visitors to hear tracks of the deceased and information.”

Southern Baptists and others have supported the church in its recovery efforts.

The tragedy has led to continuing litigation. Among recent court rulings, federal Judge Xavier Rodriguez of the Western District of Texas deemed the federal government was 60 percent responsible for Kelley being able to buy the assault rifle used in the massacre.

Rodriguez said the U.S. Air Force had failed to report to the FBI Kelley’s bad conduct discharge in 2014. Two years earlier, he had been convicted of assaulting his wife and stepson, the Texas Tribune reported. Kelley was able to purchase an assault rifle because his name was not in a database that would have disqualified the purchase, Rodriguez ruled.

Kelley reportedly used a Model 8500 Ruger AR-556 fitted with a 30-round magazine in the attack. In June, the Texas Supreme Court ruled that the Academy Sports and Outdoors store that sold Kelley the rifle could not be held liable because Kelley’s name was not in the proper database.

Both the federal and state lawsuits consolidated complaints by several survivors and families of victims. Reportedly, other related lawsuits are outstanding.