The abortion industry’s Unplanned assist to a pro-life movie 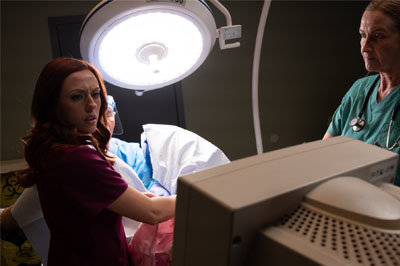 A scene in “Unplanned” captures America’s own self-denial when it comes to abortion. Based on the story of Abby Johnson, herself a former Planned Parenthood clinic director and “Employee of the Year” who broke from the organization, it involves Johnson’s own pregnancy.

On a particularly eventful day at their clinic, she and her co-workers wait until everyone is gone to have a secret baby shower for Johnson. It’s the same scene you’d witness anywhere else, with laughter, clothes for an infant, balloons, and cake. 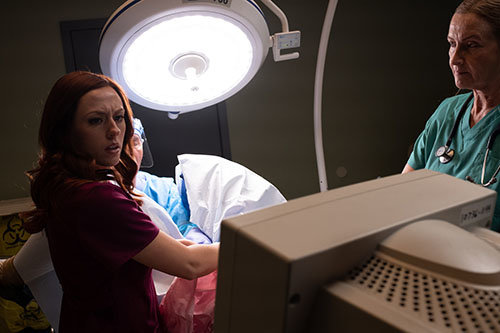 Abby Johnson, portrayed by Ashley Bratcher, witnesses an abortion in the moment that changes her life, as portrayed in the new movie "Unplanned." UNPLANNEDFILM.COM/Special

The only difference is this one took place in the same building where 38 babies had been murdered only hours earlier. The PP workers here aren’t portrayed as evil in all of this, just blind to the reality of it all. With the gaining ground of support that “Unplanned” has seen over the last several days, there’s a hope that more Americans will wake up from the horror of abortion and its impact on women.

Johnson, portrayed by Atlanta actress Ashley Bratcher, spends most of “Unplanned” as the director of a Planned Parenthood clinic in Bryan, Texas. Along the way she earns accolades from her superiors, including the aforementioned honor of “Employee of the Year.”

It all changes when the truth of her work comes into view for her. One day when the clinic is short-staffed, she’s asked to step in and help with the sonogram image during an abortion. She’s unable to turn away and therefore sees the baby fighting for its life. She watches, horrified, as it’s suctioned out of the birth canal.

That scene happens in the first five minutes of “Unplanned” and sets the tone for it not being your typical PureFlix production. The movie company that touts Christian entertainment has produced dramas before such as “God’s Not Dead” and “The Case for Christ.” But with a subject such as abortion, PureFlix takes things several steps further in “Unplanned.”

Johnson’s story is honest, raw, and not pretty. Her path to understanding the weight of her actions as a Planned Parenthood volunteer and leader take longer than viewers would expect. In watching it I saw comparisons with the Apostle Paul. Both had the blood of many on their hands, doing something they thought righteous and good. Both had an unexpected encounter with the truth change their life. And, at first both felt unworthy of the grace offered in spite of their past.

I admit I’m not a movie critic, but Bratcher’s portrayal of Johnson got to me. There are several moments in the film where her view of “right” when it comes to her job gets chipped away. Slowly, the scales fall from her eyes until she’s sobbing in the offices of the pro-life group that has maintained a vigil outside of the clinic she operated, unable to continue in her work.

No doubt Bratcher tapped into her own past in playing Johnson. In an AJC interview she told how for a long time she was “middle-of-the-road” when it came to abortion. But while filming “Unplanned,” her mother told her how, at 19 years old, she’d almost aborted Bratcher.

That revelation plus what she’s learned in the movie led the actress and mother to become pro-life. Her own experience as a single mother affected her as well. Pregnant and alone, many told her she was throwing her acting career away by having a child. But having her son saved her, she said.

“He taught me to love unconditionally, and what it meant to put someone else ahead of myself,” she testified. “And having my child empowered me, because it made me want to be a better person, it made me fight for something, it just taught me so much about life because I chose to have him.”

Now living in Atlanta, Bratcher recently said she was thrilled over the state’s passage of a fetal heartbeat act.

“I couldn’t be more proud of our fearless leaders like Governor Brian Kemp who stood for life in the face of all the threats and backlash,” she told the AJC. “Abortion is not healthcare. Now, it’s time to focus on providing real quality healthcare that supports women and their babies. I am honored to be part of building a culture of life in Georgia.”

In February PureFlix was informed “Unplanned” would receive an R rating, the first in the studio’s history. The reason? For “disturbing, bloody images.” If that’s the sole reason, I’d agree. There were bloody images, and they were disturbing. But that rating also brings up an interesting scenario.

“A 15-year old girl can get an abortion without her parent’s permission, but she can’t see this movie without adult supervision? That’s sad,” said Ken Rather, executive VP of Distribution for Pure Flix, according to The Hollywood Reporter.

In addition, the R rating also meant Unplanned previews could only be seen before other R movies, not really PureFlix’s core audience, and anyone under 17 couldn’t see it without a parent’s permission (I took my 16-year-old daughter, by the way.). Other marketing difficulties followed. A half-dozen major music labels refused license requests for the film, The Washington Post reported. Other than Fox News and the Christian Broadcasting Network, TV stations refused to run ads for it.

Last weekend during Unplanned’s debut, its Twitter account was suspended for about an hour-and-a-half. The reason, according to Twitter, was that the account was linked to another account that had broken Twitter’s rules, which triggered the automatic suspension. Still, the Unplanned account had been set up in August, and for some reason wasn’t seen to warrant suspension until seven months later during its opening weekend, so … forgive us pro-lifers for thinking something else is at work.

Fans, including actress Patricia Heaton, responded to Twitter CEO Jack Dorsey that even after the account was reinstated they had trouble following it.

There’s one more thing to consider. Since Johnson’s story revolves around her time at Planned Parenthood, Unplanned gives plenty of anecdotes on what goes on behind the scenes and how PP leadership truly sees abortion. I won’t give them away but trust me, if they weren’t true you’d expect a lawsuit. Last I checked there were none in the works from the abortion provider. Makes you wonder.

Despite all those obstacles mentioned beforehand Unplanned surpassed $6 million in its first weekend and finished fifth at the box office.

I read one commenter compare its potential impact to Uncle Tom’s Cabin, the Harriet Beecher Stowe novel that changed a culture’s view of slavery. That was just a book. The ones who fear Unplanned – and make no mistake, they fear it – will classify it as just some movie about pro-life (they’ll say "anti-abortion") zealots.

It’s going to be a fight. Do that by not just supporting pro-life causes pre-natal, but ways to help women and children struggling to have a fair shot at life. Volunteer. Be the difference. One way to get that started is to see Unplanned.