The challenge of missions in the Amazon Basin

Transportation is challenging in the Amazon Basin for IMB missionaries. But the Amazon and its tributaries provide a passageway to many areas of the South American continent.
Posted Monday, November 27, 2017 12:00 am
Gerald Harris

Transportation is challenging in the Amazon Basin for IMB missionaries. But the Amazon and its tributaries provide a passageway to many areas of the South American continent.

MCDONOUGH — Aaron and Lizzie Walston* have been missionaries to South America with the International Mission Board for the last 12 years. Currently, they are serving in the Amazon Basin as a part of a team trying to get the Gospel message out to people groups that have very limited access to the outside world.

Aaron, originally from Carroll County, grew up attending Georgia Baptist churches and hearing about Christ as a child, trusting Him as Lord and Savior at age ten. Aaron commented, “I began to really grow as a believer when I was 16 years old. The youth minister at my church began to disciple me and that is when I began to take my walk with the Lord seriously.

“When I was 18 I attended the Georgia Baptist Mission Board’s Youth Evangelism Conference (YEC) in Macon. It was there I sensed the Lord calling me into the ministry. My youth minister asked me what I felt God wanted me to do and I told him I didn’t know specifically, but I had always had an interest in missions. He suggested I go on a mission trip.

“That made complete sense to me,” Aaron reasoned, “so I signed up for a trip that had been emphasized at the YEC event. The trip was called 'Jamaica for Jesus' and designed for high school and college students who were willing to go into the mountains of Jamaica and minister to the impoverished people in that area. It was in the mountains of Jamaica that the Lord confirmed that international missions was exactly what he was calling me to do.”

Lizzie grew up in a military family and lived in several locations, but moved to Houston County when she was ten and remained there until after she graduated from high school. She recalled, “My family did not attend church and I only went to church a few times with friends.

“When I was in high school I had a friend who invited me to a youth service. After that service he shared the Gospel with me. He was the first person ever to share the Gospel with me and I had lots of questions. He answered all my questions and one night when I was 16 years old and sitting alone at home I asked Jesus to be my Lord and Savior. But it was not until I was in college that I really learned what it meant to be a genuine Christian.”

Aaron added, “Lizzie and I met in college at our Baptist Collegiate Ministry (BCM) as we were preparing for a mission trip to Daytona, FL, for 'Beach Reach.' She was a freshman and I was a sophomore and we had never met until that time. While in Daytona we spent a lot of time ministering together and went back to school as good friends.

“Later that year we began dating and the following spring break went on our first international missions trip together to Honduras through our BCM. It was there in Honduras that we were certain we’d be doing international missions together once we finished our education. The following spring break, we were back in Honduras and that is where I proposed to Lizzie. We married in 2002 after graduating from college and headed off to seminary to prepare for the mission field.”

Going to the Amazon

Lizzie graduated from college with a major in Business, a minor in Spanish, and a deep desire to use Spanish in the ministry to which they had been called. However, when the Walstons had finished their seminary training and were ready to be appointed the openings in the Americas were limited and the IMB’s emphasis was on Asia. They also wanted to be able to minister to unreached people groups and not in a region where the Gospel had been preached for decades. 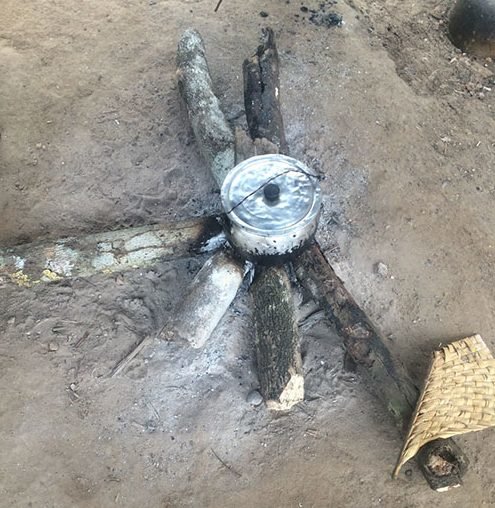 In the Amazon jungle kitchens are primitive, but missionaries make the necessary adjustments to provide for their own needs and properly relate the the people they are trying to reach.

The Walstons' criteria for missionary service eventually led them to accept a job request to serve among an unreached people group in the Andes Mountains before finally accepting an appointment to serve in the Amazon Basin.

Aaron explained, “In our first assignment we were in an area of over 80,000 indigenous people with less than one percent having ever been reached with the Gospel message. Some of these people had access to the Gospel message, but had been resistant to it. Through the hard work of the team in the Andes we were able to see people saved and baptized. Eventually four Baptist churches were planted in that area.

“We were eventually given another assignment in the Andes and had the responsibility of mentoring new missionaries and get the Gospel into an oral format so that the indigenous people could understand it. The new approach was eventually accepted by missionaries from other organizations and is now being used to reach non-literate people in that area of the Andes Mountains.

“Our greatest challenge to being on the mission field is living in remote areas with very poor infrastructure. I am sure our challenges are nothing compared to those of our predecessors that went out before modern technology existed, but there are still significant challenges. For example, we have spent most of our missionary careers living in areas with very poor medical care. This necessitates mostly self-medication and expensive travel when medical needs are too serious to be treated in our local area.”

Aaron continued, “Travel is also a problem, because the roads in the Andes and Amazon Basin are in extremely poor condition. In the Andes we had to watch for landslides and dangerous cliffs on one-lane roads with drop-offs in excess of 1,000 feet and poor visibility. In the Amazon if there is a road, you can be certain it is in poor condition due to the rain and moisture in the jungle. Most of the time we travel by river, which invites other challenges and dangers. When we are out in remote areas communication is also non-existent.”

“Even with all of the challenges, we’ve been blessed and have seen the Lord work in amazing ways. Once while serving in the Andes, a national pastor’s toddler swallowed a button battery that became lodged in his esophagus. The boy was taken to a local clinic for treatment, but they only managed to push the battery further down in his esophagus. 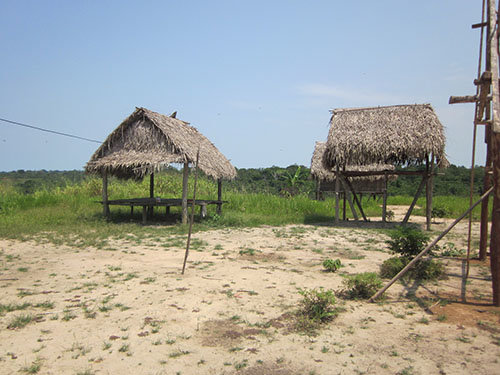 These modest huts provide a measure of protection from the rain and some intruders that could potentially interrupt a night of blissful sleep.

“In the next town where medical care was a step up, they weren’t able to help either. He was then transported to a large city several hours away by ambulance. The time that passed from the moment he swallowed the battery until he made it to the hospital in the large city was 20 hours.

"By the time the doctor saw him, he announced to the family that it was too late and nothing they did would help. However, to make them feel better, he decided to attempt a surgery to remove the battery.

“The doctor was certain that the damage was done and surgery would not help, but he went ahead with the surgery anyway. He performed the surgery and told the family to prepare for the child’s death. Praise the Lord, that little boy not only recovered, but now, you would never know that he went through that experience years ago except for the small scar that remains on his back."

“Through that experience, we witnessed the power of our Lord through prayer and how even the seemingly impossible is possible with our Creator!" he concluded. "We were able to share the gospel message with doctors and staff members of that hospital and many people in the pastor’s home village began coming to church to learn more about the God that had power to heal his son.

“Today, we see the Lord responding in the same way to prayers as we see people coming to a saving knowledge of Christ that many said were unreachable with the Gospel message.

“I’m sure it has been said more than a thousand times before, but I’ll say it again. There is no way we could do what we do without SBC churches supporting us from home through their prayers, sacrificial support, and partnerships with us as mission volunteers. We are very grateful for Southern Baptists who take Christ’s commands to reach the nations seriously and we are thankful for their prayers and sacrificial giving that allow us to serve in the Amazon Basin!”

China sets sanctions on Taiwan figures to punish US, island