The Greatest Show on Turf 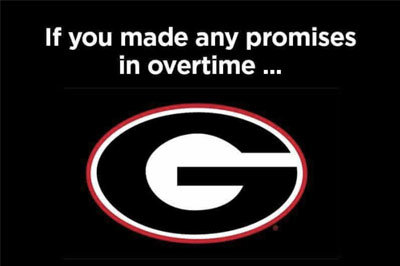 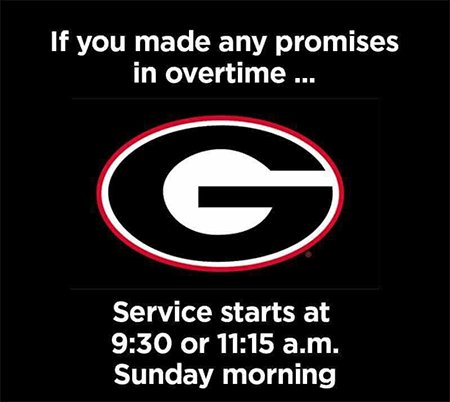 A popular meme making the rounds on social media in the days after Georgia's Rose Bowl win reminds fans of any prayers offered during the game.

It could legitimately be called “The Greatest Show on Turf.” That term originally became the nickname for the record-breaking offense of the St. Louis Rams back in 1999, but it certainly epitomized the semi-final NCAA football championship game between the Georgia Bulldogs and the Oklahoma Sooners earlier this week.

My wife was born and reared in Georgia. She has been a “Dawg” fan all her life. She was a cheerleader at Newnan High School. When our sons played high school and college football we often videotaped the games and when we viewed the videos Martha Jean’s cheers could be heard above the band and all the other fans. She is an avid, fervent, passionate – yes, even fanatic – Georgia fan, sometimes requiring someone to curb her enthusiasm when her team is on a roll and occasionally requiring psychological counseling when the team is floundering, which rarely occurred this season.

Since I am more of a calm, docile, reticent individual I refuse to allow my emotions to get too pronounced at such incidental trifles. But on Monday night we both were totally absorbed in the marathon gridiron contest until the second overtime produced a miraculous blocked field goal and a victorious 27-yard touchdown run by Sony Michel to clinch the victory.

Now, the Georgia Bulldogs must face the Alabama Crimson Tide in Atlanta’s new Mercedes Benz Stadium for the national championship. Georgia Coach Kirby Smart came to Athens from Alabama, where he was Nick Saban’s defensive coordinator. It was not helpful to learn that Saban is 11-0 when coaching against his former assistants.

The Tuscaloosa team is predicted to win, but people are clamoring for tickets; and the principle of supply and demand has driven the price of tickets up, up, up. Today, StubHub had tickets available from $1,350 in the nose- bleed section to $5,580 nearer the field of play.

The stadium will be filled with business tycoons, politicians, and celebrities from the world of sports and entertainment. Yesterday it was announced that President Donald J. Trump would be in Atlanta for the game.

Martha Jean and I will watch the game from the warm confines of our sitting room with some hot chocolate and homemade delicacies and pull for the “JakefromStateFromm”-led Bulldogs. By the way, that is the name of Georgia freshman quarterback Jake Fromm’s Twitter account moniker.

Remember the famous TV commercial where a wife walks in on her husband who’s on the phone with a State Farm agent at 3 a.m.? That is certainly a strange time to be talking to an insurance agent, so the wife, in a suspicious tone, asks, “Who are you talking to?"

In disbelief she takes the phone away from her husband and asks, “Who is this?” The khaki-wearing State Farm agent working the overnight shift says, “Jake from State Farm.”

Oh well, forgive the momentary rabbit chasing, but the eyes of the nation will be on Jake Fromm and Alabama quarterback Jalen Hurts on Monday night. Until then the media will have a grand time highlighting every facet of the two school’s football programs.

Has football become an idol in our nation? Does it gain more media coverage than religion? Has the Bible Belt become the Pigskin Belt?

Jesse T. Jackson, writing for ChurchLeaders.com says, “Football might be an idol if …

I enjoy football, but it is not my god, for I realize that whatever I seek, honor, or exalt more than God, this is the god of idolatry. I am determined that there shall be no rival to the place Christ has in my heart.