The small church that 'could' makes a big splash in Houston

Some of the members of Foothills Community Church in Marble Hill gather around one of several pallets they shipped to storm-ravaged Houston. FOOTHILLS CHURCH/Special
Posted Saturday, September 30, 2017 10:43 am
Joe Westbury

Some of the members of Foothills Community Church in Marble Hill gather around one of several pallets they shipped to storm-ravaged Houston. FOOTHILLS CHURCH/Special

But that’s what happened when Hurricane Harvey devastated Houston, TX, earlier this month … and Foothills Community Church was one of the first in Georgia to respond.

Bart McMillan, intentional transitional pastor at the church, said the unusual story began with a sermon he didn’t expect would have an immediate response. After all, he had only been serving the congregation for six weeks and was well into a sermon series on the Six Ships of the Church – Lordship, Relationship, Fellowship, Stewardship, Discipleship, and Worship. The stewardship sermon had already been scheduled for Sept. 3.

And we all know how stewardship sermons are received. 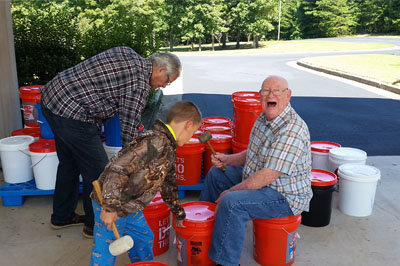 A surprising 200 Buckets of Care were assembled by the small church ... about two for every person who regularly attends Sunday morning worship. FOOTHILLS CHURCH/Special

As timing would have it, Hurricane Harvey came ashore in south Texas on Aug. 25 and dumped 52 inches of rain through Sept. 1. That’s when McMillan remembered a longtime friend and fellow pastor in Houston being impacted by the disaster and asked how he could help.

That’s how small Foothills Community Church in the mountains of north Georgia, which averages 110 in Sunday morning worship, ministered to Bayou City Fellowship in suburban Houston, TX, with 3,600 members in attendance on two campuses.

“Two days after Harvey’s initial landfall, with the massive storm stalled and still dumping rain, I preached a sermon on stewardship and gave the congregation an opportunity to respond. I talked about how stewardship includes talent, knowledge in a specific task, as well as money and time. I reminded the congregation that the Old Testament required a 10 percent commitment but the New Testament requires a 100 percent commitment,” he explains.

And, he adds, God had given him the perfect invitation to a message that had been written weeks earlier.

“At the end of the sermon I had 10 church members stand near the altar, each holding a clipboard, and I asked members to sign up and respond as the Lord led. I explained that we were going to help a sister church, and that help would depend on their commitment to biblical principles of stewardship.”

He sheepishly admits he really didn’t know what to expect.

"I prayed for a good response and was going on faith and boy, did they respond," he admits in retrospect. 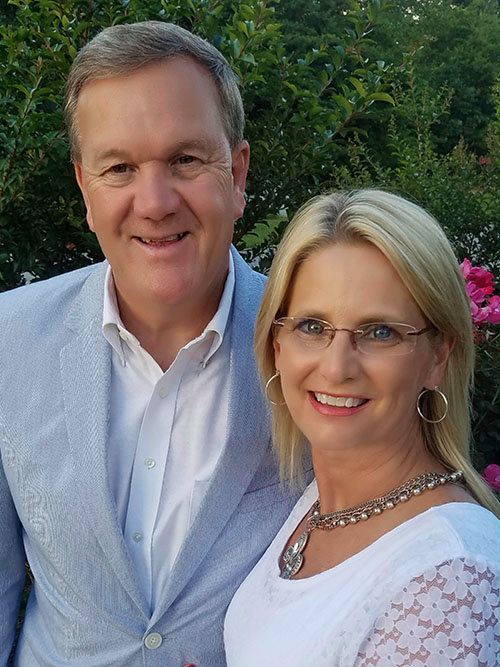 Intentional Transitional Pastor Bart McMillan and his wife, Ocie, are both commissioned chaplains through the North American Mission Board. McMILLAN FAMILY/Special

On one clipboard was written “10 pallets of Water, $175.” A second clipboard said “10 Pallets of Bleach, $225.” A third was dedicated to Bibles. Another was for diapers and still another was reserved for people to pray over every item that would be received by those rebuilding their lives. There were 10 lines on each clipboard for church members to pledge to help meet that need.

Some of the items would travel the 14 hours as pallets, others would be used to assemble Buckets of Care. For some, their stewardship commitment meant donating their time to go as volunteers.

McMillan had preached similar sermons in other settings and, on that dreary morning – with bands of rain from Harvey already falling in Georgia – expected a respectable number of signatures. But that is not what happened as members pondered the sermon.

“When the invitation began, everyone in the service began coming forward. There was not a single person left in the pews; they were standing in line at the altar, signing as fast as an opportunity became available” he says with amazement.

By the time the invitation ended the congregation had collected $10,000 which was enough to completely fill an 18-wheeler. Along with the pallets went 200 Buckets of Care containing the basic essentials that homeowners would need to begin the long, hard task of restoring their home. And on the very top was a purple Bible and a bookmark with the church’s name and a prayer written by Elaine Fincher and Barbara Burson, the current and former prayer ministry directors of the church.

Within days the supplies were purchased, church members had assembled the Buckets of Care, and the big rig – which was donated by Syfan Logistics in Gainesville – was enroute to Cypress, TX. But that wasn’t all. Another Gainesville business, J and J Foods, donated supplies and stored them until they could be picked up.

On the receiving end 957 miles away was Robbie Seay, campus lead pastor for the Bayou City Cypress location in northwest Houston.

Disaster Relief state coordinators like Stuart Lang with the Georgia Baptist Mission Board notes that in times of disaster, well-meaning people want to send items they think are needed. But that is not always the best response and can make matters worse if there is no one to receive the items, no storage is available, and no network to distribute the donations in a timely and coordinated manner. 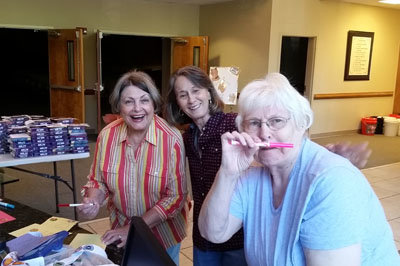 Assembling the items for shipment to Houston, TX, was a church-wide effort. FOOTHILLS CHURCH/Special

What is needed are specific items tailored for the specific needs in each location. That is what made the Foothills plan so effective, and the established partnership with the Houston church on the receiving end.

And that partnership is what made the Foothills plan so effective between the small north Georgia church and the much larger, though hindered, Bayou City Fellowship, Seay says.

“We sent Bart a list of things we desperately needed and that were in short supply or simply didn’t exist here because they had been all purchased. And as soon as a supply arrived they vanished off the shelves as people bought anything they could find.”

Among those items the church was seeking was dehumidifiers, large fans, a specific style of shovel for scooping up mud. They needed paper towels. Diapers. Bleach. And, most important, spiritual help in the form of Bibles for witness opportunities and to replace those destroyed – along with other household belongings – in the flood.

“We were sending out 1,000 volunteers a day and now they could go equipped with the right tools to complete their ministry.”

What is remarkable is that this weekend in Marble Hill, just one month after the storm, the donations that came out of that stewardship Sunday continue to accumulate.

McMillan says the church has received an additional $12,000 and is working to decide where to send a second tractor-trailer. It may return to Houston, or maybe to Florida since Georgia Baptist Disaster Relief teams just entered Cook County this week.

“This is a wonderful church with a heart for serving others. It is 16 years old, tucked into Marble Hill, which few people have heard of but has produced some of the state’s best marble for years. We are near Jasper in Pickens County, but our heart is wherever people are hurting and need to know about Christ.”