The ‘wow’ factor of the Ark Encounter

The Ark Encounter in Williamstown, KY stands against a sky of cumulus clouds at sunrise. ANSWERS IN GENESIS/Special

WILLIAMSTOWN, KY — It has been called “the eighth wonder of the world.” At least that is what some people have called the mammoth ship located in northern Kentucky halfway between Cincinnati and Lexington and right off I-75. The huge vessel is a replica of Noah’s ark described in Genesis, chapter six.

The dimensions of the ark match the dimensions specified by God to Noah for its construction in the days preceding the great flood. It is 510 feet long, 85 feet wide, and 51 feet high. It is enormous! 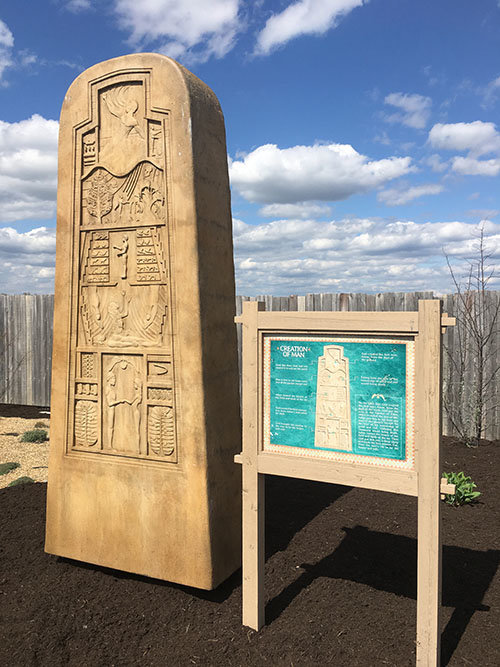 As part of the new monument walk, visitors stroll past several “steles” like this one their way to the Ark’s entrance and learn about biblical themes. AiG/Special[/caption]

According to the attraction’s website, “The Ark Encounter is three exhibits in one – the massive Ark structure itself, the incredible craftsmanship, and the beautifully fabricated teaching exhibits. The combination of all three will amaze and inspire you to think differently about the biblical account of Noah’s Ark.”

And it is better than Noah’s ark, because it is air conditioned in the summer and heated in the winter. And there is not the faintest smell of hundreds of animals that have been confined to a musty ship for months on end.

The architects and designers of the ark carefully thought out every detail of their amazing project: how the animals were kept in the ark; how the food, grain, and water were stored; and how Noah must have structured living quarters for his wife, sons, and their wives and for every “kind” of animal. Every facet of the structure was designed with meticulous detail and craftsmen with the most extraordinary talent fashioned the massive ship with painstaking care.

And people are coming to this amazing attraction by the thousands every day. In the first year more than one million visitors came to the Ark Encounter and the number of visitors seems to be increasing. Recently, in one single day there were more than 8,000 individuals who came to see the Ark and all the additional attractions offered in the park.

The Ark Encounter is actually a theme park with the Ark as the centerpiece. Other attractions include a zoo, zip lines, and a timber-frame restaurant that may seat more people than any restaurant in the nation with a capacity for 1,500 diners.

Cindy Wilson, a tour guide/host for Bob Neff Tours of Lancaster, PA, has brought a busload of people to see the Ark Encounter six times. She commented, “The first time I came I was spellbound by the grandeur and size of the Ark.

“Out of all the people I have brought to Williamstown to this attraction no one has ever been disappointed. The two things I love about the information shared is the emphasis upon the animal ‘kinds’ that were aboard the vessel (In Genesis 1 the Bible says ten different times that God created creatures separately according to various “kinds.” For example, there are multiple species of dogs that God has designed within the original “kind,” but dogs are still dogs).

“Secondly,” Wilson explained, I love the computer-generated explanations of how we got all the people of the earth from Noah’s family.

“Each time we come we stay in the Ark for a whole day and I learn something new every time I come. But in reality, you can only get an overview in one day, because there is so much information.”

There are three levels on the inside of the ark, each with fascinating displays and information concerning Noah and the great flood. AiG/Special

Randy Abbott, who lives in Kane, IL, declared, “It is amazing! This visit to Williamstown helped me understand how Noah could have housed the animals and stored the water and food needed to survive for all the time they were in the Ark.”

Penny, Randy’s wife, added, “The interactive components provided for the kids are beautifully designed to help them grasp the significance and the true meaning of the Ark.” 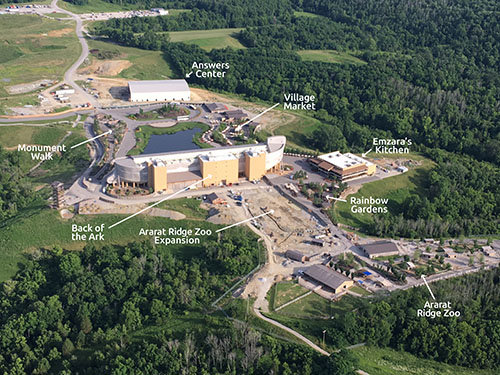 A bird's eye view of the Ark Encounter shows the zoo being expanded and the Answers Center is a 2,500-seat venue for concerts, conferences, and special events. AiG/Special

Saundra Washington from Nashville, TN, described the Ark as “humongous, informative, and wonderful. I expected a lot, but it exceeded my expectations.”

Emerson Strickler, from Redding PA, explained, “Wow! Unbelievable! I was impressed with the mass of it, the size of it. The displays are unbelievable. I never realized before that the one door of the Ark represents Jesus who is the only door whereby we can enter into heaven.”

The Ark contains two fascinating brief films depicting, first, a reporter skeptical of Noah’s project, interviewing him during his construction of the Ark and second, a modern-day reporter, also skeptical, being sent by her tabloid publisher to write a negative story on the Ark Encounter.

The second film, wonderfully produced, highlights Ray Comfort, a New Zealand Christian minister and evangelist who now lives in America, presenting the Gospel and emphasizes the truth that just as the Ark has only one door, Jesus is the one door to salvation and eternal life. The skeptical reporter obviously gets the message and she gives evidence of a changed life.

All the people interviewed in this article also got the message. Cindy Walker concluded, “The message is clear, and the Gospel is presented in a powerful way. It would be hard for anyone to miss the truth that Jesus is the only way to be delivered from the chaos caused by sin.” 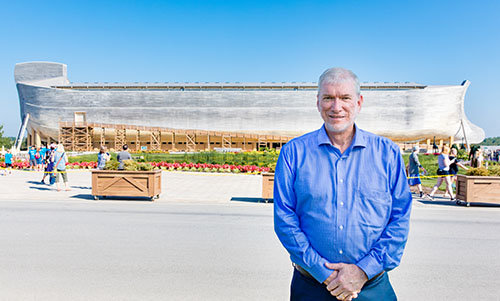 Ken Ham is the CEO and founder of Answers in Genesis-US and the highly-acclaimed Creation Museum and the world-renown Ark Encounter. AiG/Special

The Gospel is all about sinful man headed toward judgment and the ultimate sentence of life without parole in the prison house of despair and God’s intervention through Jesus Christ’s atoning death and resurrection whereby through faith in Him sinful man can have life eternal. The judgment upon the unbelieving in Noah’s day was by the waters of a flood. The next judgment will be in the eternal flames of hell.

The Ark Encounter makes the Gospel message as clear as the sun on a cloudless August day. Plan a trip to northern Kentucky to see the Ark Encounter and the Creation Museum about 30 minutes away. Let this be your next family vacation destination.

Some contend that there are four great Christian attractions in The United States that clearly and unashamedly present the Gospel. They are (1) the Billy Graham Library in Charlotte, (2) the Sight and Sound Theaters (one in Lancaster, PA and one in Branson, MO) and (3) the Creation Museum and (4) the Ark Encounter in northern Kentucky.