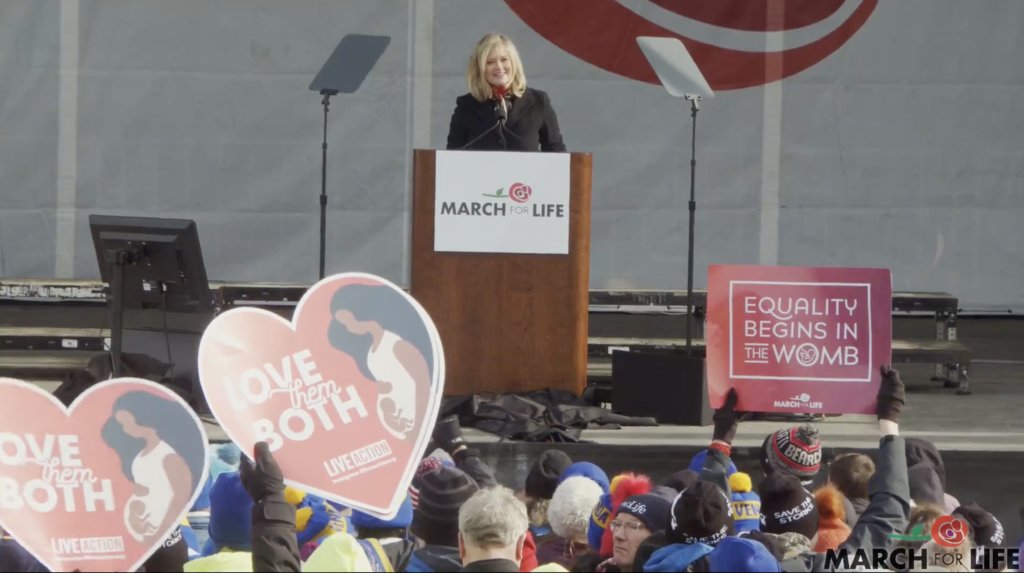 Jeanne Mancini, president of the March for Life Education and Defense Fund, speaks to the crowd at the 49th March for Life in Washington DC on January 21. (Facebook photo)
Posted Friday, January 21, 2022 10:18 pm
By TOBIN PERRY, Baptist Press

WASHINGTON (BP) – Thousands of people braved a brisk 23-degree afternoon to gather at the National Mall for the 49th annual March for Life Friday.

Protesters seemed optimistic that the 50th such march may be the first to take place in a post-Roe v. Wade America. With a theme of Equality Begins in the Womb, speakers at the march emphasized the link between racial and gender equality and the half-century battle to end abortion on demand in the United States.

“The word equality is something that we’re hearing a lot these days, but it’s rarely defined,” noted Jeanne Mancini, who has served as president of the March for Life Education and Defense Fund for almost a decade.

“We’re hearing a lot about equality. And these are topics that need to be discussed. And the truth is that we are all equal in dignity regardless of skin color, disability status, socioeconomic background or stage of life – including the earliest stages in life. Every life has inherent human dignity, and every life matters. Every life should be protected from the moment of conception or fertilization.”

Mancini noted that this year’s crowd was the most excited she has seen at a March for Life in her 10 years attending.

The annual march began in 1974 as pro-life leaders commemorated the one-year anniversary of the 1973 Roe vs. Wade decision that made abortion legal throughout the United States.

The 2022 March for Life, held a day before the 49th anniversary of Roe v. Wade, comes in what looks to many in the pro-life movement like a pivotal year in its effort to overturn the Supreme Court’s 1973 decision. In December, the Supreme Court heard arguments in the Dobbs v. Jackson Women’s Health Organization. The court’s decision in that case could overturn or severely limit the impact of the Roe v. Wade decision.

“Today is the 49th annual March for Life on Capitol Hill, and hopefully the last march before the disastrous precedents set in Roe and Casey are overturned by the forthcoming Dobbs decision,” said Chelsea Sobolik, the director of public policy at the SBC Ethics & Religious Liberty Commission.

“As we eagerly work toward a day when our laws rightly protect the most vulnerable among us, including little ones in the womb, we should also work to ensure that women facing unintended pregnancies have all the help and support they need in order to choose life for their baby,” she told Baptist Press.

Several of the 21 members of Congress who appeared on stage together at the rally spoke about their hope that the tide was turning in the effort to end legal abortion in the United States. A number of pro-life senators appeared on video to add their support to the event.

“I’m honored to be here with all of you today as we collectively raise our voices in unity for those who deserve equal rights under the law, the unborn,” freshman Congresswoman Julia Letlow (R-La.) told the assembled crowd.

“Today I can’t help but reflect on the amazing experience of carrying my own first child and feeling for the first time those incredible flutters of life in my womb. I remember the awe and wonder as a miracle growing inside of me while praying Jeremiah 1:5 over my unborn child: ‘Before I formed you in the womb, I knew you. Before you were born, I set you apart.’ I believe that the Lord makes every one of our lives, every soul,” Letlow said.

Other congressional leaders noted the need for pro-life advocates to remain vigilant in the coming days. Rep. Chris Smith (R-NJ) reminded marchers of the current opposition to the pro-life cause in Washington, D.C.

“President Biden has weaponized the entire federal bureaucracy to aggressively promote abortion on demand at home and overseas, including the full court press to force taxpayers to fund abortion on demand,” Smith said.

“Last September, the House of Representatives passed the Abortion on Demand Until Birth Act that not only legalizes late-term abortions but would nullify every modest pro-life restriction ever enacted. So we have challenges.”

Three abortion survivors, including Lisa Robertson of the television show Duck Dynasty, also shared their stories at the march. Robertson shared her experience overcoming the trauma of abortion and her story of getting involved in the effort to end abortion. She shared three lies she was told the day she aborted her first child. First, she was told the baby she was carrying was “just a slab of tissue.” Second, she was told her body would heal.

“Third, when you leave here today, you can forget this ever happened,” Robertson said. “Again, that was a lie. That was 40 years ago, and every day of my life I think of that day. These lies and many others nearly cost me my life, my family, my children that I carried and birthed. It did cost me two children – and generations of grandchildren. But God rescued me. He forgave me. He redeemed me, and he also gave me a voice to speak out for the unborn. He gave me a voice to speak the truth and not lies. As the body of Christ, we need to be pro-love and pro-life in a pro hate and a pro-choice world.”

Leading up to next year’s 50th anniversary of Roe, the ERLC has launched the Road to Roe50 movement to bring attention to the 62 million babies killed in abortions since the 1973 decision. According to Elizabeth Graham, ERLC vice president of operations and life initiatives, the effort will attempt “to inspire, equip and mobilize the church to affirm and defend the dignity of every human person – born and preborn.”

Graham also notes that the ERLC is grateful for the opportunity to play a role in advancing a culture of life by placing life-saving ultrasound technology into pregnancy resources centers throughout the country. The ERLC has a goal of placing 50 machines by the anniversary. Currently, the ERLC has placed 31 machines into these centers.

“As we prepare to mark the 49 years since Roe v. Wade, the 1973 landmark Supreme Court decision that made abortion a permanent fixture in American life, we lament deeply the loss of 63 million preborn lives along with the incalculable harm to millions of American women,” Graham told Baptist Press.

“We do not grieve, however, as those without hope. Instead, we look with optimism toward the day when a culture of life makes abortion both unthinkable and unnecessary in America. Our hope is in Christ and we trust He will restore what has been broken and will make all things new.”