Tim Tebow is a man’s man 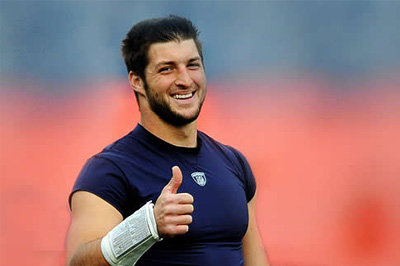 What is a man’s man? Some would say that a man’s man is one who is physically masculine, someone who physically, forcefully, and violently bends nature to his will by brute force, has a cave-man attitude, who can drink other men under the table, and clear out an establishment in a barroom brawl.

Some would suggest that a man’s man is a rugged individualist, an adventurer, a gladiator, a blue-collar worker. Such a man has been described as the kind of bold, brave, unflinching soul who builds his own home, kills his own meat, and personally deals with his own adversaries.

Some would dare think that the rugged, square-jawed, testosterone-fueled good looks in a man qualify him as a man’s man. However, to me a man’s man is the gentleman whose inner resolve and moral convictions set him apart from other men. Tim Tebow, former Florida Gator and National Football League player, is such a man. But to me his muscular body and athletic prowess has nothing to do with it.

It is true that he led the Denver Broncos from one improbably victory after another. He led the team to victories over the New York Jets, Miami Dolphins, Oakland Raiders, and Kansas City Chiefs. And when the shouting was over he did what he always did – he pointed to the sky and took a knee in prayer.

In postgame interviews, the young quarterback started by saying, “First, I’d like to thank my Lord and Savior Jesus Christ” and ends with “God bless.” He stressed that football is just a game and that God doesn’t care who wins or loses.

Some say that although he was a Heisman Trophy winner in collegiate athletics he was poor material for a pro quarterback. Others said that he was an inexperienced passer with awkward throwing mechanics and the build of a fullback.

However, I think he could have become a great NFL quarterback if he had been given a decent chance. He had the physique, the knowledge, and passion needed for the game. I think he was never given a fair chance because he was considered a lightning rod in America’s intermittent culture war of believers vs. secularists.

Let’s bring the story of Tim Tebow up-to-date. It was reported this week that he had been dating the 2012 Miss USA, Olivia Culpo, and that she broke up with him because he wouldn’t have an intimate relationship with her. The New York Daily News said, “The former Miss USA, who was first reported to be seeing Tebow in early October, has told friends that she can’t deal with the famously abstinent star’s lifestyle.”

Tebow, who is known for his Christian convictions, has repeatedly stated that he is saving himself for marriage. In fact, Tebow’s faith, his kneeling in prayer after scoring a touchdown, his philanthropy, and unfaltering moral standards have caused him to be labeled a cultural phenomenon. While I would consider that a compliment to him, it may be an indictment to the rest of us – that we are not representing Christ in a more profound and uncompromising fashion.

The story is told about another beauty queen, Phyllis George, Miss America in 1971 and former sportscaster. She was interviewing Dallas Cowboy quarterback Roger Staubach. It was a rather dull interview until Phyllis asked, “Roger, how do you feel when you compare yourself with Joe Namath, who is so sexually active and has a different woman on his arm every time we see him?”

“Phyllis,” Roger answered, “I’m sure I’m just as sexually active as Joe. The difference is that all of mine is with one woman.”

Tim Tebow said “no” to what must have been an incredible temptation; but like Joseph, who said, “no” to Potiphar’s wife he showed himself to be a man’s man. That kind of moral courage and Christian resolve should be an example and inspiration to every man alive.