Time for Georgia lawmakers to stop being scared of RFRA 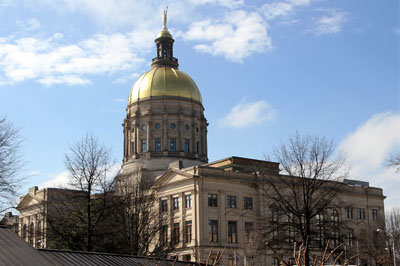 When Democratic Congressman Chuck Schumer introduced the federal Religious Freedom Restoration Act (RFRA) in 1993, it’s highly doubtful he could imagine the shock of someone today reading the first half of this sentence. It’s also doubtful he could have conceived of the way such legislation has become the boogeyman for liberal groups.

Since Governor Nathan Deal's 2016 veto of a bill protecting religious liberty (you’ll find that phrase in scare quotes in other publications), similar bills have failed to pass largely due to hand-wringing over its supposed negative effect on  Georgia’s burgeoning film industry and ability to lure events like the Super Bowl.

I get it. Who doesn’t hope they accidentally bump into Bradley Cooper at Moe’s? But the reality is, eight of the last 12 Super Bowls have taken place in states with their own RFRAs. The announcement earlier this month of Amazon’s new headquarters was supposed to justify Atlanta lawmakers’ economic opposition to enacting such a bill here. It didn’t. Amazon chose to place part of its headquarters in Long Island City and the rest in Virginia, a RFRA state. What’s more, the company’s Operations Center of Excellence (seen as a consolation prize) went to Nashville, located in, you guessed it, a RFRA state.

In 1997 the U.S. Supreme Court declared the federal RFRA didn’t apply to actions by state governments. So, the states started producing their own versions of religious-freedom legislation. Since then 21 states – in a swath from the Northeast cutting across the southern part of the country and through the Midwest, plus Idaho in the west – have done so.

Another surprising fact about the original 1993 RFRA: The ACLU, plus liberal Democrats such as Bill Clinton, Ted Kennedy, and Barack Obama, supported it … at first. That support ended because of cases like the Supreme Court’s June 2014 ruling involving Hobby Lobby. In that case, it was declared the company owned by devout Christians shouldn’t be forced to provide contraceptives that could potentially induce abortions. It was only shortly before Amazon’s announcement that the final answer to objections over that decision were settled.

In essence, liberals fully supported RFRA until they realized it could be used by Christians as well as obscure minority religions.

As stated earlier, religious-liberty legislation has been attempted in Georgia before.

In other words, the Harbin bill merely requires state or local government to meet a high standard of proof in court if it seeks to substantially burden a person's free exercise of religion. It doesn't guarantee a win for that person, but merely a fighting chance to make his case in court.

Examples of persecution of Christians in non-RFRA states are increasing. Take the case of Jack Phillips, owner of Masterpiece Cakeshop in Colorado. Phillips got a favorable Supreme Court ruling in June after being sued for discrimination when he refused to decorate a cake for a same-sex wedding. The case shed light on the difference between allegations and truth  in these cases.

From the accusations and protester chants, you’d think Phillips flat-out refused to serve gay people. Not true. In an op-ed for USA Today, Phillips explained that he never refused to sell a cake to his accusers. However, he sees himself as a participant in every wedding for which he decorates the cake. It’s personal to him through his God-given artistic ability. Creating the cake for what Phillips sees as a corruption of a religious ceremony violated his deeply held beliefs.

He had his beliefs and respected those of the couple, hoping they would return the favor. They didn’t. And judging from the amount of hate mail, obscene phone calls, and death threats Phillips and his family have received, it’s apparent tolerance only runs in one direction.

Yes, Phillips ultimately prevailed in the Supreme Court (on non-RFRA grounds), but Colorado bureaucrats are now attacking him again for essentially the same thing. A state-level RFRA in Colorado might have prevented these years-long, ruinously expensive nightmares.

The same can be said for Baronnelle Stutzman. Last year the Washington Supreme Court ruled Stutzman had discriminated against two men when she declined to  provide the floral arrangement for their wedding. Having served gay people – including one of the plaintiffs – for many years, it would be difficult to say “she didn’t serve gay people.” In light of the Masterpiece Cakeshop ruling, Stutzman’s case is getting a second look.

Another shot at religious-liberty legislation for Georgia came  earlier this year with Senate Bill 375, the “Keeping Faith in Adoption and Foster Care Act.” Though protecting the religious beliefs of those working to provide care for children in a home with a mother and father, the bill died largely due to fears of hurting the Amazon bid.

I talk to believers who work in foster and adoption care. They can’t believe the place in which the culture has put them. They want to provide homes for as many children as possible, but have to do so without getting noticed. If that happens they can end up on the radar of an activist or lawyer and ultimately be given a choice of shutting down or getting in line.

The argument against RFRA always tries to connect a slippery slope mentality, referencing the days of Jim Crow and segregated lunch counters. However, in the 25-year history of RFRA, something like this has never happened.

I wish RFRA weren’t necessary; I really do. But when it becomes painfully obvious how Christian businesses are being targeted due to their religious beliefs, lawmakers have to step up. When looking at other states that have signed it into law, it’s just as obvious RFRA isn’t the boogeyman it’s thought to be.