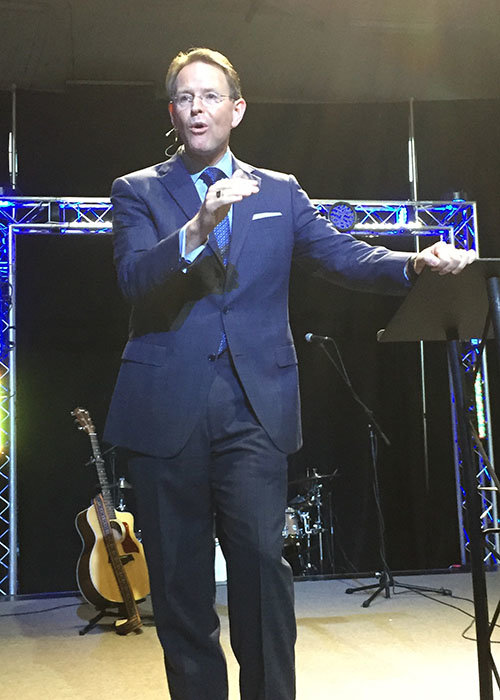 CLEVELAND — Eleven days before his death, Ray Newman was present for the chapel service at Truett McConnell University to hear President Emir Caner announce the establishment of an Ethics and Religious Liberty Lecture Series in his honor.

Dr. Caner’s announcement was made on Nov. 14, 2013. Since that time the University has had some of America’s most notable champions of religious liberty, including Fox News syndicated radio talk show host Todd Starnes and Mat Staver, CEO, chairman, and founder of Liberty Counsel.

On March 6 the lecture series continued with Tony Perkins, president of the Family Research Council, as the guest speaker. In addition to his advocacy for religious liberty, there are numerous social and ethical issues Perkins contends for on a regular basis in Washington.

The FRC president began his message by saying, “I was called to preach when I was 15 years old and started preaching in nursing homes. There is a great similarity between nursing homes and the United States Congress. They are both hard of hearing and slow to move.”

The innovative pro-family, pro-life, pro-religious liberty champion read from Matthew 10:16-39 and challenged his audience of students, faculty, and guests to stand for religious liberty without fear.

Perkins illustrated his point by highlighting the decision of Angela Hildenbrand, the valedictorian of her class at Medina Valley High School near San Antonio, TX, to pray during her graduation speech.

The school was also ordered to remove terms like “invocation” and “benediction” from the graduation program. The judge threatened incarceration for anyone who disobeyed his order.

United States Marshalls were seated in the crowd to make sure the judge’s directives were enforced. Angela said, “Even though the fear of jail was very real, I knew I had to pray.” She did pray and the U.S. Court of Appeals for the Fifth District overturned the lower court’s ruling and protected Angela’s right to pray at her graduation ceremony.

Perkins declared, “Jesus warned his disciples that they would face opposition. He said, ‘He who loses his life for my sake will find it.’ If you follow Jesus in today’s world you will face opposition. 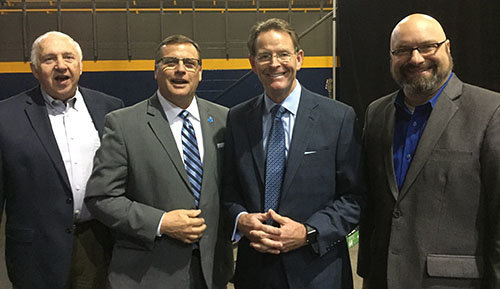 “In Jesus’ day there were people who called Him the opposite of who He was. They called him a ‘madman,’ but He was the ‘Truth’ and the ‘Prince of Peace.’ Joy Behar said Vice President Mike Pence was ‘mentally ill’ because he speaks to God and God speaks to him. To me it is mentally ill to have a one-way conversation.

“In 2016 there were 90,000 Christians killed around the world because they stood up for Jesus. We are sheep among wolves. We couldn’t be more vulnerable.

“If we shrink back in fear there are folks who will not hear us when we share our faith. We need to face our fears with faith and realize that God has not called us into the Secret Service. We are to shout our testimony from the housetop.”

Something missing in the Pledge

Perkins continued, “Jesus said in Matthew 10:33 that if we deny Him before men, He will deny us before His Father in heaven. I don’t think that means that we will loose our salvation. Jesus is living at the right hand of the Father in heaven and he is there to make intercession for us. But if we deny Him before men or back away from sharing our faith because of fear, we will loose him as our intercessor.”

Perkins also emphasized the importance of having a holy reverence for God. He related how “one nation under God” was inserted into the pledge of allegiance to the flag. 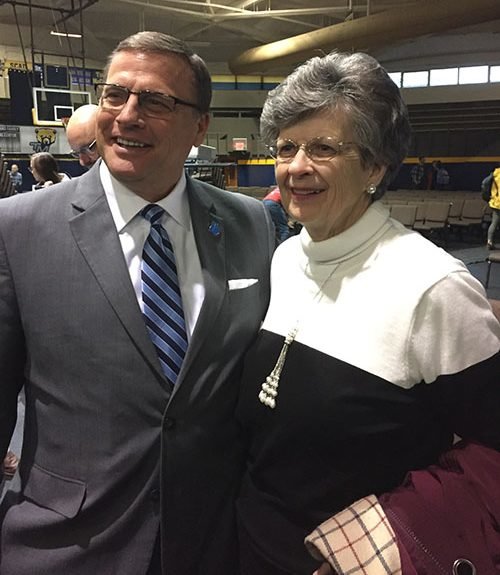 Mike Griffin, current Georgia Baptist Mission Board Representative under the Gold Dome, poses with Gwen Newman, widow of Ray Nerwman, who preceded Griffin as the representative at the State Capitol. GERALD HARRIS/Index

“Dwight D. Eisenhower was worshipping in New York Avenue Presbyterian Church in Washington on February 7, 1954 and heard Reverend George M. Docherty preach a sermon suggesting that the words ‘under God’ be added to the pledge.

“This was during the Cold War and the tensions between the United States and Russia were great. Rev. Docherty stated, ‘There is something missing in the pledge – the characteristics and definitive factor that separates the American way of life from that of other countries.

“'Apart from the mention of the phrase, the United States of America, it could be the pledge of any republic. In fact, I could hear little Muscovites repeat a similar pledge to their hammer and sickle flag in Moscow with equal solemnity.'

Perkins concluded his message by declaring, “Dying and living for Jesus is one and the same. Many say they would be willing to die for Jesus, but are you willing to live for Him?”

He told the story of Meriam Ibrahim, who was sentenced to death in Sudan for apostasy and for marrying a Christian man. Her marriage to Wani, her Christian husband, was declared invalid and she was convicted of adultery and sentenced to 100 lashes.

She was jailed along with her toddler son when she was eight months pregnant and later forced to give birth while shackled to the floor of the prison. She feared that something would happen to the baby during delivery, because she was chained to the floor and could not open her legs.

She was offered a way out of the horrible circumstances of prison life if she would renounce her faith in Christ. Three times she refused to do so.