Tools, they're what you make of them 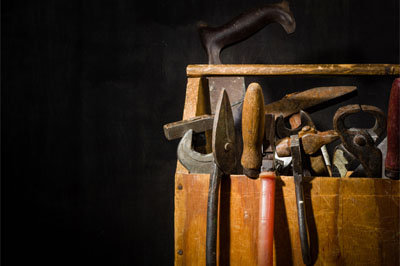 A few different perspectives follow Mark Zuckerberg's testimony this week in Washington. Many agree some lawmakers seemed oblivious to how Facebook worked. A few exchanges highlighted the real concerns all of us should have with how our personal information is marketed. In other instances Zuckerberg backpeddled, hem hawed, and gave a "we'll get back to you" answer.

Something I kept going back to, though, is how at its essence Facebook is a tool. You and I use it to share pictures of what we ate and where we went on vacation, comment on topics of the day, and let everyone know about our favorite team. Groups (like The Christian Index) share what we do. Many churches make Facebook their de facto website.

On the other side of that, Facebook – and social media sites like it – use us as their way to make money. We volunteer information in our posts; they use that information to target us to advertisers.

The effect of tools like Facebook isn't a one-way street. We use tools, but those tools impact us as well. Sure, you can post how great that sandwich was. But is doing that your first thought whenever you have a great sandwich? Is the urge to share that great? That instinctive?

I came across this concept of the effect tools have on us and it made me think of the most important one at our disposal right now.

The Bible remains our most effective tool for how we shape our lives. Various reports and studies place it as the best-selling and most read book in history. Nations have outlawed it and despots ordered it to be destroyed. Colleges have been founded on it. Countless ministries and charities help others based on it. And yes, our county was born out of precepts found in it (I'd go further, but can we at least agree on that, the-Founding-Fathers-were-all-deists people?).

According to the American Bible Society's State of the Bible report for 2017, the Bible remains a book popular with Americans. Twenty percent of our countrymen fall under "Bible Engaged," meaning they see Scripture as the inspired Word of God and read it at least four times a week. Around 38 percent of the population are "Bible friendly," believing it to be the Word of God without error and reading it less than four times a week.

Nearly half of adults (48 percent) feel the Bible should have a great impact on society. Twenty seven percent feel it has just the right amount of influence, whereas 22 percent say it has too much. When it came to the country's morals, a slight majority (53 percent) of adults felt the U.S. Constitution should lead the way. A little less than half (47 percent) felt the Bible ought to hold that position.

We all want a moral society, but people argue about the best way to build one. There are two things I wish I saw more of. One, those of us who believe in the Bible need to allow themselves to be truly challenged by what it says. The second is for those who don't believe in Scripture – that stuff Jesus said about being the Son of God seems to be a hangup – to acknowledge the wisdom in its pages.

That latter point may be closer to reality than we realize. According to the State of the Bible report, 22 percent of Bible skeptics wanted to read the Bible more. Slightly less of those affiliated with non-Christian faith groups as well as those of no faith felt the same way. I find this hopeful.

Our environment shapes us, and fundamentally so. When I make time to read my Bible, it changes how I perceive my surroundings. Talking through passages with my kids is just as much for me as them. The world in which they're growing up doesn't adhere to "because the Bible tells me so" as much as times before. Conversations within a Scriptural context are more important than ever.

It's with this knowledge that I read The New York Times, Washington Post, and other publications many feel are hostile to Christianity. Those are tools as well. It gives me insight as to how I, a conservative Bible-engaged Christian, am perceived. Also, it gives me direction for where I need to see how Scripture addresses the issues of the day.

What would be the result of studying our Bibles to the point that we see others as Jesus saw them? In light of our own sin as well as theirs, how would that impact the conversations we have with them? Would it give us more of an incentive to share that Good News?

Pursued to that end, telling others could become instinctive, even as much as sharing our favorite sandwich.